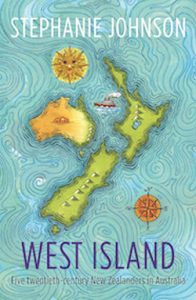 In the nineteenth century Australia and New Zealand were termed ‘the Seven Austral Colonies’. They comprised seven different entities, linked by geography and a common coloniser. Passage between them was frequent, with colonial book companies opening offices, say, in Dunedin, Hobart and Melbourne, and magazines like the Australian Journal having both New Zealand distribution and content. Travel might have taken longer, but the relationship was closer.

When Federation came, one distinct possibility for a while was for West Australia to separate while the other six formed a trans-Tasman nation. It would have been an administrative nightmare, not least in terms of the standing of indigenous people. Yet an Australasian nation persists as a legal option and, in other manifestations, such as the joke advertisement on ABC television’s Gruen Campaign that advocated the invasion of Aotearoa; or when Melbournians painted a huge image of Jacinda Ardern on a Brunswick silo, in appreciation and longing.

Australians have no exact equivalent for the NZ expression ‘West Island’ (let alone ‘Pig Island’), the former an expression both of proximity and ironic appropriation. In this book, West Island signifies the location/dislocation of five creative individuals who left NZ for Australia in the early twentieth century. It was a common destination for the gifted and ambitious, though it tended mainly to be a stepping-stone to ‘Home’, Mother England. Fergus Hume, for instance, departed Dunedin in the 1880s with the intention of becoming an Australian dramatist before conquering British stages. As it happened, he became an internationally successful crime-writer with The Mystery of a Hansom Cab (1886), set in Melbourne.

None of the five in Johnson’s selection did barnstorm England with such success, though some visited the UK. Instead, they lived out their creative lives in Australia. They are diverse – one painter, and four writers whose work ranged from poetry to propaganda: modernist painter Roland Wakelin; bohemian Dulcie Deamer (a friend of Norton’s); journalist Eric Baume; Communist novelist Jean Devanny; and poet and Bulletin writer Douglas Stewart. Wakelin is well represented in galleries, his reputation secure although somewhat less so than his friend Grace Cossington-Smith. The writers, with the exception of Baume, are the stuff of ASAL (Association for the Study of Australian Literature) papers. These four have also faded in popular memory, although three were quite notorious.

‘An odd collection of people’ was literary agent Tim Curnow’s comment to Johnson. Oddest of all, perhaps, is the added presence of Rosaleen Norton, artist and King’s Cross Witch, also from New Zealand. She was perhaps too vivid a subject to exclude.

The appeal of the book should be trans-Tasman, although Johnson comments that its dual nature actually proved problematic for publishers, the New Zealanders regarding it as about Australians and vice versa. It did not help that all the subjects are better known in Australia than their country of origin. The orthodoxy, only recently questioned, that New Zealand’s arts and letters had to be by residents, or about Aotearoa, has influence still. To leave the country, unless returning like a boomerang as Ngaio Marsh did, is to risk being actively forgotten.

This insightful book ought to be read on both sides of the ditch, since it is about the act of migration, an ocean crossing and its effect on the life of art. Like Hume, the five never forgot they were from New Zealand, even if Australia made and changed them. As Johnson notes, they may all have been first-generation Kiwis, but all had a sense of the national identity. It was something ineluctable that they carried on their travels, an invisible cultural baggage.

Johnson is also a prolific fiction writer, and West Island begins with an imagined scene in which her expatriates converge on a Sydney art gallery for Wakelin’s latest exhibition. As in the first act of a drama, it is a neat way of introducing her characters in pen-sketches. She then considers the influence of NZ geography on each of them: Wakelin and Deamer from the Wairarapa, Stewart from Taranaki, Baume from Auckland, Devanny shaped by Collingwood, Dunedin and Wellington.

Two of the males in the group, Wakelin and Stewart, were kindly gentlemen, even quiet, letting their art mostly speak for them. Baume, a rabble-rousing journalist, mass-media personality and popular novelist, had less art but greater force of personality, which he did not always use beneficially. Johnson terms him a ‘shock jock’ whose ghost likely haunts Sky news in the wee hours, seeking discord. The two women were larger than life – Deamer in her leopard-skin outfit and Devanny as both gifted novelist and political activist. Deamer is less interesting as a writer than as Queen of Sydney’s Bohemia; while Devanny’s life was as dramatic as her novels, though the latter have enduring significance.

The book is also a memoir of Johnson’s experience of Australia, where she spent much of her twenties; she has subsequently been a frequent Tasman-crosser. She avoids anything like the Canadian description of America as an abusive neighbour, focusing instead on similarities and differences. Like her precursors in the book, she found the continent bigger and louder than her home country, with mysterious and malevolent fauna. She too fell in love with Sydney and even acquired an Australian accent, albeit temporarily for a part in the iconic film Dogs in Space.

One aspect of West Island she notes is discrimination – against Kiwis and also overtly against Australian indigenes. Her five were products of their time and inevitably politically incorrect by today’s standards. Wakelin alone is exempt from such aspersions, but it tends to be harder to read the politics of a visual artist from their work, unless they are a cartoonist like Norman Lindsay (who illustrated Deamer and was great friends with Stewart). Lindsay drew well but depicted dire racism.

When her subjects write about Māori, Johnson notes, they invariably get into trouble – from our point of view. She does not suggest that non-Pakehā should be verboten, far from it. In her discussion she contrasts Baume’s outrageously racist depictions with those of Devanny, which were rather more sympathetic. For comparison purposes she briefly introduces another Kiwi, Ruth Park and her novel The Witches’ Thorn: although Park displays less racism she still makes modern readers cringe. Even Douglas Stewart, urbane and civilised, was guilty of cultural crimes. One of his short stories had the effect of making Witi Ihimaera throw Stewart’s book out of a schoolroom window; he resolved at that moment to become an author himself, in order to represent Māori from their own viewpoint.

Johnson appears to feel more affinity for two of her subjects, and so devotes more space to them. Stewart’s writing is examined through quoting from and commenting on a biographical interview, in the process giving his rather fine poetry its due space. She also notes his support of other, often more important, writers on both sides of the Tasman. Johnson admits she would have liked to know Devanny the most, and writes with empathy of her progress from working-class housewife to novelist and left-wing activist, a life both tragic and highly fulfilled in the artistic sense.

For those Antipodean creatives who find themselves with loyalties on both sides of the Tasman, Johnson offers a telling image. She imagines Devanny regaining her literary ground and readership by occupying a small island of repute. It is not Magnetic Island, offshore from the Townsville of her final years, but something likely more bleak and windswept in the middle of the Tasman. The position enables both West Island and the Shaky Isles to lay claim to Devanny, an ideal situation for a writer whose nature it is to seek maximum readers.

Ultimately West Island details transnationalism as part of the personal artistic project. Had Wakelin stayed in New Zealand he would not have gained the same regard as a modernist painter; nor Stewart his reign over the Bulletin Red Pages and eminence as a poet. The Australian experience suited Devanny, whose personality Johnson comments was ‘big and abrasive … more suited to perhaps stereotypical notions’ of Skips [Skippy the Kangaroo, an iconic Australian cartoon character]. She also writes feelingly of the late John Clarke, who found a happy working niche in Australia; New Zealand became for him a distant, affectionate presence.

West Island succeeds – an intriguing, idiosyncratic account that adds significantly to the artistic dialogue between two South Pacific neighbours. Johnson sounds a warning note, however: due to recent immigration laws, the free passage of the arts worker from New Zealand to Australia is increasingly limited unless one is accompanied by money. That is a grievous pity, as the latter has gained so much from the five Tasman-crossers; they in turn gained so much from the experience.