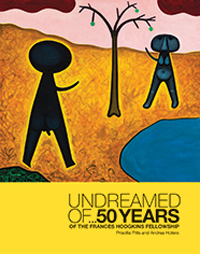 It’s tough being an artist in Aotearoa – it doesn’t exactly come with the flotilla of perks and acknowledgements one might find in countries less suspicious of culture. Even so, there is a lot more in the way of laurels available now than there was back when the Frances Hodgkins Fellowship was the only one. Established at the University of Otago in 1966 through the efforts of Charles Brasch (1909–1973), and named after the nation’s most famous expatriate artist, it has long been one of the most prestigious awards for a New Zealand artist, with the financial freedom of a lecturer’s salary, a studio to work in, and some of the most extraordinary cultural resources in the country. Unlike its sister fellowships, the Burns (writing) and the Mozart (music), the Hodgkins is something of an outlier in that the university has no art school; that’s the province of Otago Polytechnic – ‘Olam’ to Elam and Ilam – and a very fine producer of talent.

Half a century later, the fellowship is rightly celebrating fifty-one years (despite the title) and forty-nine artists (Marté Szirmay, 1971–72, and Fiona Pardington, 1996–97, both held it for two years in a row), with the splendidly designed and produced volume, Undreamed of… 50 years of the Frances Hodgkins Fellowship. The fellowship programme began precociously with the then controversial painter Michael Illingworth, and concludes here with the 2016 resident, Miranda Parkes. Fifty years is ample time to give the publication a sense of serious impetus – and indeed importance. The main critical texts have been written by the former Dunedin Public Art Gallery (DPAG) director and art critic Priscilla Pitts, while interview-based texts are provided by writer Andrea Hotere, daughter of the artist Ralph Hotere, who was the fourth recipient of the award, in 1969.

The title comes from a letter from Hodgkins at her Suffolk studio, to her patron, gallerist and close friend (some have speculated more than that) Lucy Wertheim in 1930, thanking her for some funds: ‘This present line of work is good … I have got well into the spirit of the place and it is yielding up riches – undreamed of, at first sight – I am glad I have stayed here & got so into rapport with the country …’ Hodgkins knew all about the difficulties of sustaining a practice and oneself at the same time. Her Bloomsbury contemporary Virginia Woolf famously described it as ‘a room of one’s own’ – a creative, if not always physical space, where possibilities can be explored without distraction.

Historical significance abounds, as this is period over which the New Zealand art world evolved and professionalised into something self-sustaining, contemporary, and free from the burden of cultural cringe. While the Helen Hitchings Gallery had a brief run in Wellington from 1949 to 1951, and Peter Webb’s Argus House gallery in Auckland in the 1950s, it wasn’t until Barbara and André Brooke opened their Gallery 91 in Christchurch in 1959, and Peter McLeavey his Wellington gallery in 1968, that any sort of commercial art market kicked off. Becoming a full-time artist was something that art school graduates could then reasonably aspire to. The Hodgkins fellowship gave them something to aim for. It also kept the South Island relevant, the centre of activity having moved north of Cook Strait around the same time Colin McCahon did in 1953. Even now it’s tough going, and the support the Hodgkins and other fellowships provide is an important respite from the slog and hustle.

And now we have this beautiful book – unmistakably the elegantly modernist work of DPAG designer Karina McLeod. It’s an extraordinary record of a very diverse assemblage of New Zealand practitioners temporarily linked geographically and institutionally over a broad swathe of time. Joanne Campbell’s section on the founding of the fellowship is useful and thorough. It begins with the famous quote from a 1921 letter from Hodgkins to her mother: ‘Don’t let N Zealand wait to put up a memorial tablet to my memory – let her help me now whilst I am still working at work that I hope will live after me.’

Charles Brasch certainly knew the phrase, having underlined it in his copy of Eric McCormick’s 1954 study of Hodgkins. Brasch, of independent means, a poet, keen patron of the arts and founder of Landfall, is prominent in the cultural history of New Zealand (at least, as viewed from the south), not only for his munificence in supporting writers and artists, and his advocacy for the arts to the government, but in promoting modernist trends mid-century when culture was for women, foreigners, communists and homosexuals, and philistinism a smug, bourgeois virtue. He did this very much behind the scenes, not wanting to be a public figure, but it is he who is the key figure in the foundation of the fellowship.

The DPAG has long played a support role, particularly since the 1990s, with an increase in emphasis on contemporary New Zealand art, but this has always been an informal relationship. The Hocken’s consolidation provided a guaranteed exhibition space, spiritual home, and institutional advocacy and support.

One of the excellent things about the book is that each artist gets a respectful amount of space in terms of illustration and text, which is especially nice in cases where the artist is less well known. The silversmith and sculptor Tanya Ashken, for example, second recipient of the fellowship, is probably not all that familiar to a non-specialist audience, yet did much to fire up New Zealand’s contemporary jewellery scene when she arrived here from the UK in 1963. Likewise, sculptor and installation artist Siegfried Köglmeier, the 1990 recipient, who has lived in Germany since 2000 and, due to the tragic loss of his partner Gabi to cancer and the responsibilities of supporting two children, only recently returned to art-making. The book marks a timely acknowledgement of Nicola Jackson in 1994, working mostly off the radar in Dunedin, and recently given her dues with a survey show at DPAG.

The entries aren’t overly cluttered with footnotes, emphasis largely being on interviews with the artists themselves where possible. There’s a diversity of practices too: Jeff Thomson was an interesting choice for 1995 with corrugated iron as his medium, and subject matter the overly scrupulous might call kitsch. Art is a house of many mansions.

It stands out that, while providing less than ideal numbers statistically (roughly once a decade), Māori participation has been there from relatively near the beginning rather than merely as an afterthought: Hotere (Te Aupōuri and Te Rarawa), Matt Pine (Te Ati Hau Nui-a-Paparangi, Te Atiawa [Taranaki], Tuwharetoa) in 1979, Shona Rapira Davies (Ngāti Wai) in 1989, Fiona Pardington (Ngāi Tahu, Kati Mamoe and Ngāti Kahungunu) in 1996–97, and Shane Cotton (Ngāpuhi) in 1998. Alarmingly, though, even that seems to evaporate thereafter, rather than increase as I would have expected, and is a matter I would have hoped the book would have addressed, at least in passing. On the other hand, in recent years, selection has also skewed a lot younger with outstanding shows by the likes of Eddie Clemens in 2009 and Joanna Langford in 2010, which is great for a lot of emerging artists, but ‘emerging’ doesn’t and shouldn’t always equate to young.

The book also reminds us that the fellowship has been open to some quite controversial choices. In the mid 60s it didn’t get much more controversial than Illingworth’s paintings of stylised nudes performing their bodily functions. The identities of photographer Christine Webster’s fetishistic, carnivalesque nudes from her 1991 residency will probably be recognisable to anyone on the Dunedin art scene in the 1990s. Ava Seymour (2001), Rohan Weallens (2005) and Heather Straka (2008) have all, at various times, gotten the public’s jimmies rustled. There have also been some inspired choices, such as the ferociously talented Joanna Margaret Paul in 1983 (taken from us all too soon), and the staggeringly brilliant Kushana Bush in 2011.

Otago University Press has been producing some excellent art books lately, and Undreamed of… 50 years of the Frances Hodgkins Fellowship is no exception. One of the best art books to come out this year.

ANDREW PAUL WOOD is an independent cultural historian, curator, consultant and critic. His most recent book was a translated collection of the poetry of the German-Jewish refugee poet Karl Wolfskehl, and he is currently working on a cultural history of the pavlova.