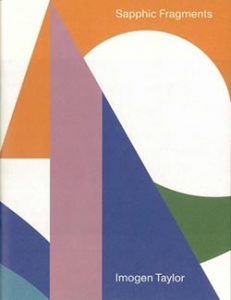 Sapphic Fragments is an intimate, provocative and critical publication that is in conversation with artist Imogen Taylor’s exhibition at the Hocken Collections gallery in Ōtepoti Dunedin in early 2020, and her eleven-month residency as the 2019 Frances Hodgkins Fellow. The Fellow’s publication is ever increasingly becoming an integral component of the residency ‘outcomes’, and Taylor’s is no exception. Slightly smaller than A4, with a soft card cover and a geometric-patterned, light gsm dust jacket, Sapphic Fragments, as an aesthetic object, sits partway between high-end artist’s workbook and Moleskine stationery. The considered intimacy of the book’s exterior is continued between the pages with the inclusion of iPhone photos taken either by Taylor or partner and architect Sue Hillery. This naming of Sue Hillery as Taylor’s partner is significant for several reasons that encompass Taylor, Hillery and contemporary lesbian/queer visibility while also reaching back into the past of Hodgkins (1869–1947) and her ‘friend’ (lover), Dorothy K. Richmond. Sapphic Fragments can be interpreted as an act of reframing, repositioning and reclaiming elided intimate histories (personal and artistic), while agentially self-positioning Taylor (and Hillery) in an attempt to prevent present or future homophobic omissions. From design to photographs and text, the publication materialises the politics of queer intimacy, collaboration and reclamation.

Begin with the dust jacket. The inside flap extends almost to the first—and correspondingly last—inside page(s) of the book. Lifting this reveals—as if hidden and waiting to be discovered—a collaborative watercolour painted by Taylor from a design by Hillery. At almost four full page-widths, this watercolour drawing prefigured the large wall-based painting titled Double Portrait: Screw thread, by Taylor and Hillery, which stretched along one wall in the Hocken’s central gallery. With the titular phrase ‘Double Portrait’, Taylor references one of Frances Hodgkins’ most well-known paintings, Friends, Double Portrait (1922–25), which depicts friends and lovers Jane Saunders and Hannah Ritchie (reproduced on page 2 of Sapphic Fragments). Hodgkins, especially her sexuality, pervades this publication—to a degree that goes beyond homage and insists that who she loved and painted are foregrounded. She is present in different manifestations in each of the photographs of Taylor’s set-up in the Hodgkins studio that open and close the book’s interior. The opening photograph includes the book Letters of Frances Hodgkins (1993), edited by Linda Gill, while the closing one features a framed reproduction of Hodgkins as bohemian, industrious with a handful of paintbrushes, and mildly put-out or self-possessed.

Eight quotidian and at times erotically charged iPhone photos span the formality of the Foreword (author not specified) and the insurrection of the first short essay, ‘Notes on “Queer Regionalism”’ by art historian and curator Milly Mitchell-Anyon. The title nods to Susan Sontag’s essay ‘Notes on Camp’ (1964), from which Mitchell-Anyon later quotes, while the text deploys single- or double-word bolded titles instead of Sontag’s numbers to frame short thematic paragraphs. This format contributes a punchiness to the pointedly irreverent, savvy and at times declarative style of Mitchell-Anyon’s text, while simultaneously reproducing in textual form the ‘fragments’ of Taylor’s exhibition and publication, which in turn derives from Sappho’s remaining poetry. Mitchell-Anyon’s manifesto-like text tackles several themes including provincialism, lesbian/queer invisibility, coding, erasure, camp, desire, and ‘queer tactics’ that reclaim lesbian sexuality through a combination of anecdotal (queer) experiences and in-depth research in order to make connections between Hodgkins and Taylor that include sexuality and artistic practice.

A generous centrefold showcasing Taylor’s work bridges Mitchell-Anyon’s essay with that of author Joanne Drayton. Titled ‘Imogen Taylor’s Sapphic Fragments’, Drayton’s essay picks up and expands on the preceding connections between Hodgkins and Taylor. Drayton begins with a historical account of Hodgkins’ financial difficulties as an artist to link her to Taylor by way of the Fellowship (in Hodgkins’ name, which she herself hypothetically would have benefited from). From historical biography, Drayton employs her skills as a biographer to describe Taylor’s arrival in Ōtepoti Dunedin, before undertaking an attuned formal appraisal of Taylor’s work, writing that she ‘forces her own language of queer formalism’ and in dialogue with Mitchell-Anyon’s Notes suggests that Taylor is ‘probing around for a queer kind of formalist regionalism’ (p. 41).

These links between texts, alongside the publication’s design by Ella Sutherland, make Sapphic Fragments a congruent publication that is both aesthetically pleasing and critically stimulating. 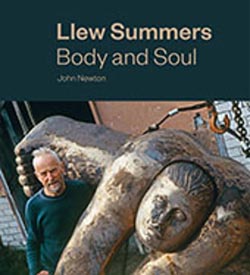 For those who have spent time in Ōtautahi Christchurch as a resident or frequent visitor, the large, heavy-limbed sculptures of women, dancers, athletes and lovers by Llew Summers (1947–2019)—encountered perhaps when walking through public spaces such as parks and gardens—will be familiar. Given the impossible task of public art to appeal to all (or to offend as few people as possible), Summers’ robust, chunky, anatomically imaginative nudes attracted both appreciation and criticism during his lifetime, which author John Newton discusses candidly in his warm and thorough account of Summers’ life and work. Newton’s observation of Summers’ mixed artistic reception is of course commonly experienced by many artists and writers, but it would be fair to suggest that some artists polarise audiences more than others, especially those operating in the public sphere.

Summers, as a primarily self-taught and highly industrious artist who bypassed formal trajectories such as art school, grants and residencies in favour of determining his own path and methods (including the installation of works in public places without permission early in his career) has been sidelined from critical art world appraisal. As Newton notes, Summers’ last critical appearance in Art New Zealand was in 1987. This disjuncture between Summers’ formal art historical exclusion and his informal public appreciation (though not without detractors) constitutes the central thematic of Newton’s text, though it never overwhelms. It is evident in the Introduction with the author’s relatively subtle statement, ‘the art world, by and large, has always known him in reductive terms’ (p. 8), and in the Epilogue by way of a comparison with poet Sam Hunt. Newton, proposing that both Summers and Hunt experienced critical elision from their respective fine art and literary establishments, writes, ‘They remind us of how much is always being excluded, cast into shadow by whatever creative protocols are currently in favour’ (p. 178).

Newton’s chronicling of Summers’ life and work, which unfolds over six chapters between the Introduction and Epilogue, elaborates events and actions in the artist’s life, and details characteristics of the artist himself that, in concert with cultural shifts, resulted in a certain marginalisation of his work. In addition to Summers’ lack of formal training, the artist’s tenacity to do things his own way involved a degree of pragmatism, commercialism and self-promotion, all of which further distanced him from art-world norms and values (though the prevalence of social media brands today significantly diminishes the charge of self-promotion). As Summers himself suggested (p. 175), it was his insistence on the human form—over institutionally accepted practices such as abstraction and conceptual art—that hindered his reception. Yet Summers was not the only artist making figurative works in the period between 1967 and 2019, so it is not simply figuration, but the way in which Summers approached and rendered the human form. Newton’s phrase ‘maverick traditionalists’ (applied to Summers and Hunt, p. 175) accurately captures the art world’s response to Summers’ work as formally conservative and occasionally naïve, which follows an earlier juxtaposition made by Newton between Summers’ ‘accessibility’ and the ‘rarefied’ attitude of art dealers (p. 99).

Without unduly retrenching this binary, Summers’ exclusion from official narratives and high-profile galleries inevitably informs wider opinions of the artist’s work, and Newton himself admits this influence. In the Introduction he writes, ‘If this text has one primary ambition … it is to guide readers beyond the preconceptions that I first brought to the work myself’ (p. 8). Without detailing these preconceptions (though they are perhaps apprehensible in the broader reservations discussed above), Newton does outline Summers’ generosity and hospitality—he lived in the artist’s ‘gatehouse’—as the conditions under which he came to know and appreciate Summers and his work. The two men’s friendship was cut short by Summers’ untimely death on 1 August 2019, and Llew Summers: Body and soul embodies Newton’s affection for, and esteem of, Summers, while also being an informed, considered appraisal of the artist’s work. Newton draws on archival material from Summers’ own records, early exhibition reviews, and interviews with Summers in his last years, which are incorporated seamlessly into the author’s clear, informative and lucid text.

With this publication, Newton successfully balances several potentially conflictual objectives: tribute, artist monograph and aesthetic rehabilitation. These objectives, particularly the last two, could be stymied by Newton’s admission that he is neither art critic nor biographer (p. 7), but this does not hinder his ability to give a rounded account of Summers’ life, to make proportionate connections between biography and artworks, and to identify thematic or formal developments and reappearances in Summers’ oeuvre. Perhaps fittingly, Newton focuses primarily on Summers and sparingly on contextualising or comparing Summers’ work with that of his contemporaries. Above all, Summers would have wanted this book to be widely accessible, and Newton has accomplished this with understated elegance.