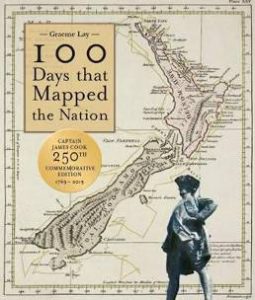 This is the first Cook book I have ever reviewed, although I have managed a couple of large tomes on French exploration in the Pacific, and taught Honours courses on early New Zealand featuring the outstanding navigator from Yorkshire. Such books will appear relatively frequently over the next few months as the 250th anniversary of Cook’s arrival is commemorated. Unlike most recipe books, however, some of these publications are destined to be controversial. One of the reasons for the contentious nature of the Cook story is that some Polynesian historians, like Haunani-Kay Trask of Hawai`i, see Cook as personifying all the baleful impacts of colonisation upon indigenous peoples. Some Māori commentators, including descendants of Rongowhakata, the iwi settled around Gisborne, feel much the same way. They cite the killing of nine of their tīpuna and current problems – such as the high prison incarceration rates of Māori, on-going poverty and educational underachievement – in support of their claim that European colonisation of New Zealand has seriously damaged the indigenous people of the last major land mass on earth to be settled by humans. Such critics seem set on supporting the now rather outdated notion of the ‘fatal impact’ of colonisation, which portrays all indigenous people as hapless victims without any historical agency.

Another contributing factor in the contentious nature of the commemorations, on the other side of this simmering debate, is that older New Zealanders were brought up on texts like Our Nation’s Story, which portrayed Cook as a superhero and failed to mention the extraordinary achievements of ancient Polynesian navigators and sailors, despite the astonishing research of Te Rangi Hiroa (Sir Peter Buck). J.B. Condliffe’s Short History of New Zealand (1925) did rather better in this respect, as did Whitcombe and Tombs The Young Dominion, also published in the 1920s. E.K. and Alan E. Mulgan’s The New Zealand Citizen, again published in the 1920s, however, made the rather startling claim that British Imperialism was based not on ‘force’ but on the ‘principle’ of governing ‘for the benefit of the governed’, before informing its young readers that the British had ‘an unrivalled ability to govern subject races by which is meant the millions of coloured people of various nationalities and religions who live within the Empire’ (pp. 33 and 39–40). Much of this chronic imbalance has not really been corrected at the more popular level since World War II – despite the major publications of J.C. Beagehole on Cook, and the efforts of some New Zealand historians and history teachers to fill in the large gaps over the last 40 or so years – because so little of our history has been taught in schools. Hopefully the decision to teach a more ‘honest’, ‘warts and all’ version in schools will expand knowledge as well as restore balance.

Meantime Graeme Lay, Bill Ralston and Gavin Bishop have written crisp and balanced pieces in recent Listeners (12–18 October and 26 October–1 November 2019), pointing out that such condemnation of one commander is somewhat unfair given that Cook was deeply upset by the unfortunate beginnings of contact between two very different cultures. Under instruction from the British government he tried hard to avoid any repeat of violent clashes. As Lay points out, the Royal Society’s ‘Hints’ ‘embodied the “Enlightenment” spirit of enquiry and tolerance’. Lieutenant James Cook was warned that ‘shedding the blood’ of the people he encountered was ‘a crime of the highest nature’.

Lay could have added that pernicious, pseudo-scientific ideologies such as ‘social Darwinism’ and ‘eugenics’ did not emerge until the second half of the nineteenth century, before evolving into the ‘white supremacist’ views that scarred the American south, Fascist Europe and parts of the British ruling class. ‘Enlightenment’ thinkers undoubtedly fostered paternalistic attitudes, but also espoused rather nobler notions such as ‘the brotherhood of man’.

Lay seems well qualified to write on the three voyages: he has published a lot on the Pacific, especially Tahiti and the Cook Islands, and has produced three novels relating to Cook. As a result this handsomely produced book is well worth the purchase price. Although Lay’s book tends to veer away from a more critical approach to Cook, he provides a balanced and informative account on many aspects of the bigger story of Cook’s arrival in Aotearoa/Te Wāhi Pounamu. He adds much to J.C. Beaglehole’s and other authors’ earlier work, some of which now seems rather old fashioned. Lay is especially helpful on the ships themselves, other crew members on each of the three voyages, and the long-suffering Mrs Cook.

Like the late Harry Morton, Graeme Lay is an accomplished sailor and knows a lot about the ships and navigational achievements of Cook. Each of his short chapters reveals much about the cramped and limited ships Cook commanded. Tiny and inadequate as these colliers seem to modern observers, the Endeavour on the first voyage (1768–71) and the Resolution and Adventure on the second (1772–75) were superior to those of Dutch sailor Abel Tasman in that they could at least sail into the wind. Both ships were also reasonably stable despite relatively shallow draft. Cook chose them for their suitability for charting new coasts and sea beds, and generally chose well. By 1776 and the third voyage, however, the Resolution had suffered some deterioration from the long time spent in freezing waters near Antarctic. The Adventure was too small and slow for long-range voyaging and was replaced by the Discovery in the unsuccessful quest for the North-West Passage. Despite the reservations of his long-neglected wife, Cook could not resist the pull of the sea and set off at the relatively advanced age of 48 on this, his fatal last voyage.

Cook also had a large advantage over Tasman in that by the second voyage John Harrison’s more accurate chronometers (small reliable clocks that replaced cumbersome and large earlier prototypes) made it possible to calculate both longitude and latitude.

Managing crews on long voyages was difficult as no one knew about vitamins in the eighteenth century, although Cook did make some progress in terms of his men’s health. Sailors who lack Vitamin C suffer from scurvy, which causes teeth to fall out and the afflicted to waste away and die in agony. Cook managed to avoid deaths from scurvy by supplying vegetable soup on the first voyage, and added sauerkraut, carrot marmalade and malt-based wort (for constipation), on the second. He enforced this diet – whereas Tobias Furneaux in command of the Adventure did not, and lost men to scurvy. Eighteenth-century ignorance of how disease is transferred also meant Cook was unable to prevent twenty-two of his men dying of dysentery after visiting Batavia on the return voyage to England. The Raiatean navigator and translator Tupaia and his servant Taitata also died in Batavia.

Lay writes well about the other important passengers on board Cook’s ships including: Tupaia and Omai, another Raiatean who ended up in London; other commanders such as Furneuax, John Gore, William Bligh and George Vancouver; scientists such as Joseph Banks, Daniel Solander (whose efforts are commemorated on the ceiling of the University of Stockholm underground station) and the Forsters –German father and son Johann and George; along with artists such as Sydney Parkinson, William Hodges and John Webber. Lay also writes a sympathetic essay about Elizabeth Cook, the ‘unsung heroine of James Cook’s life’, who outlived all her six children (two died in infancy) and died at the great age of 94. It is hard to dispute Lay’s assessment of most of the key documents associated with Cook, but his implication that Cook’s journal is about as phlegmatic as fellow Yorkshireman Geoffrey Boycott’s cricket commentary contrasts with the views of my students – who uniformly expressed surprise at how progressive they found Cook’s views on indigenous cultures.

The book is written in crisp, clear prose and is generously illustrated with numerous colour reproductions, photographs taken by the author himself and various maps and charts. Some of the paintings deserved longer captions because they often tell us more about European artistic fashion than they reveal about peoples and places of the Pacific, but together they complement the text and enhance the narrative. New Holland has made an impressive job of the publication, although the absence of macrons on Māori words will raise a few eyebrows. Lay also makes it clear that Cook suffered from human frailty and became increasingly irascible as his health worsened due to the constant long-range voyaging.

On balance this book is a useful introduction to Cook and his endeavours, but anyone who wants to complicate the story by adding a post-colonial dimension must read anthropologist and historian Ann Salmond’s magisterial trilogy: Two Worlds: First meetings between Māori and Europeans, 1642–1772 (1991), Between Two Worlds: Early exchanges between Māori and Europeans 1773–1815 (1997) and The Trial of the Cannibal Dog: The remarkable story of Captain Cook’s encounters in the South Seas (2003). Readers wanting more on discovery by Eastern Polynesians and the development of Māori culture should add Atholl Anderson, ‘Te Ao Tawhito: The old world’ in Anderson, Judith Binney and Aroha Harris, Tangata Whenua: An illustrated history (2014), pp. 16–189. The late Geoff Park’s Nga Uru Ora: The groves of life also has a very interesting take on Cook and Banks’ response to their visit to the Thames area. And anyone looking for a different kind of Cook book should keep an eye out for a new publication from Tony Ballantyne of the University of Otago. Gaining a more balanced perspective on the story of Cook’s ‘rediscovery’ of Aotearoa/New Zealand requires the reading of several specialist volumes rather than one general overview. Sharon Dell’s carefully balanced exhibition at the Hocken Library, on Cook and southern New Zealand, also helps restore balance to a debate that is destined to be ongoing. Families will also benefit from acclaimed children’s authors Tessa Duder and David Elliot’s new book on Cook and his maps.

TOM BROOKING is Emeritus Professor of History at the University of Otago. He is currently co-editing with Dr Todd Thomson of Biola University, Los Angeles, volume five (1776–1918) of a six-book series on the cultural history of democracy, for Bloomsbury. A base at the Centre for Sustainability is proving helpful in assisting his retirement project of producing an overview book on the history of rural New Zealand for Otago University Press.