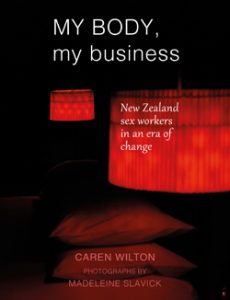 Oral history took off from the 1970s as a way of recording the lives of those who were absent from the written record. Prostitution has, in fact, never been absent from the written record: in nineteenth-century Britain there was an explosion of interest in the subject, particularly aroused by W.T. Stead’s Maiden Tribute to Modern Babylon. Debates raged over licensing, regulation and ‘instrumental rape’ – the latter referring to compulsory examination of women under the notorious Contagious Diseases Act (also introduced in New Zealand), which focused on women only while male clients went scot-free. But while much ink was split on the issue, prostitutes themselves were rarely given a voice: others spoke for them, whether anti-C.D. Act campaigners such as Josephine Butler, or those medical men who believed that venereal diseases could be better controlled through regulation.

New Zealand undertook a world first in 2003 with the decriminalisation of sex work, a parliamentary victory reliant on one vote – which indicates the reluctance to sanction such a change. Caren Wilton’s oral histories aim to capture the lives of prostitutes who worked before and after the law reform in order to explore the impact it has had on sex workers. The life stories of ten women and one man are captured in this book. It is difficult not to feel a sense of intrusion in reading it: I for one rarely read about the sex lives of others. I had, however, just been absorbed in reading Jeffrey Eugenides’ Middlesex, which gave me a much deeper appreciation of gender dysphoria, a theme that emerges in Wilton’s book.

Wilton aimed to find out about her subjects’ early lives, what led them into prostitution, how they viewed clients, their health, interactions with the law, experiences of violence and stigma, their involvement in advocacy and their experience of decriminalisation. All these themes are covered, but with just eleven selective interviews, it would be difficult to come to any generalisations. A number of her interviewees have been involved with the Prostitutes’ Collective and it was fascinating to read the story of its founder, Dame Catherine Healy. The interviewees are people in control of their lives and able to give a good account of their work.

Shareda grew up in a large Māori family and early on was recognised as being a ‘girly’ boy. At fourteen, dressed as a girl, Shareda was making money on the street in Auckland, before eventually moving to Wellington where transgender icon Carmen’s reputation had made life easier for transsexuals. Shareda ‘didn’t really enjoy selling myself. It’s business.’ It was ‘only a means to an end’, and drugs made the work easier. After insecure factory and cleaning work, rescue came from Catherine Healy and the Prostitutes’ Collective in the form of an office job, working with the community Shareda knew and enjoyed.

At the age of 47, Mistress Margaret met the man who became her mentor. Worn out from looking after a husband hospitalised after a serious accident, and from her demanding job and the needs of her thirteen-year-old son, the suggestion that men liked to be dominated and would pay good money for it presented an opportunity. The work was creative, it involved ‘writing the play as you’re going along’, and there were plenty of customers with different types of fantasies from being mothered in nappies to bondage and discipline. According to Mistress Margaret, ‘there is a fantastic range of scenes that people want’. She regards her work as providing a safety valve for generally happily married men, who range in age from 19 to 87. She doesn’t have intercourse with her clients, but for most the session ends in masturbation and orgasm.

One of the constant themes of these stories is the need for money. Mothers look for ways to support their children and for work that won’t interfere too much with family life. When and where that work takes place leads to varying levels of risk and exploitation. In the 1990s massage parlour clients would pay at the door; the sex worker, expected to perform naked, would have to negotiate their own fees for extras in the room, which often meant not getting paid at all. Kelly confronted the owner: ‘I’m going to tell the staff right now that they don’t get their clothes off until they’re getting money.’ She saw her role as educating others in the industry and saw safety in the group environment. Being required to do outcalls, as was the case in some Auckland brothels, was too dangerous in Kelly’s view. She’d had a terrifying experience in Australia and refused to do outcalls thereafter.

Before decriminalisation, police entrapment was not uncommon – police were apparently best recognised by their shoes. In the 1980s the sex workers’ lack of rights led to the formation of a wider organisation. Catherine Healy spent nine years as a schoolteacher and was keen to do something else. She answered an advertisement for a job as a receptionist in a massage parlour, knowing nothing much about what went on there. Then, like others recorded for this volume, she ‘jumped the desk’ into sex work. In 1986 she was able to earn $2000 a week, which she found ‘very empowering’. From her teaching background she knew about unions and so the Prostitutes’ Collective was born. Catherine understood that decriminalisation was essential to improve conditions in the workplace and to deal with the stigma associated with the work. AIDs was a real threat and something needed to be done. Funding to assist with safety initiatives came from the Health Department in 1988, and the organisation grew from there. Decriminalisation came about as a result of Labour MP Tim Barnett’s private member’s bill on 25 June 2003. Suddenly, sex workers no longer had to hide in the shadows and could be more assertive about their rights.

Caren Wilton has turned hours of transcripts into readable narratives in which brave individuals share the stories of their usually stigmatised lives. We learn how they told their families, their children and their partners of their occupation. We find out the tricks of deception their work involved, and the dangers of being found out. Many record the solidarity of their work communities and the friends they have made. Some have continued in their work, others have been glad to give it up. Wilton has rescued these lives from stigma and oblivion, recording them for posterity. Her subjects have been generous with their time and insights.

For me, the book raised further questions about social change, the boundaries between fantasy and reality and the double lives of clients and providers. Those questions are not explored here but the existence of the interviews will be invaluable for researchers in the future.

BARBARA BROOKES is a professor of history at the University of Otago. Her research field embraces gender relations in New Zealand, and the history of health and disease in New Zealand and Britain. She has written and co-edited many publications, and most recently her sole-author work A History of New Zealand Women (Bridget Williams Books, 2016), won the Ockham New Zealand Book Award for Illustrated Non-Fiction.