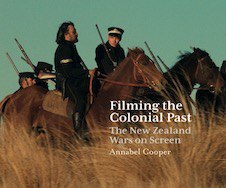 Over the past few years in Aotearoa New Zealand there has been increasing demand from high-school students, iwi representatives, academics and musicians alike for a more nuanced, meaningful acknowledgement of the colonial conflicts of the nineteenth and early twentieth centuries and their legacies. Annabel Cooper’s Filming the Colonial Past: The New Zealand wars on screen is part of the answer to that demand. Cooper’s book is not a war history; aside from a succinct, three-page overview of the New Zealand Wars in the introduction, the book’s focus begins in 1925, nearly a decade after their (debatably) final conflict. Instead, and equally as important, the book is a history of historicisation: of how the New Zealand Wars have been remembered, negotiated, re-enacted, represented, viewed, taught and mythologised through film and television over the last century – and by whom.

Filming the Colonial Past is the first book to deal exclusively with audio-visual representations of the New Zealand Wars, previously only discussed in individual journal articles or chapters of larger anthologies about historical film or national cinema. Across its nine chapters, the book examines over twenty texts, beginning chronologically with Rudall Hayward’s first Rewi’s Last Stand (1925) and The Te Kooti Trail (1927). It goes on to cover the most well-known wars films – the second Rewi’s Last Stand (1949), Utu (1983) and River Queen (2005) – and television shows – The Governor (1977) and James Belich’s The New Zealand Wars (1998). It also explores lesser known texts that have rarely, if ever, been written about, including The Killing of Kane (1971), Greenstone (1999), Frontier of Dreams (2005) and Stories of Ruapekapeka (2017). A few peripheral texts are absent, such as Stuart Main’s Twlight of the Gods (1995), but on the whole Cooper’s coverage is comprehensive. In the final chapter Cooper explores how the New Zealand Wars are being represented on ‘new screens’, analysing texts such as Marcus Winter’s YouTube video ‘The Battle of Gate Pā Told in Sand’ (2014), and Ria Hall’s music video based on the battle of Pukehinahina, ‘They Come Marching’ (2017). Every chapter is replete with colour images of screen-caps, posters and behind-the-scenes photographs that evoke the content, style and context of each case study.

Cooper takes this broad range of case studies and ‘set[s] them deep’, examining the personal, industrial and socio-political contexts of their production. The book’s central thesis argues all New Zealand Wars screen representations are products of cross-cultural collaboration. Cooper’s research looks beyond the directors of each case study (who are almost exclusively Pākahā men) to explore how Māori have exerted agency as historical advisors, cultural advisors, writers, producers, crew, cast, financers, hosts, audiences and critics: ‘although Māori have only recently occupied the director’s chair, this book shows that Māori influence has been exercised from the very first films’. Where previous short form studies have been largely limited to an auteur framework, Cooper uses the opportunity for depth and detail that book-length research provides to treat film and television as truly collaborative mediums.

For the chapters on the early case studies, all directed by Rudall Hayward in the early to mid–twentieth century, Cooper digs deep into the archives to uncover more about the relationships between Hayward and the iwi whose history his films sought to re-enact. Extensive research into the personnel involved in Rewi’s Last Stand (1949) reveals evidence that some Tainui Māori had a stronger influence on the film than was previously assumed. While other literature generalises the film’s funding body, the Te Awamutu Historical Society, as a Pākehā ‘settler organisation’, Cooper reveals Raureti Te Huia (whose father and grandfather were present at the battle of Ōrākau on which Rewi’s Last Stand is based) was an influential member. Cooper argues that Te Huia, who was previously only assumed to play the role of Rewi Maniapoto, was also involved behind the scenes as a key historical advisor and minor shareholder.

The book draws on a large number of interviews (some archival, others conducted by Cooper) with directors, writers, producers, cultural advisors, cast and crew members. In the chapter on The Governor, quotes from Don Selwyn, Keri Kaa, Tony Isaac, George Hēnare and Michael Noonan reveal the deep consideration of whakapapa and mana involved in casting roles such as Wiremu Tāmihana and Rewi Maniapoto. Similarly, interviews with Vincent Ward, Tainui Stephens, Leon Narbey, Waihoroi Shortland and Pou Temara offer various reflections of the historical processes and cross-cultural interactions involved in the production of Rain of the Children (2008). These interview are interwoven to represent film and television as collaborative ventures rather than a single auteur’s vision, and provide strong supporting evidence for Cooper’s textual analsyis.

While giving attention to individuals involved in production, Cooper does not downplay the influence of the industrial context. Filming the Colonial Past provides an in-depth history of the film and television industries in New Zealand, charting developments in technology, government policy, funding conditions and dynamics of international co-production. Cooper unpacks how the deregulation of broadcasting in 1989 required Greenstone’s producers to find multi-national investors, and why the BBC’s resulting influence complicated the original historical intentions for the show. By outlining the shifting (and often contradictory) intentions and circumstances that influence a final screen text rather than simply treating it as a ‘reflection’ of the filmmakers’ politics, Cooper provides nuanced coverage of the many forces that have influenced New Zealand Wars screen texts over the decades.

In addition to research on personnel and industry, the book situates case studies in relation to significant national events and dominant public discourses (particularly around race and national identity) at the time of their production. Cooper makes links between the second Rewi’s Last Stand’s nationalism and the 1940 centenary of the Treaty, the moral-ambiguity of The Killing of Kane and the Vietnam War, and the success of The New Zealand Wars and the country’s recent embrace of biculturalism. She is, however, cautious to avoid the tendency of some historical film writers to over-emphasise creative texts as revelations of the values and concerns of society at large.

Some readers may find Filming the Colonial Past’s critique of individual films and filmmakers too generous. Cooper’s approach is an optimistic one, looking to find the historical value in all her case-studies rather than condemn them. Strong criticisms of films or filmmakers tend to be posed as quotations from others: Cooper relays debates around whether Whanganui iwi benefitted from or were used by River Queen but does not develop the arguments herself. In other cases, criticism is deflected away from individual creatives onto the industry more broadly; Cooper recurrently frames her critique in relation to the screen industry’s prioritisation of profitable entertainment over public education. This absence of harsh individualised critique is, perhaps, unavoidable given the diplomacy necessary for such an interview-rich book. Favouring a theoretical approach that regards screen productions as complex networks with multiple influences that should to be evaluated according to the historical context of their creation, supports the book’s central premise: New Zealand Wars screen texts are products of cross-cultural collaboration.

Filming the Colonial Past is a vital addition to the growing literature on the New Zealand Wars. Given that throughout the twentieth century, the majority of New Zealanders gained their knowledge of the wars ‘through a screen story [rather] than by reading or hearing about them’, the history of New Zealand Wars film, television and (more recently) other audio-visual forms is integral to our understanding of how the wars have been remembered and mythologised over the past century. Cooper’s argument that New Zealand Wars productions, whilst influenced by colonial power structures, have also been sites of Māori agency, reveals the value in letting go of the limiting crutch that is auteurism in favour of a collaborative, contextualised understanding of production processes. Filming the Colonial Past provides deep contextual research and convincing textual readings of a comprehensive range of screen texts, useful for academics, educators, curators, screen funding bodies, filmmakers, fans and anyone wanting a better understanding of how the New Zealand Wars have been represented on screen.

CAITLIN LYNCH is a master’s student in film theory at Victoria University of Wellington. Her honours dissertation explored the representation of landscape in New Zealand Wars cinema, in relation to changes in land politics and national identity between 1940 and 2005. Caitlin’s current research investigates how the ‘mash-up’ film Terror Nullius (2018) appropriates the Australian popular media archive to intervene in contemporary politics.