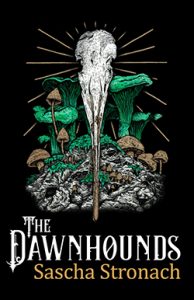 There is a history of speculative fiction exploring how humans engage with the environment, and it’s a theme that’s coming to the fore as the effects of climate change become ever more apparent. It’s a way of exploring consequence. What happens if we fail to limit carbon emissions? What happens if we let radioactive waste mutate organisms? There’s a subset of speculative fiction, however, that plays with something different entirely: what we are, as opposed to what we do. That subset is a frequent user of fungus. Jeff VanderMeer uses fungal noir in his Ambergris series, and Sascha Stronach has done the same in The Dawnhounds. In both, fungus is a strong element of setting, taking over cities and organisms, where the emphasis on fungal biology has led to significant alterations to the human body and how it is perceived.

This is only realistic. The humanist perception of a person as an individual figure, as a political entity deserving of individual rights, is just plain inaccurate on a biological level. Humans are not individuals. Rather, we are individual colonies of multiple species. The human microbiome, including bacteria, viruses and fungi, is not only necessary for the continuation of human life, but in many ways even outnumbers it. A comparison of cell numbers and genomes shows that, within what is thought of as ‘the human body’, the vast majority are actually nonhuman. This has led to radical reinterpretations of just what it means to be human in the first place.

Fungus, then, is a useful metaphor. It’s seen as a colony organism, something embedded in ecosystem. The human contaminated with fungus – or, in a more positive interpretation, having a symbiotic relationship with fungus – is therefore far more connected to the world around (and within) them. This connection can lead to a prioritising of ecology, and of community, over the individual, or it can have connotations of eco-horror as the individual is ‘taken over’ by biology. Unlike VanderMeer’s Ambergris books, The Dawnhounds leans more towards the positive, partly, it must be said, because biology has become something to be controlled, technologised, and exploited. Biopunk, the subgenre of science fiction that focuses on such aggressive use, is the natural successor to cyberpunk in its questioning of what it means to be human – although that questioning has moved from images of brains in vats and virtual realities to genetic engineering and identification with the microscopic.

That move, within the text, is seen as progressive. This is an inversion of the ‘science versus superstition’ dichotomy often set up in societies where magic is perceived as suspicious and threatening, and science as rational, reasonable and ultimately controllable. In Dawnhounds, the biochemical alchemy that underlines the botanical technology permeating the text is seen as distinctly non-magical. As Yat, the protagonist, initially thinks, ‘Magic didn’t exist in the world; magic belonged to the dead.’ Similarly, the use of metals is something associated with the past and with those left behind. ‘When she’d been a kid it was all dumbtech, all machines and steel: amazing how fast alchemic botanicals had come up. She could barely remember a world without the wonders of botany.’

And because so much of the world Stronach has created is based on the manipulation of living things, particularly of fungus, then the very architecture of the human body – and the city those bodies inhabit – is fundamentally reconstructed. Yat takes refuge in a deserted dwelling that is both mushroom and alive, a giant fungal structure that not only feeds off the presence of its inhabitants, but requires it. The house, she notes, ‘was probably dying. She collapsed, and the instant her back hit the floor she could feel the house coming to life – eager for sweat, and hair, and flakes of skin. Houses were remarkably efficient creatures, but they still needed to eat.’ This is an unashamedly symbiotic relationship, and it’s one that implicitly extends from Yat to the entire city of Hainak.

From the beginning of The Dawnhounds, Hainak is presented as a living entity – an ecosystem of disparate but connected creatures. That presentation is heavily weighted towards images of consumption. This isn’t a new concept. We’ve all read variations of individuals being chewed up and spat out by vast machine-like environments, but Hainak is not a place that has much truck with machines. Yat’s tea-filled steel flask is unusual enough to make her police superiors suspicious: ‘Steel wasn’t dangerous or anything, it was just, uh, political.’ Hainak, so organic itself, is far more interested in absorption than in some wheel-cog destruction. Yat’s father dies slowly as the city eats him ‘piece by piece’; her former lover disappears, as ‘one day the city ate her whole, and didn’t even have the courtesy to spit out her bones’. Hainak is alive, vital and interconnected.

This is also the case in Ambergris city in VanderMeer’s Finch, and I don’t think it’s a coincidence that the protagonists of both Finch and The Dawnhounds are both cops operating within an increasingly compromised and corrupted system. Good cops, white hats transformed into white cells, trying to provoke some form of latent immunity and expel that contaminating infection from their respective cities. In Finch the infection is purely fungal, the transforming botany nothing but threat; Dawnhounds distinguishes between welcome and unwelcome spores, a clarification that does nothing to disguise the positive impacts of ecosystem and botanical symbiosis. While the detectives in Finch are bringing gumshoe tradition into VanderMeer’s fungal noir, however, Dawnhounds is clearly and happily influenced by the City Watch of Terry Pratchett’s Discworld series. Ankh-Morpork, patrolled by the City Watch, is admittedly a dump of a city, albeit one brimming with all sorts of life and multiple sentient species (none of them fungal). But the few good cops of Dawnhounds, including Yat and her supervisor Sen, are as devoted to Hainak as the City Watch is to Ankh-Morpork.

The tones of Stronach and Pratchett are enormously similar. This is something that I find delightful – Pratchett is one of my favourite authors, and the bone-deep humanity embedded within the Discworld stories, which values every member of the community no matter what their social or economic status, is something Stronach is obviously invested in emulating.

It is an emulation that Hainak deeply requires. Prejudiced in many of the unfortunate ways – Yat herself has been demoted due to her bisexuality – the undesirables of the city are transformed into blanks: perfectly malleable servants with all personality stripped from them. In this they are reminiscent of the Partials of Ambergris, who, as their name suggests, are partially taken over by fungus. But whereas the Partials are being drawn further into the threatening fungal community that their biology represents, the blanks of Hainak are severed from community, losing all emotions, memories and personal ties. They are walking biological metaphors for the concept of ‘human’ that revolves around the individual, rather than the ecosystem, entirely separate from the world both within and without.

Yat’s demotion, then, could have been worse. Her bisexuality is what saves her – the fact that she likes men as well as women marks her as somehow redeemable within the restricted confines of her culture. That’s a compromise that, unsurprisingly, she finds very hard to live with … and it’s another example of the compromises she realises she has been making when it comes to the blanks. They’re accepted within Hainak as a suitable end for criminals and subversives, but as Yat herself comes to understand, there are more blanks than such classifications indicate there should be. It becomes ever clearer that, in her role as cop, she has been helping the process along.

The narrative ends wisely, I think: it doesn’t flinch from the exploration of this. Yat’s intentions might be good, but her thoughtlessness and ignorance have enormous repercussions. Sibbi, a pirate who acts as a reluctant ally to Yat through most of the book, makes this very plain. ‘When was that ever an excuse?’ she snaps. ‘Ignorance doesn’t raise the dead.’

There is a responsibility, says Sibbi (says Stronach), to be aware of actions and consequence, to not look away. There is a responsibility to answer to the rest of the community, all of it, for actions that affect other people in an interconnected ecology. There’s something attractive in that, something very much reminiscent of Pratchett, and I can only hope that, as with Ankh-Morpork, there are more stories about Hainak to come.

OCTAVIA CADE is a NZ speculative fiction writer. She has sold close to 50 short stories to markets such as Asimov’s, Clarkesworld and Strange Horizons, as well as a handful of longer works to various small presses. She attended Clarion West 2016, has won three Sir Julius Vogel awards, and is the 2020 writer-in-residence at Massey University – the first time the position has gone to a speculative writer! She can be found on Twitter at @OJCade