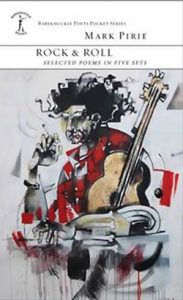 Rock & Roll is the kind of book that feels a lot more at home in your back pocket on the way to a gig than it would in a lecture hall or a hugged pile of academic papers: pocket-sized, although it packs a lot in. Mark Pirie chose this selection of almost ninety poems, whittled from a choice of around 2000, and has themed them into five sections: music, film, love, sport, and Australia – the latter in a nod to the location of his Australian-based publishers, who say the poems‘favour the cutting edge over the blunt of the handle, the avant-garde over backward walking, the delinquent genius over genre’. Pirie’s mission was ‘to make the book like five different rock and roll concert sets, and to choose the themes that have made me more unique as a poet, poems that readers would say are distinctly Mark Pirie poems in his own voice’.

Leaving aside the obvious pedantic point that unique is not comparative, there is, nonetheless, a definitive style and tone that links the poems in the collection. Pirie has a penchant for couplets and five-liners, and an air of do-I-look-like-I-give-a-fuck-about-your-pedantic-meaning? The longer poems retain the snapshot feel, the surface cool.

at Jon and Richie,

‘Wouldn’t it be nice

At the end, they

head off into the night,

living on a prayer.

The filmic section ‘Special FX’ is up next. A telling script, lists of scribbled scenes. ‘10 filmograms’, mirroring ‘10 popigrams’ in the first section, is curiously anodyne:

She gives to men Eros’s highs.

And women. The Holy Trinity.

James Bond has a licence to kill.

Sex and violence, for him the thrill.

The next section, ‘Good Luck Bar’, purports to be about love. But it’s the Hemingway/Bukowski/arsehole-in-the-bar approach to women that gets an airing here. It’s somewhat self-conscious, like these lines from the start of ‘Full’:

this woman is no longer

an object to me

she is just very pissed

‘Sonnet, then, for love’ describes a woman who ‘lies in bed / showing off her wounds’, so Pirie tells her about a mangled dead cat on the asphalt, ‘and sure enough / it shuts her up’. It’s almost edgy. It’s almost funny. It’s almost.

Over the years, Pirie has had poems placed as conversational/commemorative pieces in the world of sportsing, and some of these are showcased in the ‘Sidelights’ section. Usain Bolt, Dan Carter, that Bradman guy and a shit tonne of other ball hitters and kickers get the Pirie everyman treatment. In voice, in print, Pirie himself is ever-present in and around the poems, adding notes and interjections in a continuation of his conversational style. At the end of ‘Jonah Lomu’, Pirie footnotes: ‘Jonah died suddenly a year after this poem was written. An All Blacks historian (who knew me) had sent this poem to him.’

The last section, ostensibly ‘Australian, Postcards’, is a mix-tape in itself. Of movies, of memories, of moments, of music: Pirie, front and centre of it all. 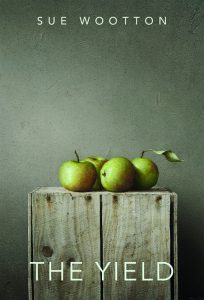 Sue Wootton’s The Yield is wider than most collections – physically, to accommodate long line-lengths, and also perhaps in scope. The cover holds a clue for approaching the poems: unstickered apples on a wooden box. Each to evaluate, hold. There are fifty-eight poems in this, her fifth collection. A bit of sleuthing in the Acknowledgements shows that they go back as far as 2011. Some have won prizes and accolades and, not just because they’re uncategorised, there’s a sense that this collection is a group of individuals. The range makes it tricky to tease out themes because once you’ve identified one facet, there’s another. The poems are not linear, which is to say they go places, but the places they go are inside of themselves. They are prisms. Prisms of place, prisms of worship, of wonder, of family, of oddities of language, of dead friends remembered, of – among other things – life, the universe and moonbathing.

Scenes are given descriptive specificity, not just in their naming, but in a moment of being. In ‘Graveyard poem’: ‘all the children with their terrifying ages engraved stark against bewilderment’; in ‘Snow flurry on York Place’: ‘They make the sign / of open-fingered catching’. There is a deftness with the actualness of things; of course there is a cloud that is ‘mammatus’, of course, such a thing as a ‘smeuse’.

You’d be forgiven for thinking that a collection commencing with ‘Wild’ and ending in ‘The yield’, via descriptive tours to other galaxies, is so much lyrical poem fodder. But there’s a bitter steel humour in place, as with the sonnet ‘Forgiveness’ or in ‘Miser’:

If he ever wakes in the small hours

he hears it: clink, clink. It never occurs

to him that it’s his heart –

And so he lies and counts.

I count, he thinks, I count.

Often, the density of the language necessitates careful reading. Sometimes the sounds chase the meaning and run away:

… Drop by drop she picks the crop – she

and She: Someone She, millennia-gone …

Animals inhabit them until they inhibit

the animals, inhabit the uniform, achieve

‘Abandoned stable, Matanaka’ is another example of the persistent rhythm that begs some of these poems to be read aloud. It’s as if the words inhabit both sound and meaning; which is poetry, isn’t it? 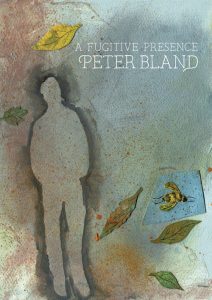 Poetry, after all, can be found in all things. A centaur or a unicorn seem equally as tangible as a homeless man asking for money for a Big Mac in Peter Bland’s new collection, A Fugitive Presence. He’s not so much writing metaphysical as meta-physical, keeping himself open, as in ‘Half-closed doors’:

I keep getting glimpses

They come from somewhere

I couldn’t make up

getting glimpses of me.

Souls and angels and ships in the night all get an outing, and though these tropes can be the very stuff of cliché, they’re not so here. Perhaps it’s a careful simplicity; free-form poems that sing their way through before anchoring.

Much is made of the watery elements, seas, seasides, boats, tears:

harbour moored in their hearts.

And, throughout, the tone is a sort of searching:

in the unknown depths

of every tear we

(from ‘A fugitive presence’)

There is a searching, perhaps, for surety, finding the sacred in all things, as in ‘Bread, water, wine’: ‘They’re the staff / of life, the stream in the desert, the / cup that runneth over.’

A small quibble with the life-metaphor poems in this collection is Bland’s use of the empirical/universal first person plural – as in ‘Harbours’: ‘Whenever we dream of harbours they’re waiting / for us to arrive’. Indeed, this use of ‘we’ is lauded as his approach in the cover blurb. It comes across as universal, and yet when others of us dream of harbours they may have a khaleesi sailing into them, a row of blue boats upturned, or the smell of dank anchovies. Still, Bland’s harbours are easy to access: they are lyrical, nostalgic, imbued with sadness.

There are gritty poems here as well, though. ‘The bordello’ is one such, and in ‘The philosopher’ Bland pokes a good bit of healthy fun at the whole metaphysical malarkey:

‘Infinity is in the scent of a flower.

Didn’t Blake say that?’ Not quite, I replied, but

immeasurably other but I need the bus fare

… He pulled me closer. His breath was a

sewer. ‘It’s vital to feed the soul,’ he whispered,

There are poems about making poems, specifically ‘This poem starts right now …’ and ‘Blackberrying’. The latter is an example, again, of Bland’s simple exactitude:

a long time I try

to lick off the stain

above your left breast. Yes,

this is the poem

the joy of feeding you

ripe fruit, and the blackberry

taste of that stained dress.

In the end, and in the endings, Bland has a notable way of nailing last lines. ‘On acquiring an Old Testament tone’ sees ‘so many crazed Samuels / googling God?’ And how’s this, from ‘Evensong’:

here at the close of each day

LIZ BRESLIN lives in Hawea Flat and writes poems, plays and stories as well as a fortnightly column for the Otago Daily Times. Her first collection of poems, Alzheimer’s and a Spoon, has just been published by Otago University Press.