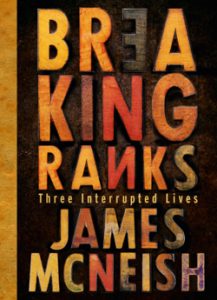 When James McNeish passed away last year he left behind a significant body of prose, specialising in historical novels and (in the modern parlance) ‘creative non-fiction’. In practice, his books are impossible to categorise, which is entirely part of their charm. His persistent theme was the salvage and apotheosis of the romantic, larger-than-life individual directly or indirectly shaping the course of world around him (and it was usually a ‘him’), preferably doomed or otherwise frustrated in their potential.

The form and feel will be familiar from McNeish’s 2003 book The Dance of the Peacocks, ultimately owing much to Sebastian Faulks’ 1996 The Fatal Englishman and the likes of Lytton Strachey’s Eminent Victorians (1918) and G.K. Chesterton’s literary biographies: that is to say, they owe as much to whimsy as they do to cold fact.

Though a passionate and principled man, McNeish’s objectivity wavers. He was more than capable of rigorous detachment, as in Fire Under the Ashes (1965), his biography of Sicilian poet and anti-Mafia crusader Danilo Dolci. Not so much his 2007 The Sixth Man, which is, perhaps, too obsessed with proving Paddy Costello innocent of the charge of spying for the Soviets (the jury remains out).

The posthumously published Breaking Ranks: Three interrupted lives indulges in all of these quirks in spades. That said, it’s eminently readable: ‘sketches’ of ‘three men, who defied authority and paid for it’. McNeish brings together a troika of fascinating personalities for celebration, not undeservingly, claimed as examples of instinctive anarchic subversiveness that the late author intuited (or at least, imagined) in the national character. The title alludes to this as well as the military careers of all three men. He writes:

New Zealand is a country that has grave doubts about where it belongs in the world; consequently it has difficulty in defining its national character or psyche. One of the elements that helps define us, I believe, is a hidden outlaw that leads us on occasion to question authority and poke our head above the parapet. Call it dissent, subversion. Or anarchy.

Or call it tosh to justify bringing the subjects together between the covers even as McNeish denies they have much in common at all. Compared to whom, exactly? Norway, perhaps? Or Brazil? Which country is the golden standard? From Bill Pearson’s 1952 ‘Fretful Sleepers’ essay, to Sam Neill’s 1995 documentary Cinema of Unease, it is a persistent conceit and probably no more than boring, old, garden-variety, provincial cultural cringe in drag.

The first of these individuals is Dr John Saxby, an English psychotherapist and personal friend of McNeish. McNeish as narrator inserts himself rather a lot into the story, more so than with his other two subjects, whom he didn’t know, and it tends to become distracting when he peers over the fourth wall every third paragraph. The two other entries read much better for some distance.

Saxby, an Oxford graduate and a paratrooper medic during the war, arrived in New Zealand in the 1960s and took up a position at the Tokanui psychiatric hospital, where he introduced such radical concepts for the time as group therapy and psychodrama, becoming hospital superintendent in the 1980s.

Saxby is sketched as a humanist and likable eccentric with an intuitive knack for diagnosis and an aversion to unnecessary psychopharmacology, an amateur architect who translated Rilke in his spare time. Particularly touching is the illustrative passage of Saxby helping a suicidal and possibly schizophrenic student, who later blossoms. At the same time, Saxby seems inordinately obsessed with placing himself in danger’s way, climbing mountains, over-exerting himself, being very visible in the 1981 Springbok Tour protests (fantasising about suicide-bombing the tour bus or assassinating Muldoon) and eventually dying by his own hand in 1993, apparently driven to breaking point by what the 1980s neoliberal reforms did to Tokanui.

Next is Brigadier Reginald Miles, a New Zealand artillery officer in the Second World War. He is painted as a John Mulgan type (it will be recalled that Mulgan was one of the subjects of Dance of the Peacocks), the gentleman soldier, bullied as a child, an early graduate of Australia’s Duntroon military academy. Apparently he was regarded as the logical successor to Freyberg in North Africa, but disobeyed his superiors and joined the ranks as the Germans overran the Allied artillery. He was captured, escaped from an Italian POW camp to Switzerland, and then for some completely inexplicable reason crossed occupied France with the help of the Resistance, only to commit suicide in the north of neutral Spain.

Miles seems only truly one-hundred-per-cent functional in wartime. Certainly, interbellum, the British military regarded him as a potential liability:

In England he sounds a bit wild. ‘What is to be done with Miles?’ reads one report. ‘Is he to be sent back to his own country?’ The answer was a resounding ‘yes’. He seems to have shone in everything but ‘tact’. Sensitive to slights, he doesn’t take kindly to being put upon. In other ways, like logistics, he is obviously something of a wizard, and back in New Zealand on the eve of the Second World War, he is far and away the best artillery man for the top job.

McNeish wheels out the leather couch: ‘Miles had, I believe, a genuine wish for death’. Miles’ fellow POW and escapee James Hargest thought he was depressed. Miles’ wife suggested he was haunted by guilt over something he might have given away under interrogation in Spain, though there is no evidence that he did. McNeish speculates, but just possibly the war, as Hargest believed, as with so many, had finally worn him down.

McNeish’s third subject is Hon. Justice Peter Mahon, whose story is perhaps sufficiently well known as to make one question whether it needed another retelling. Mahon oversaw the commission of enquiry into Air New Zealand’s 1979 Erebus disaster with its 257 dead, and was ostracised by his professional peers for going against the narrative of pilot error that the government (the main shareholder in Air New Zealand) preferred. Mahon, to the envy of writers throughout the country, coined that immortal phrase ‘an orchestrated litany of lies’.

Air New Zealand took Mahon’s report to the Privy Council, who, having the backs of the establishment, overturned it. Mahon resigned. Inconveniently for McNeish’s symmetry, he didn’t kill himself, though McNeish intimates rather heavily that the strain events put on his health was responsible for his death. This is plausible, given how appallingly Mahon was treated following the ignominious fall from grace. The elite eat their wounded.

These are riveting stories, though they do get bogged down in McNeish’s tangential diversions. Do we really need yet another rehash of Janet Frame’s close call with the scalpel to set the scene of New Zealand mental health at the time, despite that being fifteen years earlier? So frequent and heavy-handed is the padding that it comes as a palpable shock when McNeish writes of Miles and Freyberg at Thermopylae, and doesn’t dig up and parade the corpses of Leonidas and his 299 Spartans for colour. Really, what is one to do when faced with such Barbara Cartland-esque flannel as the following?

John had Indian blood. It was a part of the wild animal side that was deep within him: a mysterious connection that led him on occasion to cast off restraint and expose himself to unnecessary and often extreme hardship, coupled with a complete absence of any instinct for self-preservation – as with fighter pilots.

McNeish’s description of Mahon’s judgement delivery, ‘a mix of charm, vanity, and love of language’, aptly fits his own prose, but perhaps that’s as compelling a reason as any to devour the book. McNeish deploys language with passion, polish and skill, so that it’s impossible to be put off for long by some of the rhetorical theatrics and hagiography. He is a writer’s writer, but entirely accessible and entertaining for all that.

As a final note, I do complain about bad New Zealand book design rather a lot, but the cover of Breaking Ranks is pretty ghastly. The curious way the cover title is broken up is visually confusing (Brea King Ranks, as if, in fact, the book were about the army of a monarch of Californian tar pits), and the visual pun of reversing an E and an N (they’re breaking ranks, geddit?) serve no purpose other than to distract. It doesn’t sell the book on the shelf to my eye, but then I’m aesthetically fussy.

On the whole, Breaking Ranks is a pleasure to read, especially if you enjoy New Zealand history, but don’t make the mistake of thinking it a straight history book.

ANDREW PAUL WOOD is an independent cultural historian, curator, consultant and critic. His most recent book was a translated collection of the poetry of the German-Jewish refugee poet Karl Wolfskehl, and he is currently working on a book on Fiona Pardington’s ‘Still Life’ work. He holds a PhD from the University of Canterbury.