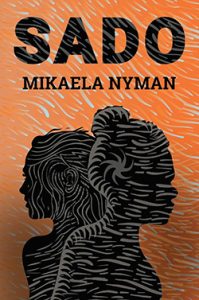 When I saw the title of this novel, my mind conjured expectations of de Sade and Pasolini. But a glance at the novel’s front flap (mostly) disabused me of this expectation: sado, a dictionary extract reveals, is a Bislama word meaning ‘shadow’, ‘reflection’, or ‘humiliation, dishonour’. That turns out to be an apposite title for Mikaela Nyman’s novel, which is set in both the aftermath of Tropical Cyclone Pam and the umbra of colonialism, male violence, kastom (custom) and notions of belonging.

One might also argue that much of the novel exists in the shadow of the horrific accident that takes place about two-thirds of the way in – an event that reifies the story’s thematic concerns and precipitates an implicit investigation of the title.

But let’s begin at the beginning. Sado opens with a poetically tense description of New Zealander Cathryn waking to the devastation wreaked by Cyclone Pam on Vanuatu. Her roofless house is flooded and ‘flying on one wing’. She’s heard nought from her boyfriend on Pentecost Island and nothing from the Ni-Vanuatu haosgel (house girl) Reimon, who had returned to her village to ride out the storm. And while Cathryn’s books have been pulped by the deluge, at least her teenage son, Tarn, appears to be unhurt.

The prose strains hard at first, occasionally to its detriment, yet at other times the writing is exquisite:

Cathryn and Tarn shuffle towards the edge of the cliff where the fence used to be, but there’s no trace of either poles or mesh – only a colourful salad of croton leaves at the bottom of the scarp, along with a few cubic metres of dirt and coral rubble. Every tree within sight has been stripped of its leaves. The rolling hills on the other side of the lagoon are shorn from shore to horizon, revealing roads and houses, wrecked concrete walls and rusty vehicle carcasses previously hidden under a dense canopy.

Once the ‘destructive eye-wall’ of Pam recedes into history, the novel charts a path through the post-disaster relief and reconstruction effort. The villages of Vanuatu need essentials like food, drinking-water, medicine and building supplies – and the main character’s job at the NGO ‘Vision2030’ places her in the midst of this effort.

Cathryn empathises. She strives to help, charitably and as part of her job. She encounters intriguing culture. Her role is primarily observational in clashes with management, government officials and village chiefs – such as when her Ni-Vanuatu colleague Faia is scolded for wearing shorts to a meeting about drinking-water. Cathryn also has personal dramas, including friction with her judgemental mother, troubles with Tarn’s heart, and emotional turmoil when her boyfriend survives the cyclone only to see her at exactly the wrong moment with another man.

Before the accident occurs, though, the novel evinces an anthropological or sociological intention that at times collides with its fictive ambitions. This produces, for example, a nebulous main character, an episodic narrative, and a writing style that fluctuates between the enterprisingly poetic and blandly journalistic:

There’s the state and there’s the emergency. The solemn declaration by the prime minister that the country is in an official state of emergency is promptly followed by a night curfew. If the former is a nuisance, the latter is perceived as an insult. Even though the curfew is explicitly invoked for the safety of all citizens, it shifts the mindset from one of helping one another to one of distrust, mixed with fear.

That is not to say that there aren’t several pleasures to be found in the novel pre-accident. The juxtaposition of Cathryn and Faia emerges as the most notable of these. Cultural expectations to which Cathryn is not subject are placed upon Faia. The latter bravely rebels against patriarchal norms and speaks out about women’s rights, especially with regard to male violence. Heartbreakingly, Faia tells Cathryn about escaping her cruel, violent former partner; Cathryn confides that she is ‘still running away’ from her abusive ex. On her radio show, Faia argues: ‘Stret. I think we should stop using “domestic” and call it by its real name – violence. And violence is never okay.’

What’s more, the episodes of the early narrative establish complicated and important questions. Cathryn hires an impecunious father of eight to carve her a tamtam (slit drum) – but whether she’s motivated by charity, exploiting the Ambrym carver or being swindled is just a little difficult to gauge. She attends the exhibition of a French printmaker who has her work inspected by Ni-Vanuatu chiefs; apparently, they’ve determined that an image of a tamtam is not cultural appropriation, but a carving would be.

On a perhaps related note, engaging points of view – including Ni-Vanuatu perspectives – enter proceedings in the guise of fictional first-person interview transcripts, some of which are recorded partly in Bislama. One of these gives a strong voice to Reimon, whose village is later evicted by a corporation; another reveals a Ni-Vanuatu driver, fired from Vision2030, railing in sexist language against Cathryn and foreshadowing a terrible accident.

Undoubtedly, this accident could have occurred earlier in the text. But when it happens, the novel reconciles its academic intentions with its fictive ambitions and seriously finds its feet. The plot takes off in interesting directions, the prose becomes smoother and even the form grows more inventive. Moreover, the accident subtly exposes the contradictions within the main character – her wafts of colonial attitude, unwitting paternalism and delicate positioning within the cultural landscape of Vanuatu. It allows for a superb interrogation of the second-order effects of male violence, patriarchy and kastom. The circumstances of the accident – the details of which I will not spoil – are significant, and I read the section multiple times. Cathryn, distressed by the looming possibility of male violence, presumes Faia will take on a task that Cathryn has until now been performing. She doesn’t pause to consider whether Faia is as distressed as she, and redoubles her reflexive lack of empathy with a minor dereliction of duty that contributes to the accident.

In its wake, the notion of Cathryn and Faia as sados of each other becomes more explicit. Faia is forced to make onerous reparation to the victims of the accident, in accordance with a patriarchal kastom that she criticises as not her own. The complexity of this kastom is thoroughly examined, with more fictional first-person perspectives – chiefs, judges, NGO representatives and, belatedly, Faia – brought into the narrative. Cathryn struggles with the guilt of being exempt and the pain of being an outsider; simultaneously, she experiences the privilege of her position. When she beats herself up about it, a Ni-Vanuatu co-worker tells her, ‘You’ll have to wait for the trial. That’s when you’ll face your justice.’

But will she? And what measure of justice does she even deserve?

The relationship between Cathryn and Faia becomes distant, and there’s an excellent scene involving the two that is repeated with its subtext – included in square brackets – raised to the level of text. The scene makes manifest Cathryn’s failure to address her conduct, even though it acknowledges the interpersonal failure and leaves its myriad political implications for the reader to intuit.

Where the play perhaps lets the main character off the hook, readers might ponder whether they should entirely do likewise. Afterwards, Cathryn listens to two female petrol station attendants discussing the play and gossiping about the ‘real’ accident. Their dialogue is formatted like a stage or radio play. And with her car filled up, Cathryn advises the pregnant attendant, ‘You know, you really shouldn’t work at a petrol station in your condition. It’s not good for the baby.’

It’s also worth remarking upon her interactions with another sado, Bree – a ‘limbo lady’ caught between her distant past in New Zealand and her longstanding present in Vanuatu. Deep into the novel, Cathryn asks Bree whether she ever longs ‘to go back home’. ‘Taken aback’, Bree replies that Vanuatu is the home that claimed her. A final revelation towards the end emphasises that this is a novel about the thorny nature of belonging as much as anything else. As Bree remarks at one point:

Once I’d finished the novel, I began considering it in the context of Disgrace, J.M. Coetzee’s unflinching examination of post-apartheid South Africa; after all, one of the meanings of sado is ‘humiliation, dishonour’. The novel Sado, though, is less willing to apportion blame for the horrors that take place: devastation is wrought by a natural disaster and a shocking accident. In many ways, it’s a subtler work of fiction that is kinder to its characters – and it ends up operating as an intricate love letter to Vanuatu, one that celebrates culture, problematises aspects of kastom and strongly advocates for women’s rights.

ZAHID GAMIELDIEN is an author, screenwriter, editor and writing tutor. His fiction has appeared in various literary publications, including Platypus Press’s shorts series, Meanjin, Overland, Kill Your Darlings and The Bath Flash Fiction Anthology. His co-written screenplays have also been shortlisted for awards such as the AMC One-Hour Drama Pilot Award and the Australian Writers’ Guild’s John Hinde Award. He’s currently working on a novel. You can find him at zahidgamieldien.com