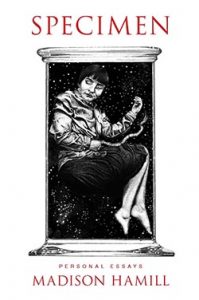 Stepping into the world of Madison Hamill is a bit like stepping into the crazy life of Patricia Lockwood; Specimen might be considered our homegrown Priestdaddy. Key similarities: this collection of essays boasts an eccentric ministerial father, along with plenty of foibles and faux pas (both the author’s own, and those of a whole host of bizarre dramatis personae)—and it’s downright hilarious. So far, so brilliantly similar. Except—and I’m tiptoeing un-daintily around a massive spoiler, here—for the sex. A counterpart to Lockwood’s heterosexual relationship is nowhere to be seen. This is because Hamill reveals herself, in the aptly titled ‘I Will Never Hit on You’, as asexual.

Specimen is revelatory, maverick and nostalgia-piquing. It’s also a first book. Straight out of the gate, Hamill gives us non-fiction flecked with mad, rewarding moments of magical realism and hyperreality. As Hamill acknowledges in the Author’s Note: ‘Some of it is not true, such as the bit about the woman walking around with an axe in her head … I made that up because sometimes telling the truth requires lying.’ Read: she makes shit up, but only to tell it like it is. Isn’t this the essence of poetic licence, crisply defined? But it’s not just about creatively telling tales. This is nonfiction, after all, and any essay collection worth its salt should have a select bibliography this good, this wildly varied, charting Hamill’s topics from asexuality to avian behavioural psychology through to rural ethnography.

The opening essay, ‘The New Leadership’, is a cringe-fest about the dictatorial powers of teachers on young minds. Decades after primary school, Hamill dispels the myth of the ‘fun guy’ teacher, unmasking Mr Woods as a master manipulator, the cruel Tony Robbins of primary school. To instil leader-mania in his students, Woods introduced a panoply of responsibility-bearing acronyms and hierarchical reward programmes for eager leaders, keen to emulate the sainted figures of Mandela, Churchill, MLK, etc. (It’s a shame about the misspelling of Gandhi’s name on the first page, but the book is worth a reprint, so hopefully VUP will pick up on that typo for round two.) Hamill recalls her classmates ‘want[ing] those badges as if they would make us famous and make our parents love us’. All of them were desperate to earn their silver and gold badges, along with presumed membership in some precocious leaders’ hall of fame. But they were also spurred by fear, for Woods used public shaming and diminution of self-worth to control his young charges. This essay brilliantly depicts the child’s mind and the sense of being physically weighed down by leadership values and their tangible signifiers: ‘The badges clinked together when we walked, dragging our shirts down, the metal pins like scales against our chests.’

Hamill also recounts Woods’ inverted version of Hitler Youth-style home surveillance, which could be something out of Orwell or J.G. Ballard. Growing increasingly invasive, Woods urged parents to monitor students with leadership potential and to report on their behaviour at home. He comes across as a ludicrous, grasping Hitler figure, pulled straight out of Jojo Rabbit. This essay congeals into a series of memories about a teacher imposing Manichean divides onto kids craving acceptance. It is skilfully, ickily done. The students completely absorbed his binaries: Good vs. Bad, Leader vs. Good-for-Nothing, ad nauseam. Hamill narrates being caught in the values trap: ‘I hated Mr Woods, but I still believed in the values of the leadership system … Any dream of resistance centred on showing Mr Woods that I embodied these values.’ When Hamill breaks free of the values trap and hands in her prefect badges, the essay ends on an epic blend of nursery rhyme and power ballad: ‘I felt the way a pigeon might feel if it were to claw its way out of a medieval pie before its cue. I felt powerful.’ This oscillation between emotional highs and lows is a recurring, potent rhythm.

Again and again, these binaries reappear. There’s a riotous modern Manicheanism throughout these essays. Hamill plays with hard binaries in many contexts, with both the levity of hindsight and the gravity of youth: ‘Morality weighed greatly on my mind when I was eleven. In my diary I cut out pictures of celebrities from Crème magazine and glued them into the categories “good” and “evil”.’ She also considers a hierarchy of crime (Good/Bad/Ugly/Insane?) in ‘Iceland’, about her prosecutions for shoplifting. However, human and thus deeply unsettled, Hamill also relentlessly resists clear categories and pigeonholes: ‘I liked to be a contradiction. It meant nobody could be certain in their assessment of me, and why should I let anyone be certain about me when I wasn’t certain about myself?’ She recounts bucking against binaries while registering them everywhere. Pushing back against the Good/Bad divide with regard to her own petty crime, Hamill self-diagnoses with alexithymia (co-morbid with Autism Spectrum Disorder) and Asperger’s, and carefully tries to psychoanalyse and rationalise her spate of kleptomania. There’s a real desire for categorisation here. Hamill craves a reason for her shoplifting. But then that puzzle—the self—turns out to be irreducible to a diagnosis or label. Eventually, rejecting simple categories, she comes to think of herself not as ‘a linear cause-and-effect puzzle’ but ‘a heart, two lungs, a long spool of fear, a tangle of experiences and a bottle of something brand new and imperishable that I had taken from the world and couldn’t give back’. It’s a rewarding shift in self-perception.

I’ve spent a while parsing these essays in detail, because they’re just so good. But other highlights abound. In ‘Ethnography of a Ranfurly Man’, Hamill brings together mansplaining of the world economy, actual ethnography and dialogue, with a broad emotional compass. She captures busking in New Zealand malls at Christmas time in the early 2000s, the holier-than-thou joy of summarising foreign politics to your parents ‘learned mainly from late-night comedy shows’, and dissects the meaning of Beyoncé lyrics with regard to the American dream. There’s a confusing—but reassuringly confusing—epistemology (‘I was certain I did know some things, only that those things didn’t add up to a knowledge of the whole nature of anything’) and an examination of the delights of the school canteen (sucking on the cutty plastic of iced Juicies!). Hamill also muscles her way through the physicality and mental release of aerial silks as well as the shifting cultural sands of asexuality: the other one percent (or, in New Zealand, the self-reporting 0.2 percent). And then she incisively narrates moments of encounter: how people respond when you say you’re from New Zealand (‘“Oh really?” he said, as if I’d told him the whiskey was aged in Cuban mahogany’) and how she responded to losing her virginity, with a classic rhetorical flourish: ‘I thought maybe it was the way a Victorian lady would feel when she held hands without gloves on for the first time.’ This is by no means an exhaustive hit-list. Hamill also writes about the sea with as much stark, melancholic romance as did Melville about whales. In short, it’s devastatingly good writing.

In ‘Speculative Fiction’, Hamill grippingly reflects on her time in South Africa (although occasionally oversteps into exoticised magic realism) and her own gaps in knowledge: ‘I had never considered the idea that economic apartheid did not stop when legal apartheid did.’ What candour, to admit your unknown unknowns, to even attempt to catalogue the endless list of things you don’t know when you only know a place from snatches glimpsed ‘while driving past … on the motorway’. Thus, instead of a twee, semi-autobiographical Bildungsroman set in Khayelitsha, we get an essay raw with honest appraisal of the limits of her own knowledge and experience.

Unlike the unnerving cover art, these are not memories packed in formaldehyde. They pulse with life and sensory experiences when you open the jar. Hamill has enormous control over tempo, language and the pulse of her storytelling. Crescendo moments are narrated with perfection, and she’s perceptive about dialogue. Riffing on the man-pleasing design of women’s lingerie, her friend’s boyfriend retorts: ‘“It’s the system that’s sexist, Maddy. I’m just one dick wanting what a dick wants.”’ And, unruffled, on she dances. In her deft retelling of family feuds and philosophical rebellion, Hamill can swear, storm off and sulk, then pirouette straight into a tangent on mountaineering, missionizing or religious truth. This is balletic writing. Hamill is in complete control. Her essays close with crisp endings, without feeling truncated—except for the example of the essay ‘Rules’, which ends with an ultra-long explosion of words, an (imagined) mic drop moment.

Specimen is marked by Hamill’s dry humour and enviable one-liners (‘Coolness, it seemed to me, was really an elite kind of ordinariness, like bottled water’), but also by extended analyses: of herself, her flaws, society, society’s flaws—anything. Sometimes the segues feel like comic joinery: the tenuous threads linking separate bits in a stand-up routine. But then there’s a twist and about-turn, and you see the thread of connection has been there all along. There’s something of Ariadne in Hamill’s writing, but also the Delphic: a confident, if semi-mystical storyteller delicately laying threads to follow through a maze of her own construction.

EMMA GATTEY is a writer and critic from Ōtautahi. She is doing a PhD in history at the University of Cambridge.