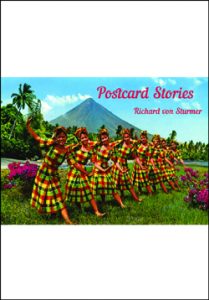 Postcards (eighty-three of them to be exact) are the means von Sturmer uses in his latest book to generate haiku-like poems with fragmentary narratives as their guiding principle. These postcards though are not of the conventional ‘Skytower’ or ‘Downtown’ variety, the kind we send to friends overseas bearing an immediately recognisable landmark of the locality they have left behind. Von Sturmer admits to an ‘eccentric and subversive’ interest in the genre whereby a postcard is appreciated for its own ‘oddness’; he doesn’t flinch from gaudy runs of colour or biliously roseate sunsets, and favours features such as tombs, canyons, or forest paths that induce ‘a small reverie’ – the baths at Pompeii then rather than the Grand Canal in Venice.

The art in this collection is basically one of juxtaposition, a familiar strategy in von Sturmer’s work. Two Tahitian women (mother and daughter?), snapped nipple-deep in a pool of water lilies, are captioned with four lines that reroute the picturesque into a nightmare of entropy and etiolation.

The misfortune of immortals

is that paradise fades away.

Even now the green is not so green,

the pink not so pink.

Many of these mini-poems would be evocative enough to stand on their own:

From dusk to dawn

And indeed the image that confronts us does resemble a set of entrances to underground tombs. But we are a little disoriented to discover that the photograph was taken near Hinemoa’s steps at Okere Falls, Rotorua!

Postcard Stories comes in two parts, the first consisting of sixteen sets of four cards each, each card captioned by a poem; the second consisting of just seventeen cards, each with a facing ‘prose commentary’ as the author calls it, though his imagination, wit and penchant for subverting our expectations are in striking evidence here too. In each set of four cards in Part One, the fourth card receives an extra fifth line. Those familiar with von Sturmer’s earlier work will recognise this arithmetical constraint as a typical discipline he imposes upon himself to give his creativity shape and order. The extra line in each final poem is there to complete the tiny narrative each set embodies. Don Quixote appears in one set, a statue comes to life in another, alien invaders decide planet Earth is just not worth the risk, an aspiring writer is offered a desk:

But the weight of the words

the scratches in the wood –

all reminded her of a childhood

she wanted to forget.

Interviewed by Scott Hamilton for the long-lost literary magazine SALT, von Sturmer referred to ‘a sort of dark soulful strand that goes through NZ creativity’. It certainly passes through his own work, beginning with the zany but occasionally morbid We Xerox Your Zebras (1988). The verse I have already quoted captures some of this characteristic strain of his. Part Two, in which the poet gives a freer rein to his reverie, contains some noteworthy examples of his dark matter. In the Wieliczka Salt Mine, ‘all the vanities of the world are slowly being dissolved’; in the flush of a ruddy (or is it ruddled?) sunset at Alassio, Italy, an Elgar stands on the balcony of his hotel listening to the wind rustling the fronds of the palm trees, a susurration that communicates the hint of a ‘great suffering to come as the century unfolds’.

Many of the visions though are not quite as melancholy or catastrophic, but concentrate on lives defeated by the frustration of their own reveries: the office worker in rain-soaked Manchester who dreams of Araby gazing at the photo of a young Moroccan woman lounging on a divan; or the lovers who in Preston Park (Brighton, UK) circumambulate the clocktower clockwise from spring in the east to winter in the north: had they turned another corner, they would have found themselves ‘reborn’ in their second spring. The latter seems to me an exemplary illustration of the intricate and idiosyncratic nature of this writer’s imagination, his genius for finding, in what many of us would regard as a rather bland piece of tourist promotion, a hint of that tragi-comic vein he mines so richly in all his writing. 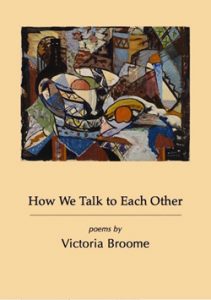 A first book of poems by Victoria Broome, How We Talk to Each Other, is often about how we don’t talk to each other, the Pinteresque evasions we employ to avoid discussing the problems that most beset us. In the title poem, ‘Bags of broad beans, courgettes’ are the ‘unspoken messages’ by which her father talks to her. ‘The heart of my father’ suggests that the poet associates birds and aviaries even more closely with him: his ‘freckled face’ is ‘a speckled egg’. These properties and attributes of her father act as a kind of metonymy in that they define his personality quite as much as the metaphors – the fragile porcelain for instance, in the poem about his hospitalisation after a fall, or his taste for Bluff oysters (in the poem teasingly entitled ‘Bluff’). Broome’s Nana is another somewhat retiring member of her family (‘a good cook, but she doesn’t hug’):

what makes us such companions. I think there are

things we know about each other that we don’t know

she muses in ‘Nana in the upstairs bathroom’. It’s a profound paradox which can be explained perhaps by our often unconscious tendency to interpret, via fragments of what we know of them or the objects we most associate with them, familiar individuals who remain something of an enigma.

The poems focusing on parents and close relations are essentially good-natured accounts of incidents in the poet’s past in suburban Christchurch. The syntax is uncomplicated, the rhythms prosaic, and the narrative consists largely of detail that might have been taken from a diary: ‘Grandad went to the mental hospital’, ‘Dad falls and breaks his femur’. The strength of these poems is in their understatement, but some of them come perilously close to banality (‘Wine and cheese’, ‘One good frock’). Metaphor is used sparingly but tellingly: a brother who died in childbirth is described as a ‘little piece of chalk who didn’t get to make a mark’. Among these colloquial and unpretentious poems, however, there is another voice vibrant with the spectacular imagery of deep lyric song:

a heart that swells as the moon will

a skeleton of stars

flesh that knows the end of life

Broome writes (sings) in ‘Fontanelle’, the proem to the collection that provides us with a hint of the love she has received and that preludes the love she will bestow in the following suite of poems (‘Into the fontanelle pours love’). The last two lines quoted above foreshadow what could almost be described as a paean to her mother; by which I mean the poem ‘And we have all been each other’s mothers over countless lifetimes’:

I was your Mum once, we shared a

heartbeat and a pulse and we slipped

through a tear in the cosmos.

These lines evoke the old saw ‘the child is mother to the woman’, but are probably more concerned with the constantly turning reel of the tissue of life, what Joyce in Ulysses calls the ‘strandentwining cable of all flesh’ (‘The cords of all link back’). Interestingly enough, the word-play on cables and umbilical cords that Joyce exploits in this episode of his novel can also be found in the poem immediately following, i.e. ‘The telephone’, in which Broome puts a call through to her dead mother in ‘some place very high’, and yet ‘the cord / is from the telephone in our childhood home’ –  and it is the mother who says ‘softly and scratchily’, ‘Thank you’. These short lyrics of Broome’s open up profound perspectives on an intimate family life affectionately recalled. For a poet, there could be no more durable token of a daughter’s love. 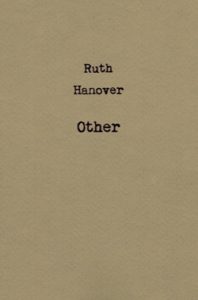 Another Christchurch poet appearing recently via Cold Hub Press with a first book is Ruth Hanover, but Other is quite literally miles away from Broome’s comparatively safe and comfortable suburban world. An ESOL teacher who has taught refugees in Cairo, Stockholm and New Zealand, Hanover’s book is as spare of conventional ornament as its plain cover with the three words (title and author) in typescript. This is not to say that the poetry is without artistry. Her often urgent, rhythmical, pulsing verse with its refrains of key thematic statements seems a skilfully empathetic evocation of the voices of a number of her students.

We follow Syrian refugees to Sweden where they learn that they are to be housed in tents – ‘the tent of my country has arrived here before me’, and it even contains ‘the heat of my country’. Another voice complains of being ‘in retreat’, growing ‘glacial’, learning to hunt like the Lapps:

Ah, but when I learn

the rudiments of fire, then

will I send for you.

And yet another in this ‘Tent’ sequence, having abandoned ‘all ideas of Mecca’, turns each morning in the land of the midnight sun to face his country and faces instead the wife and mother he left behind (‘On waking’).

The narratives tend to be impressionistic, elliptical, at times staccato, as in these lines from ‘Things they’ll strip you of’, in which a man sees his wife

the platform. We had just arrived –

he was leaving. It had become a habit.

In ‘Notes from a journalist’, the speaker is unable to interview a woman (a wife or close relative) held in detention. His voice trails off in half-rhymes and the repetitious phrases of sheer frustration as he feels ‘surge

in the press of you

fingers through the mesh of you

made notes, in the rain.

Made notes, made notes.

Two of the longer poems in this book show the poet using a more theatrical technique, in which two or three voices interweave and comment on the proceedings, carrying the narrative forward. ‘Arie’s bagels’ is focused on a small shop near Austerlitz railway station in Paris where Syrian refugees receive food and shelter from an ageing Jewish man, succour they find difficult to believe at first.

There is a bitter irony running throughout these poems, as you might expect of migrants suffering from survival guilt and culture shock, left in the end with ‘a memory of freedom’ rather than a genuine feeling of freedom. It is perhaps a freedom that can only be expressed in negatives (‘the safety / of the no bombs and the no starvation’). There is the sad irony of the Nepalese mother whose burnt Christ-like child ‘almost died to give us life here’ in Australia, ‘this land of plenty’, but the real ‘healers’ were the ‘three-wise-men-wise-women, doctors all’ who prevented the child from being returned to the detention facility on tiny Nauru Island. And there is the terrible irony of the young Jewish man who reads the Christchurch Star, who finding an article in blue print on an incident in Guantanamo Bay, concludes, with a grim pun, that had a Jew ‘anything to do with the running of a camp’

we would have lost it all

along the way. All notion.

As I’ve more than hinted, Hanover’s book is not only an act of sympathy – the poet has become the medium of the voices she has listened to so attentively throughout her career. Her work couldn’t be more opportune, appearing when the treatment of refugees is coming under a closer and more critical scrutiny. I am thinking particularly of the refugees in the USA, Australia and New Zealand, the very countries that have been colonised by migrants who were once the minority, who were once the ‘Other’.

TED JENNER has published three books of poetry, one book of prose poems, short fiction and travel anecdotes, and two books of translations from ancient Greek poetry, including The Gold Leaves, which concerns messages for dead initiates inscribed on minute strips of gold foil. His latest book is The Arrow that Missed (Cold Hub Press, 2017). He is a retired teacher living in Auckland.