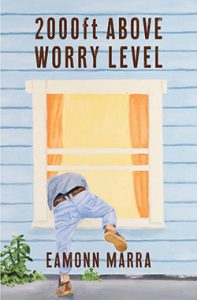 Eamonn Marra’s 2000ft Above Worry Level begins with a punch in the face. ‘I used to spend a lot of time on the sad part of the internet,’ says the unnamed narrator in his first sentence, and rapidly proves the point by showing what a saddo he is. The first segment of 2000ft Above Worry Level is about ‘cam sex’. In the narrator’s case, this means hooking up with a woman online and then masturbating in front of his laptop as she removes her clothes or otherwise visually stimulates him. Apparently this is the most meaningful sort of connection he can make with another human being.

Quickly we know where we are and where the narrator is – in a messy student flat where flatmates squabble over who should pay the rent, who is allowed to use which toothbrush and where the food is coming from. The narrator has signed on to, and then dropped out of, numerous courses of study. His life is aimless. He makes whole days revolve around small things – like picking a wart out of his hand. He lives on toast and peanut butter. He has a big student debt. He smokes weed and is in debt to his dealers. He is socially gauche in the extreme, terse in conversation, and yet at the same time trying to make an impression on others even if his best attempts fail. He prefers to avoid his flatmates.

Much of this is grotesque, sad and funny all in one punch. Funny because of the slapstick, as when he has to dive out the back window when two of his flatmates are shagging on the couch; or when the office chair he is sitting in sinks lower and lower as he is visiting WINZ and talking to his case manager. And even funnier because the narrator’s voice is so deadpan, matter-of-fact and totally unemotional throughout. But our laughter is nervous laughter, as we know other things are going on here. The narrator is permanently on anti-depressants. Much of his behaviour signals clinical depression, such as his obsession over small things, his inability to fully connect with other people, his frequent lack of focus and the difficulty he has in enjoying life. The blurb calls him ‘anhedonic’. Fair enough. This condition feeds into the level at which the narration is set – without joy or sorrow. That unemotional, matter-of-fact tone is both desperation and coping strategy, papering over the deep abyss of sorrow and meaninglessness that is depression.

Eamonn Marra is (so the back flap tells me) a live-performance comedian whose first book this is. I’ve never seen him perform but I do see in 2000ft Above Worry Level some of the techniques that the newer generations of ‘confessional’ comedians often display, especially the understated presentation of uncomfortable, embarrassing, sexually humiliating or desperate things, usually played as autobiography and with the punch-lines of the routine given as throwaways. Reading the first third of 2000ft Above Worry Level, I kept thinking of lugubrious Neil, the hippie with the monotonous voice played by Nigel Planer in The Young Ones way back in the early 1980s. The comparison isn’t quite accurate, however, as the narrator of this book is a contemporary New Zealander and all the social references are specifically New Zealand ones. Also, this narrator is more self-aware and self-analytical than poor old Neil ever was.

Yet I admit beginning to feel slightly exasperated with the narrator and his world by the time I had read the first part of 2000ft Above Worry Level, which takes up about a third of the book. Was the narrator ever going to develop? Could there possibly be anything more to say about him? Would he be stuck in the mental haze of depression, anhedonia and holding the world at arm’s length?

I got my answer when I moved into the second part of the book and found Eamonn Marra writing in the voice of the same first-person narrator, but shifting perspective radically and in the process producing a really great story.

The story that also gives the novel its title, ‘2000ft Above Worry Level’, has the narrator recalling events from when he was eleven years old, when he, his mum and dad, big brother Toby and the girl Georgie (their cousin) are taking their annual holiday in a camping park in Naseby. The narrator makes friends with a chronically sick and slightly nerdy kid called Elliot. On the surface it’s a tale of early adolescent adventures. Narrator and Elliot get involved in a competition to earn money by catching wasps that are plaguing the holiday spot. They go on long bike rides together. There’s the wry comedy of Mum and Dad finding ways to get rid of the kids so that they can have some undisturbed peace in the family-sized tent they’ve put up.

But this is only the surface, as budding sexual tensions among adolescents are also here. A group of slightly older teenagers eye up young Georgie with sex clearly on their minds. Big brother Toby bullies the narrator and his friend by unsubtly suggesting that Elliot is gay. At the same time, Toby is possessive of Georgie, resents the teenagers’ interest in her, can do nothing about it and so is clearly taking out some of his frustrations on his kid brother. Part of this story’s brilliance is the way Marra suggests all these things without spelling them out. His style is classic ‘show, don’t tell’. We understand what is burning even if the kids themselves don’t. That ‘2000ft Above Worry Level’ leads up to a terrific and unexpected climax is a bonus, but it is not the heart of the story.

Marra’s narrative skill is the way he weaves together a large group of characters, making their motivation clear but still keeping to the narrator’s concentration on material facts. It’s at this point, too, that we realize 2000ft Above Worry Level is not simply a collection of short stories. It is a unified whole, constituting a new sort of novel. When we have finished the title story, we understand that some of these adolescent experiences are what went into the making of the depressed, alienated twenty-something student whom we’ve already met.

After a short interlude (a childhood memory called ‘Santa, the Christmas Hedgehog’, which reads like a stand-up routine), Marra produces an equally brilliant chapter called ‘Home’. The narrator, now out of his student flat, has moved back in with his mum, in a new house she’s acquired since separating from her husband. Despite the story’s title, it isn’t home for the narrator – but then nowhere is. The narrator loafs, idles, tries to fill in his days meaningfully and accepts the task of painting his mum’s fence, but the job seems to go on forever and really gets nowhere, like the narrator’s life at this stage. A simple narrative? Not at all. Like ‘2000ft Above Worry Level’ it is complex in its implications, telling us as much about the narrator’s mother, who is offstage for most of the action, as it tells about her son. Little surface details signal to us a life as desperate for her as it is for him. Again, like the title story, ‘Home’ has a sharp and definite conclusion, but it is not a facile O. Henry-like sting-in-the-tail. It is the inevitable and logical outcome of what we have already inferred about the characters.

In material terms, the narrator has moved on a little in the five chapters of the third and final section of this novel. At least he has some sort of job, seems to have his life a little more in order, and is beyond the student flat stage. The flatmates he is now with seem more couth and ready to help one another. But the narrator’s voice persists, as does his lack of a goal. There’s what amounts to a running gag where the narrator claims to be either vegetarian or vegan, but finds reasons to eat meat anyway. This sort of irresolution is most marked in the chapter ‘Three Pizzas’. In hospital (the chapter ‘Syndrome’) his depression is addressed directly. He knows he isn’t the sort of guy to make a splash in social situations (the chapter ‘My Friend Rod’). A real and meaningful relationship with another person is suggested as being vaguely possible, but we know this is no certainty when the narrator ends up standing on the edge of a cliff. Maybe there will be a release from his condition and maybe not.

Even when the subjects are depression, alienation and anhedonia, the good, focused and tone-perfect prose and the understated humour collaborate to make 2000ft Above Worry Level more than an impressive debut. It’s easy to relate to. It’s cunning. It gradually builds up a totally credible picture of a complex human being. It is everything it should be.

DR NICHOLAS REID is an Auckland poet and historian. He writes the book blog Reid’s Reader.