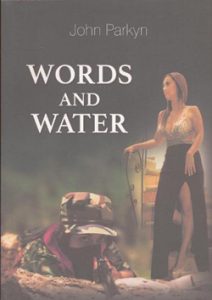 Many decades ago John Parkyn and I worked in the proofreading room of the Herald. We were aspirant writers. At my count, there were at least four (maybe five) hopeful writers in total. Proofreading rooms were like that in the 70s – would-be artists, poets, miscellaneous misfits, left-wing desperados, people who had not yet found their niche were part of the mix. Plus ‘seagulls’ (casual employees on the wharf) and posties. Writers just seemed to emerge out of this diverse compote. Today, writers go to university and do courses in creative writing.

Back at the Herald proofreading room I had stolen a march, for I had already begun publishing short stories in Islands and Mate. But hold everything! According to urban legend (and my apologies to John if the ensuing anecdote is inaccurate), Parkyn wrote a novel while in his twenties, but it did not win the competition it was intended to win, and one night he burnt it: the only copy.

Some decades later Parkyn cashed in his proofreading chips and moved to Mexico, where he has been ever since. Mexico has not been tardy in providing him with copy. It has stimulated a short novel, (The Ambush), a collection of short stories (Don Vicente’s Daughter and other stories) and currently Words and Water, probably his strongest work to date. There is an unmistakable verve to Parkyn’s writing which hints that though he may be senior in years, his creative vigour will continue to produce interesting work.

The central character of Words and Water is Brin Munro, a New Zealand engineer whose work takes him all over the world. He is a Kiwi’s Kiwi – cool under fire, laconic, moderate in manner, more inclined to withdraw than participate when a fracas is brewing or if a conversation takes a disagreeable turn. In quick succession he meets vacuous Sharon and husband (not named for a good reason as we shall subsequently discover), artful operators, citizens of the world, then a rather fatuous gay professor called Porthon and a bullying Hungarian profit-mad boss called Zoltan. Porthon sounds like a character out of a Hammer Horror film who badly needs a makeover: ‘a fat, oily-looking chap, well into his seventies, surrounded by a distinctive aroma of gin and wearing a purple, liquor-stained safari suit. He had rheumy, fishlike eyes, of an indefinable colour, a pointed chin, a straggled unkempt moustache, and a drooping lower lip.’ Nonetheless, he has a companion.

This is just a selection from a bunch of socially inept, jingoistic types led by the champion of social misfits, Mike Lever, a muscular athletic Brit who likes his booze a tad too much and long-legged girls even more. Brin, by contrast, is always gallant and chivalrous, especially when a lady is in trouble. Put like this, he sounds a bit like a knight in shining armour, but on balance, he is a convincing hero and it’s nice to think that a New Zealander can fly the flag in a manner that reminds one of soldiers during the war: stoic and steadfast when called upon, and living their lives by an honourable code.

In my travels I have met the odd avatar of Mike Lever. Usually not athletic, more red-faced and corpulent, keen on getting inebriated, making lots of noise and getting into mischief – not a good idea in foreign climes. What’s the explanation for such behaviour? Maybe it’s the ancestral memory of when Great Britain ruled the waves. Lever’s rant supports such a notion. Here’s Mike Lever in full right-wing flight: ‘Thatcher knows how to deal with Arthur Scargill and his communist mates. She smashed them and the unions to pieces, didn’t she? Best prime minister we’ve had since Churchill.’ This is just a warm up for Lever’s chair-elevated rave: ‘“Champions for ever! Battle of Waterloo!” He thumped his chest fiercely three times. “Spanish Armada! Battle of Britain! World Cup!” He thumped his chest again. “Who wins? We do, of course. Good old Mother England.”’ One would like to think that only a man several sheets gone to the wind could carry on in such a manner. Whatever he does, Lever is backed up by his underling associates Frank Skinner and Jim Hodge, toadies that egg him on to try his supposedly successful hand at anything that strolls by in a bikini.

We’re not yet done with the lecherous right-wingers. Next up is Osvaldo Vargas, an Argentinian cattle rancher who speaks approvingly of generals Videla, Viola and Galtieri, who ruled Argentina by means of torture and mass execution in the late 70s and early 80s. Vargas, like Lever (and Brin also), has been eying up a ‘mysterious’ young woman called Alina who is always alone and keeps to herself. She is stunningly beautiful. Vargas informs Brin that the young woman is a ‘puta’ or prostitute, though the text offers no details that might justify such an assertion. ‘I know women like the back of my hand,’ asserts Vargas. ‘Studied them all my life.’ And learnt little, one must conclude.

Brin makes the mistake of trying to act as a go-between for Mike, based on the flimsy excuse of Mike not knowing Spanish; the scheme backfires and now Brin too is tarred with the brush of the lecherous Englishman.

The aloneness and aloofness of Alina is abruptly shattered when she enters the sea obviously intent on ending her life. Fortunately, Brin is on hand to rescue her. I have been told that those who attempt suicide can be angry at having their shot at self-destruction thwarted. The text tells us that this is the case: Alina punches and claws at her rescuer. On this subject, I will admit I have zero experience.

Now, well into the novel, we finally get to hear Alina’s story. Here Parkyn pulls out all the stops. The prose is of expert Hemingway-esque economy. We hang on every word. Alina’s is a gruelling tale of politics and cruelty. Her original ‘love’ was Ramon, a young man of distinguished connection whom she was originally to marry, a man connected to the Nicaraguan oligarchy, the super-rich ‘who owned country houses, beach houses, coffee plantations, cattle ranches, factories, while most of the population was completely impoverished’. But her left-wing consciousness was gradually awoken after she saw a Sandinista rebel gunned down on television.

The earlier drunken right-wing rhetoricians are similarly forgotten. Now we are in Alina’s world, tragically rich in political brutality. She finds a new love in Alejandro, a Sandinista who entrusts her with various tasks. Unlike Ramon, he comes from humble origins. As she changes her politics, Ramon hardens up – hence they are both moving in opposite directions, politically speaking. The text informs us that atrocities were committed on both sides. Through a chance remark, Alejandro is apprehended. The price for Alejandro’s return is sex with Ramon. She submits to his brutish embrace. The horrifying climax is that Alejandro is brought in and though he is vertical, he is no more than a corpse held up from behind. She is the victim of a vicious trick.

In my view, Alina’s confession contains the finest writing in the book. The aftermath, which I found somewhat less satisfying, reveals that Sharon’s mysterious husband, whom we encountered at the beginning of the book, is actually Ramon, who is suddenly and shockingly shot by Alina. She escapes with Brin’s help. However, there is no happy ending hidden up the sleeve of the text. Alina dies of cholera. Thus, the romance that might have flourished is terminated.

The drunken loutishness of the earlier chapters is thereby overtaken by the harsh ruthlessness of Latin American politics. This is a scenario that could not be duplicated in Aotearoa. It belongs to countries that have abrogated humanity allegedly in the name of politics, but more accurately in the name of a warped revenge.

MICHAEL MORRISSEY has published twenty-three books – twelve of poetry, three short novels, one full-length science fiction novel, two books of short stories and edited five others, mainly short fiction. He won the MacMillan Brown Prize in 1977 and was the first writer-in-residence at the University of Canterbury in 1979. In 1985 he was the first New Zealand participant in the International Writing Program at the University of Iowa.