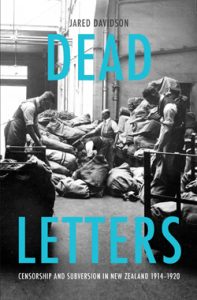 Reading the history of the years of the First World War and after through the experience of those who were outside the dominant political narratives of the time is a welcome step in presenting diversity, at a time when national borders in many places are being reinforced rather than opening up. Jared Davidson’s diligent research brings hitherto untold stories into the historical mainstream and extends our understanding of what life was like during these much-memorialised times. Although the subtitle seems broad, most of the evidence about censorship and the widespread resistance to it in Aotearoa New Zealand at the time of the First World War has come from government-censored letters: hence the book’s title. Some further discussion of newspaper, magazine, film and publishing restrictions might also have been set beside this intriguing discussion.

Extensive examples of the movements and events attended by anti-war and anti-conscriptionist activists, as well as strikes and working-class activism, give a vivid sense of the hardships and restrictions faced by those who challenged the dominance of British – or what is sometimes referred to as English – networks, and of class structures. Many of the chapters proceed by way of close explanations of the letters, which read rather like case studies for the observations that follow. Davidson gets very excited about letters such as those from the Army Department’s Secret Registry, which he claims, are ‘a real treat’. Sensual descriptions of the joys of research don’t come much more eloquent than his.

Since a lot of the correspondence was lost in a fire in 1961, the letters represent only a fraction of the vast volumes of correspondence confiscated by the censor in Aotearoa New Zealand. The Secret Office in Britain, where the scrutinising of mail was done, was closed in 1844 when the Italian nationalist Mazzini challenged the House of Commons to prevent letter tampering. Davidson’s sense that the government of 1914 New Zealand was more repressive than Britain itself is borne out by statistics showing more arrests and continued censorship designed to exert ‘social control’; but this changed over the war period as New Zealand control became more erratic, resources stretched too far, while Britain employed nearly 5000 censors and France more than 5000.

Citizens of German heritage were often subjected to constant harassment, and the state, run by Reform and National coalition governments, made little effort to protect them, as evidenced by a detailed account of the life of German-born Marie Weitzel and her extended family. The company in her homes – she was repeatedly forced to move on – attracted a variety of radicals and non-conformists; her daughter Hettie Weitzel was a founding member of the New Zealand Communist Party. The Registration of Aliens Act of 1917, introduced as part of wartime surveillance at the height of the conflict, made conditions even more difficult for already marginalised people. Dalmatians too were often regarded as potential subversives.

A letter to Norway from one Even Christensen in Dunedin in 1919 complains at length of the prejudice against ‘foreigners’ who were not of English persuasion, Christensen’s continued complaints eventually led to his denaturalisation. The vividly expressed thoughts of Tim Brosnan, whose letters advocating Irish Home Rule left him deprived of his civil rights, his wife and family, and those of Frank Burns who, threatened with conscription, scarpered and went bush, cannot fail to impress on a contemporary reader the exigencies of the time. Many correspondents here fled to Australia, where conscription was not imposed, but the Australian censors shared volumes of information and cross-checked constantly with those in New Zealand to help capture dissenters of many persuasions.

As the introduction by Charlotte McDonald notes, 1914–20 was a period of ‘turbulence’ and diversity not easily packaged in terms of patriotism, nationalism and support for the war effort. The letters revealed in Davidson’s research depict ‘a map of radical New Zealand c. 1914 –1920’. The study takes readers into:

the world of agitators, nonconformists, socialists, anarchists, Irish nationalists, questioners of authority, visionaries (including a dairy farmer poet and prophet seeking news of Bolshevism) and a ‘Von der boch’ stirring questions of the war ethics of capitalism in Waitara … a New Zealand beyond the pieties of the war memorial.

The diversity revealed is indeed noteworthy. Yet a study of censorship and subversion that only devotes a few paragraphs to Te Puea, Rua Kēnana and Māori resistance is a book that only partially tells the story of the years of the First World War in Aotearoa New Zealand. Given that Davidson’s timeframe is a tight one, it’s understandable that there may not have been a lot of accessible archives available for comment – but even this would have been worth explaining in detail. Without clarification about the under-representation of Māori responses to wartime conditions, there is always a sense of those missing narratives that might well require another volume to recover. In the interests of a balanced narrative, further comment on how Jewish people experienced the war in New Zealand at that time, Pacific people, those of Africa and Asian ethnicity and on religious groups in general (Catholic participation and resistance is included in deliberations on how Home Rule objectors were treated) is necessary.

Chapter Seven is devoted to a reading of love letters from women, which were found in the possession of Hjelmar Dannevill, a woman who claimed to have been born in Copenhagen in 1862. Her story involved a tale of cross-continental searches for information about venereal diseases (funded by a wealthy patron), alternative medicines, naturopathy and imprisonment as an enemy alien in 1917. The author does a careful and convincing job of reading this situation as the clumsy imposition of state gender policing imposed on a lesbian woman because ‘non-normative expressions of gender and sexuality were linked to broader notions of economic and social disorder’. Dannevill was sent to the notorious Somes Island internment camp – one of several – for two months, where she had a severe breakdown. Conditions in Featherston, Roto Aira, from where Tim Brosnan sent his sample letter, and in other camps where suspects and those convicted of various offences against the state were held, were frequently appalling. Many died of illness, disease and neglect during their internment. Conscientious objectors were subjected to terrible beatings, to which the letters of fellow prisoners remain as testimony. Dannevill’s history at least had a comparatively happy ending; she later settled in the more tolerant location of San Francisco with her lover, Mary, and Mary’s three children, where she practised as a physician.

As told by Davidson, Dannevill’s story exposes the way eccentrics – those who did not attempt to hide their differences or their correspondence as well as those who were deliberately challenging dominant culture – became the target of suspicion from both the general public and police. The story of Arthur Muravleff, an itinerant writer and worker who claimed to be of Russian descent, reads like a Charlie Chaplin farce at times, but as he was repeatedly accused of spying, imprisoned as an alien and eventually disappeared without trace, it is ‘bitter’, tragic and ultimately puzzling. Davidson summarises Muravleff’s plight eloquently, using a metaphor of the lone stormy petrel at sea from a Maxim Gorky poem.

The activities of working people, strikers and the most politically radical, represented often by the International Workers of the World, were, of course, closely watched. ‘The Wobblies’, as they were known, were constantly harassed and pursued by police and government officials, although they were not banned as they were in Australia. Anti-war and anti-conscription protest was vigorous and ongoing, evidenced by the formation of the widely supported Second Division League in 1917 to oppose conscription for married men. After dramatic confrontations in Christchurch, the leaders were imprisoned for sedition. Davidson traces the movements of individuals and group activities that were under observation throughout and beyond the war. He consistently contextualises events in Aotearoa in terms of the influence of worldwide events and histories. The extent to which war regulations were maintained and imprisonment continued after Armistice demonstrates how accurate those commentators were who saw the war as a chapter in the ongoing imposition of global capitalism. The 1919 Immigrants Exclusion Act was, for example, effectively a ‘strengthening of the apparatus of state surveillance’. The author makes apt analogies between the censorship of the years in his research framework, and present forms of surveillance – from propaganda as fake news to the ‘five eyes’. Post-war alternative lifestylers prepare the ground for hippie culture. A visit by Edward VIII, intended to promote loyalty to crown and country and to counter the rise of working-class criticism, caused the prince himself to ask if royalty was outdated and whether perhaps he was a bit of a ‘Bolshevist’ himself, though he was not subjected to the censorship that New Zealand citizens were for these reflections.

Though there is a sense that they speak very well for themselves, the missives are a slang collector’s dream, and I’m still trying to work out what some of them mean. Any offers to translate ‘last time I heard from goat-gulley everything was pie on the kittens-kidney’ – which comes thanks to the loquacious Frank Burns aka Frank Lonnigan aka Jack Hay – are welcome. Historians of course are careful not to embroider the facts, but there are already examples, such as Judith Binney’s extensive interpretations of documents, that might have made this vivid account even more compelling. As a literary reader, I would have found semantic or linguistic interpretation of the letters fascinating. Yet given the restrictions there must be on time and research expenditure, this book and its exposure of the letters it makes accessible are an invaluable addition to the history of the times, and in the development of Aotearoa New Zealand.

BRIAR WOOD grew up in South Auckland, Aotearoa New Zealand. Until 2012 she lived and worked in Britain, where she published poetry, fiction and essays. Her recent writing has been inspired by her return to Northland places, where her whakapapa connects her closely to ecological concerns. Her poetry collection Rāwāhi was shortlisted for the Ockham Awards in 2017.