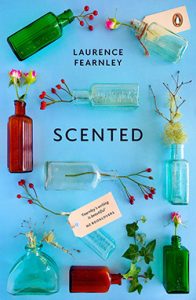 This pukapuka made me feel really hard done by. The core premise of Laurence Fearnley’s novel Scented is that the smellscape of the world we live in is as rich, complex and omnipresent as that which we experience by any other sense. I kept stopping to sniff the air while reading and could rarely smell anything at all – let alone analyse the different layers, tones and ingredients of scent. I started to feel that either I was lacking, or was being duped.

Scented, set in contemporary Aotearoa, is the story of Siân, a middle-aged Pākehā woman of English descent. In childhood she develops a lifelong passion for analysing scents and creating perfumes. Siân grows up to become an academic specialising in American Studies – a job she loses when her university department is disestablished. This comes as a significant blow to Siân’s identity, and so she decides to rebuild by creating the perfume of herself. Scented is the story of this process, told in the first person both in the present and through flashback.

It took me a long time to warm up to Scented. This is partly because Siân, the protagonist and narrator, is neither particularly warm nor much given to seeking warmth in others. Her father died when she was a child and she isn’t close with her sister, nor does she have any contact with her English whānau. Siân has some romantic relationships with men and women for a while as a young adult but then gives up dating altogether. ‘I realised that sex, for me, was largely irrelevant … I didn’t long for intimacy.’ Siân professes herself ‘quite satisfied with the broader social contact I enjoyed through colleagues at work, flatmates and friends’ – yet seems unable or unwilling to do the work necessary to maintain even these relationships. She lets an important friendship drift out of her life: ‘We were both too naturally solitary and inward-looking to maintain regular catch-ups and conversations. We needed a bridging friend … Left to our own devices, we would … never quite muster the energy to meet.’ Being friends with Siân frankly sounds like a lot of work for not much reward. I started to wonder whether Siân’s passion for scents was a replacement for her apparent lack of interest in people.

Some characters in novels dance into your brain demanding attention; in contrast, I found Siân a cool, self-contained presence in my head. I kept thinking of the egg-like Eva robot in the film Wall-E when she snaps shut to guard the sapling: no way in, no way out. A smooth, uninterruptable surface. Contributing to this sense was the fact that Scented is a work about one sense (smell) that I experienced with another (sight). The whole way through reading I felt disconnected from the heart of the story; the smellscape of Siân’s world. This is incredibly detailed and complex: for Siân, smells have base, heart and top notes; they change over time; they have their own history and language. Siân can sniff a perfume and pick out the individual ingredients. She has a mental database of a massive range of different scents. For example, this is what she smells when she sits at her table: ‘The smell was muted, but I could detect some of the notes: the incense-like smell of frankincense, the beautiful rich Bulgarian rose, the smooth amber, the forest floor of oakmoss. I’d missed these smells. It felt so good to feel their presence once more.’

I cannot smell as Siân does – although I took so many big lungfuls of air through my nose while reading that I made myself lightheaded. It was different from, say, reading a pukapuka about a character who loves music. Although I am only a casual listener, my ears function well enough that I can hear music just fine. I can tell which instruments are playing, and can experience the emotional and sometimes physical impacts of the art. But with smell – not so much. I’m not keen on perfume because something about it often makes me feel a bit ill. In fact, a lot of my reactions to scents are negative. I avoid taking the car to the petrol station because the smell makes me gag. My shitty high-school boyfriend used to wear a very popular cologne. Every so often I’ll catch a whiff of someone else wearing it and will be reminded of times I’d rather forget.

Eventually I worked out that the main reason I was having trouble with Scented is because I resented the fact that Siân lived the main part of her life in a world that feels physically inaccessible to me – and the fact that, until I read this pukapuka, I had been happily unaware of my own limitations. This hadn’t happened with Perfume: The story of a murderer by Patrick Süskind, the only other novel I have ever read that is primarily about a person’s sense of smell. Perfume is so fantastical and creepy that I had no trouble believing that the main character’s olfactory superpowers were entirely made up. But Siân feels real. I did a bit of googling and discovered that Fearnley herself has a sensitive nose. She wants to set up a society of people who go places and sniff them in order to appreciate the richness and complexity of the smellscape in that particular location. This is a society I cannot join.

Or could I? Perhaps, if I work at it, I could learn. Scented ends rather unexpectedly with Siân becoming aware of her racial privilege as a Pākehā person in Aotearoa, a member of a colonising race. She starts researching the lost ‘Grand Māori Perfume’ with a view to recreating it, before realising that it is not her place to do so:

Despite spending years of my life focused on scent and perfume culture, I was ashamed to admit that I knew absolutely nothing about Māori perfume … I was born in New Zealand, had lived here all my life and valued notions of the unspoilt landscape, the bush and sea, and yet, when tested, my instincts and preferences sent me sniffing back to Britain. I felt as if my nose had betrayed me … The realisation that I was somehow perhaps not of this land filled me with a sadness I hadn’t expected.

Siân realises that her scent education has been influenced so heavily by overseas perfumes that she does not have enough of a sense of what Aotearoa smells like. So she sets out to learn. ‘My aesthetic is all wrong. I don’t know how to smell native plants because my nose keeps drawing me back to smells I already know and appreciate … I have to teach myself a new way of smelling.’ Being the solitary type, Siân wants to do this as much by herself as possible. So, rather than reaching out to kōrero with tangata whenua, she moves from the city to the countryside and … smells it.

Reviewers often criticise Fearnley for the exactness and quietness of her writing. It is certainly true that her work is finely controlled and crafted, but I don’t find this to be a disadvantage. The self-contained-ness of Fearnley’s writing left lots of room for my own emotional responses, which I felt I was pouring over this pukapuka in great waves. Having felt initially that Siân was in some mysterious way giving me the cold shoulder, I ended up respecting and rooting for her.

The heart notes of my signature scent are deep and dark, like a pool of still water in the bend of a river … I need to look and feel and taste and sniff. I need to capture a sense of place, this place, not some land that lies across the ocean … So now the top notes. The final addition to my perfume, the bursts of energy, my here and now, and the way ahead.

Scented ends on a feeling of hope. If you’re after a deep dive into the feeling of smelling, I recommend it.

After I had finished reading, I lifted my print copy of Scented up to my face, opened it at random, pushed my nose right into the gutter of the pages and inhaled. I smelled paper and ink. It’s a new pukapuka so it doesn’t have that dusty smell that makes second-hand bookshops seem slightly mysterious. But it’s not so freshly new as to have that sharper, more chemical ‘hot off the press’ smell that I associate with the excitement of opening a box of books straight from the printer. My copy has been hanging around for a few weeks, so its scent has settled into the softer, more comfortable smell of a pukapuka in the prime of its life. I think Siân would approve.