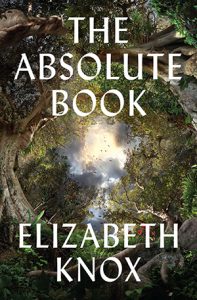 Fantasy comes with expectation. It’s a genre of escapism, often involving a very literal escape from one world and into another. Escape, however, is rarely so linear, and there is an expectation that the problems of one world manifest themselves in new ways in another. What it means to be left behind, what it means to compromise yourself, what it means to lose faith and then find it again … these are questions of isolation, of consequence, and of the transformation of self that goes with the movement between worlds.

Epic fantasy, in particular, is characterised by secondary worlds, and The Absolute Book is described as epic fantasy by its publisher. Genres split as finely as hairs, but the focus here on the alternate worlds – the alternate scales – of angels and fairies leans this more towards urban or contemporary fantasy, where these creatures are commonplace. Taryn, in a manner typical for the urban fantasy protagonist, has as much trouble navigating the real world as she does the alternate ones. Refusing to connect with others since the violent death of her sister Beatrice, she nonetheless arranges for the death of Beatrice’s killer.

Beatrice, it is quickly clear, was not the victim of a stalker. Webber may be dishonest as well as vicious, but he is certainly unprepared for murder. There was a woman, alone, and he ran her down. The act might have represented a long-held fantasy, but the realisation of that act was pure impulsiveness. He had wanted a woman ‘stunned and helpless’ (15); instead the initial impact of his car caused far more damage to Beatrice than anticipated. It made her unclean. ‘Why I put her in my trunk rather than my back seat must have been because she’d soiled herself and was a bit of a mess,’ he states (13). The slim plausibility of this excuse allows Webber to avoid responsibility for his actions – at least in his own mind. ‘He hadn’t meant to hurt Beatrice and was indignant that anyone would suggest he had. He just ran into her, then panicked’ (15). It’s sloppy opportunism on his part, but when it comes to her own criminal activities, one can’t actually say that Taryn behaves any better.

Webber is jailed for five years, and Taryn spends those years trying to ‘starve her rage’ (15). Then she meets a man, the Muleskinner, for whom hunting is a way of life. He makes her an offer. She knows nothing about him. She doesn’t stop to think about the psychology of a man who offers up murder to comfort a stranger. All she does is swerve. There’s sudden opportunity, and she takes it. She excuses it as well. There are reasons, and impulse, and Muleskinner to blame.

It’s the soiling herself that did it, and in more ways than one. ‘Webber’s fastidious distain had rearranged things inside Taryn, permanently. It taught her something a forensic psychologist might learn by interviewing multiple murderous misogynists’ (336). It convinced her of murder, twice. It results in a moral stain that makes Taryn vulnerable to possession and then to damnation; it makes her aware of the alternate worlds around her. These are worlds that reflect, and are reflected by, the existence of stories. The moral triptych of Taryn, Webber and the Muleskinner is a representation in character of the ways that narratives also influence and mirror. In particular, The Absolute Book leans heavily – in fairy as well as afterlife – on the influence of The Divine Comedy. The Paradiso is particularly concerned with the ideas of substitution and sacrifice, salvation and free will and theft. That theme is reflected in this text. What can fairies offer up that is not themselves? What can Taryn offer up that is? Is there, really, any fundamental difference? The fairy teind (or tithe) is miserable enough – come out of folklore and Tam Lin, it’s the sacrifice of mortal souls to hell in order to ensure continued fairy immortality – but truthfully, here it is little more than illustration. The real exploration of choice comes in Taryn’s trip from her everyday human hell into Purgatory.

Purgatory, in The Absolute Book, is an untrustworthy place. Taryn journeys into it, looking for a book. It’s contained in a box called the Firestarter, which has survived any number of library fires, and was formerly in her family’s possession. Taryn thinks her dead mum Addy might know where it went, but before that particular conversation, she has to confront the Muleskinner. He’s not enjoying his own afterlife, having lost his earthly existence to a supernatural saltwater crocodile. There is, by the way, a wonderfully horrifying description of his subsequent appearance:

He was lying face up to drag himself along. His arms were twisted a full hundred-and-eighty degrees, shoulders out of their joints, the bone of the ball and socket making lumps in his armpits […] His hips were twisted sideways. One leg worked a little and he was digging it in to help drag himself between them and the doorway. His other leg was a mast, dislocated at the hip and knee, sticking straight up. (523)

A death roll couldn’t happen to a nicer guy. Yet why is the Muleskinner in Purgatory to begin with? If Taryn is destined for hell because she asked (albeit in the wimpiest of ways) for him to kill Webber, why is the Muleskinner, who went through with that murder and attempted a couple of others in the most sadistic way possible, flopping along the Purgatorial pavement?

Divine punishment is looking remarkably inconsistent, if you ask me. Taryn, who has at least moved on from excusing her own attempts at sloppy opportunism, also refuses the Muleskinner’s attempts to excuse his own. I’m sure this is progress. I’m just not sure that it’s real. Consider that the reason Taryn is in Purgatory to begin with is to ask her mother where the Firestarter might have gone. Ergo, Addy is in Purgatory … except she seems a lovely woman, not especially sinful either, unless you skew the lens of idealised motherhood and see her punished, primarily, for her emotions, as she sinks into despair following her child’s murder.

It’s noticeable, however, that neither character gives Taryn anything new. Addy offers up a clue to the location of the Firestarter, but that clue only links information Taryn already possesses. Addy is a reminder, not a source. Purgatory does allow the Muleskinner to continue his role as mirror, it’s true. A sulky, hideous mirror, but if Purgatory allows Taryn to conjure up a vision of her own acknowledged sin, to explore the limits of her responsibilities, then the disjointed remains of the man she shared a murder with could hardly have done a better job. (I can’t help but wonder what Webber, real or not, might have said. What Beatrice might have said. When a story is this reliant on reflections, these are wasted opportunities. Even Dante’s Beatrice got to speak, and he only met her twice.)

Purgatory may be real, but there’s no certainty that Taryn met anyone there – let alone her mother, or a companion in murder. The only certainty is that she met herself. And that’s Purgatory all through: a place of shifts and instabilities where the soul can apparently confront itself, clear-eyed. It’s a setting that in its confrontation of compromise has always sat well with Fairyland, itself a place defined by opportunism and the squaring up of morals and consequence.

In all honesty, the very ubiquity of fairies in modern fantasy has soured me on them somewhat. If they must be used, however, then Knox has underlined the themes surrounding the fairy teind in an effective – if understated – way. It’s that fantastic expectation again: sacrifice over worlds, a concept that can’t be escaped just because the setting is different. An eye offered up to the world tree and Taryn, losing perspective at the base of another tree, the one her sister died at when Webber ran her down. The women left behind in fairyland, shrieking their grief as their sisters are cut down and sent to hell. A book of bone and skin and screaming, because loss is a burning thing, printed and imprinted on bodies, and what can be done about that?

I wonder, though, if at times these connections are too understated. There is a difference between subtle and absent, and I finished The Absolute Book wondering if expectation had coloured my experience of it, or if the connections were obscured by the desire for scale over clarity. There is a weight of detail and wandering here – such are the things of which epics are made, and may have contributed to that descriptor – but this can sometimes make The Absolute Book seem a little unfocused. The book’s at its most successful when it focuses on relationships and mirrors, when it undercuts escapism – and there are several hundred pages here that can sometimes obscure that.

Those mirrors, polished up in service of character, are really portals into possibility. They’re reflections of choices, of moral decisions, and they serve as illustrations of what can happen to an individual if they compromise themselves past the point of return. The Muleskinner and Webber are both reflections of what Taryn herself could so easily be – her worst desires, her reliance on impulse, and most of all her ability to excuse and to shift blame. Crucially, they’re illustrations of the biggest, most fundamental aspect of fairyland … that however many portals you run through, you take yourself with you. And that has always been one of the strengths of fantasy as a genre. It dramatises or ‘figures forth’ temptation, and allows characters, in other worlds, to come across themselves.

OCTAVIA CADE is a NZ speculative fiction writer. She has sold close to 50 short stories to markets such as Asimov’s, Clarkesworld and Strange Horizons, as well as a handful of longer works to various small presses. She attended Clarion West 2016, has won three Sir Julius Vogel awards, and is the 2020 writer-in-residence at Massey University – the first time the position has gone to a speculative writer! She can be found on Twitter at @OJCade.