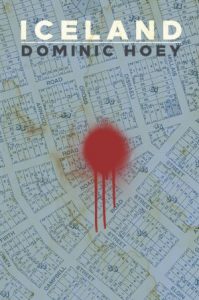 Iceland is the story of a doomed relationship – a train wreck we know will happen, and yet, of course, we can’t look away. This is the first novel from Dominic Hoey, also known as Tourettes, a musician, rapper and poet. The story’s structure is watertight and it drives the reading experience – more so than the narrative content. The chapters count down from sixty-eight, alternating perspectives between the main characters, Zlata and Hamish. It’s this fantastic tension that hooks you in and makes it hard to put the book down.

Zlata, a hopeful singer-songwriter stuck in an office job, meets Hamish, a graffiti artist, beneficiary and occasional drug-dealer, at a party. We are already looking towards the end, wondering how this relationship will pan out. Hamish is the most predictable of the two protagonists: a series of destructive decisions makes it likely that he will continue in this vein and play out a fate that feels tragically predetermined. In the beginning, Hamish’s friend Rapley is presented as the wild card; his erratic behaviour could well divert his life off the rails. But as events unfold, Rapley seems to step up and take responsibility, with Hamish not able to follow suit. We are left to question what Zlata will do in response – will she stick with Hamish or let him go?

There is a second and arguably stronger love story at hand between the writer and the city of Auckland itself. Hoey includes an entire chapter on Karangahape Road, its sex shops, ‘drag queens and drug addicts, hipsters and homeless’, and how stories passed between these people ‘became finely honed fables, legends of the central city’. Many of the characters are estranged from their families but have created a makeshift family unit for themselves from the friends around them, all intrinsically linked to their location. Much like the story of Zlata and Hamish, this isn’t presented as a fairytale relationship but a state of being absolutely bound to the city: whenever you think you might break loose, it pulls you back in; and even if you do escape you’ll find your way back to it in the end. ‘Nobody ever really leaves,’ Zlata says of Auckland. For this reason, what happens at the end of the novel feels like a tremendous display of power and freedom.

Auckland is presented as fractured, contrasting and in a state of flux, its bohemian circles slowly being pushed out of the city. From Grey Lynn house parties and grimy late-night central city streets to the upmarket wine-bars of Ponsonby – everything is on display, clashing together. The scenes that take place in WINZ offices are striking – they depict in grim detail the practical elements of being unemployed, the frustrations, the humiliating hoops that beneficiaries must jump through, and how it feels to interact with staff who appear to have little compassion for those who come through their doors. Hoey is not afraid to be a New Zealander and to show modern-day Aotearoa in a bright light, ugly as it may be.

Hoey does a good job of avoiding stereotypes and caricatures, especially when he is portraying musicians, artists and drug-dealers; it would be so easy to fall into familiar tropes. One of the strongest elements is the dialogue. It feels authentic and fluid. Kids ‘crack up’ and conversations are filled with banter and insults – ‘shut up’ and ‘fuck up’ slung back and forth. The only time this wavers is with the characters on the periphery. It’s not their story, but we never really get far enough into the personalities of two local dealers, Jamil and Skam, to understand what makes them tick.

Iceland is a strong presentation of the struggle to make art along with the need to ‘get by’ while living in the city. For Hamish this means the dealing and WINZ visits, while working on graffiti art with Rapley for their upcoming shows. Meanwhile, Zlata is writing and recording songs outside her office job, and then hits the road on a tour. One of the main differences between Hamish and Zlata is that Zlata is still connected with her family, and in that sense still has a safety net to fall back on and the resources to leave or change course if she wants to. This is a luxury not afforded to Hamish: if something goes wrong for him there is nowhere he can retreat to. The actual creation of their art seems to come easily enough for both characters. These sections would have been stronger with a little more nuance – a few more hiccups in the process or more focus on how these characters actually make a song or artwork would have been interesting. The struggle most often comes with the practicalities of getting your art out into the world and this is handled well and feels believable. Hoey presents the exhausting realities of having to be a public personality when that doesn’t necessarily come naturally: the obligations of taking part in interviews and opening nights, or the catch of simultaneously needing a record label yet wanting to retain artistic independence and avoid a terrible deal. Chasing the dream doesn’t really work out for either character. Although it’s unclear what will happen for Hamish and his art in the future, Zlata continues with her songwriting but in the end is doing it for personal fulfillment, not in the pursuit of external recognition.

In this tale of disappointment, Iceland is a political commentary – a presentation of particular facets of New Zealand in the working classes and in the artistic world; of the characters’ battles against the systems that hold them down; and of how ugly capitalism can be. It’s clear that Hoey wanted to capture much of what has been lost in Grey Lynn, originally an energetic hub for creative types. (Hoey referred to it as a ‘sterile’ place now, in a recent interview with Vice.) Yet Iceland is not a rallying call to arms. Although the book exposes a good deal about how New Zealand treats its most vulnerable, and much that we should want to change, Hoey doesn’t attempt to provide answers on how to achieve this. Of course it’s not his job to do so. What he does offer is a fresh perspective on and justification for why people might make certain choices. He presents their motivations for us to consider, and perhaps a chance to reflect on some of our own views and biases.

Iceland is an enjoyable read that flows well – a solid debut providing a glimpse into a very particular time and place that also, despite its title, happens to be a uniquely New Zealand one.

LOUISE WALLACE is the author of three collections of poetry published by Victoria University Press, the most recent being Bad Things (2017). She was the Robert Burns Fellow at the University of Otago in 2015 and is the founder and editor of Starling, an online journal publishing work by New Zealand writers under 25 years of age.