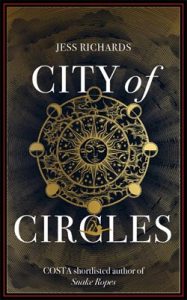 Halfway through City of Circles I was struck by a personal response, phrased in a way I had never previously articulated. The story made me think about how difficult it is to love with a broken heart, but also to wonder, is it possible to truly love without one? Later in the book our protagonist, Danu, has an encounter with a strange couple who share their hallucinogens with her. Before parting the next morning, the woman tells Danu:

You need to get in touch with your heart. The heart you’re denying when you’re so out of it you tell strangers you can’t love anyone … Can I speak to you as an unwanted friend? Last night you spoke of love in ways which made me realise I’ve never felt it.

Danu’s story starts with a broken heart. In fact, I can’t recall a sadder beginning to a novel. Richards opens with the death of Danu’s parents, not in retrospect, but in the present tense. Her parents, circus performers, have contracted an illness that is sweeping through the troupe. Her father has recently succumbed, and we witness the passing of her mother. The scene is tenderly written, not as a manipulative ploy to elicit cheap empathy for the young girl. We feel the empathy sincerely and we develop trust in a writer about to take us deeper into Danu’s grief and the effects it has on her, particularly in her openness to love.

It is difficult to tell how old Danu is. City of Circles is speculative in more ways than genre. Richards does not assign last names to many characters or embed her mobile circus performers in locations recognisable from our world. We move with the caravans through towns called Clattering and Bellclan. The towns’ details are deliberately indistinct. Danu knows the townsfolk as ‘flatties’, some of whom she visits as, in her grief, she explores various nocturnal party scenes. Our orphan is minded by Mag and Sandy, two performers who warn her of some dangers but otherwise allow her to roam. The vaguely wild settings and loose caregiving emphasise Danu’s vulnerability to us and, after a rough encounter with a sexually aggressive flattie, we are pleased to see her abandon her excursions. It’s a profound moment for Danu – seeing the ‘monster’ side of the man manifest itself, frightening her enough to not only remain with the caravans, but also to shelter her heart that much more.

Instead, Danu finds new companionship and purpose with the tightrope walker, Morrie, beginning one of the most unique relationships I’ve read anywhere. Together they develop new routines in the form of tableaux, Danu composing the storylines and accompanying song lyrics. Each tableau follows the formulae of love affairs between two disparate creatures. They are speculative scenarios: what if a moth fell in love with a donkey (‘a tragic love between two creatures who can never lie together without the annihilation of one and the grief of the other’); or a fox with a herring gull. This seems a playful exploration for Danu to address the workings of her own heart and the chemistry between her and Morrie. Richards cleverly portrays a mature artistry in Danu while revealing her childlike perception of love and attraction and their associated perils. However, the chemistry of the performers is stronger on the high wire than in the caravan, the enormous trust they develop not translating immediately into romance. While Morrie and Danu share a caravan, Danu sleeps on a mattress on the floor. The closer she gets to him, and despite his charm and gentleness, the more certain she is that his own monster side will manifest. She’s not completely wrong to feel this way. If not a monster, Morrie’s love for Danu is not wholly pure.

The city in City of Circles is Matryoshka. The leader of the troupe stations the caravans there when a need for income presses. Matryoshka is the city of Danu’s birth, the home of her parents, and it is here that she will search for healing. In contrast to the towns, Richards establishes this new setting in rich detail. Her writing reminds me of Anna Smaill’s The Chimes. It is lyrical and sensual, at times dense with wordplay and mythologising. Whereas Smaill’s alternative version of London is filled with sound-rich vocabulary, Richards expounds on the scents of Matryoshka:

After the subsequent night’s performance, the scents of spices beckon Danu away from the circus. Chasing a narrowing aroma of aniseed, she walks along side streets. The scent of cardamom lingers in the narrowest alleyways, while black pepper lurks in the twitterns and allspice creeps through the small squares. There’s a heady mixture of cumin, garam masala and nutmeg whenever she nears the hubbub of the main street.

When the caravan leaves the city Danu remains, inspired by a clue revealed in her mother’s locket. It’s a simple but compelling device allowing us to explore Matryoshka with Danu. Through ‘The Story of the Moons’, and other highly imaginative myths inserted perfectly into Danu’s narrative, we learn more about this mysterious metropolis. The city of circles is engineered in three sections, like a Russian doll, the outer layer dominated by travellers, markets and circus performers; the second by academies and temples; and the third, the innermost, harbouring a secretive society. What’s more the circles move, imperceptibly, but enough to shift gates between the sections from day to day.

Along with the introduction of the city, Richards makes two dramatic changes to her narrative. After the separation of Danu from the caravan, she begins to include a narrative perspective from Morrie and even a perspective from the abandoned house Danu has claimed as her temporary home. I didn’t expect this change, though it is necessitated by the separation of the lovers and Danu’s new affection for the city. The house narrative offers a unique birds-eye view of Danu and embeds personality in Matryoshka. There, Richards continues to explore the theme of loving with a broken heart:

She picks up reels of yellow thread from the table and doesn’t remember where she bought them. There are tin cans on the draining board. Dirty dishes soaking in the sink. Stained cardboard is stacked beside the back door. There is nothing of comfort in this house. Why is the heart of a home supposed to be a kitchen, when the kitchen is the dirtiest place?

Along with the additional perspectives, Richards introduces ‘the ether’, an energy field of sorts described in both scientific and spiritual terms, through which some have mastered travel akin to astral projection. I found this a bit jarring, but my trust in Richards’ writing helped me overcome that. I returned to the opening pages of the book to spy any foreshadowing of this element of her world-building:

Dying faces are the colour of soiled linen. It’s the eyes that shine, as if the world around the person who is dying has brightened itself, so it’s fully seen and felt and known. Colours, light, emotion, air, wind, sound – all of these things have no edges. They flood into the eyes, filing them, filling them, filling them, before the eyelids eventually close.

These words open the scene of Danu’s parents’ deaths, but also induct us into Richards’ themes of blurred realities, into an element of reality not discerned by our eyes, but which still exists in relation to our sensory world. So … fair play. And the ether earns its role, not only as a fantastical element of speculative fiction, but as an extension of the themes of love and identity. Morrie is learning how to use it in conjunction with his attempts to refine his feelings for Danu:

His mam had said, ‘You can be with anyone you love, but, my, it stretches you thin at first.’

Morrie’s attempts to reunite with Danu drives the remainder of the plot as much as Danu’s search for answers led by the contents of her locket. The ending is written beautifully if not altogether conclusively, harkening back to the tightrope tableaux and challenging our notions of romance, our own feelings for the characters, and what we would wish for them and why.

Jess Richards is a new New Zealand writer, recently relocated here from Scotland. She arrives on our shores with an impressive portfolio. Her first novel, Snake Ropes, was shortlisted for the 2012 Costa Awards, Green Carnation Prize and the Scottish Book Awards. She followed this with Cooking with Bones, also published by Sceptre. The Guardian described Snake Ropes as ‘an extended meditation on trauma and healing’, and The Independent acclaimed her ‘fertile imagination and her direct style’. All this and more can be said of City of Circles. It is a wonderful example of telling a story that is not complex in plot, or overwhelming with numbers of characters, but which offers a highly imaginative and poetic inquiry into the mysteries of the heart, of relationships, and of the motivations of the soul.

ANTONY MILLEN is a writer and teacher in Taumarunui. He is the author of three novels and has had short stories published in Landfall, Headland and Antipodes. He blogs at antonymillen.com.