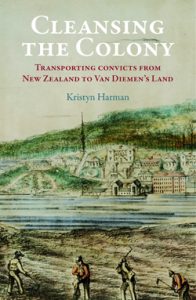 Borders, even if marked by walls, such as those in China, Berlin and the increasingly unlikely US–Mexico fence, are seldom impermeable. Certainly, upon close examination, national myths of containment or purity tend to be, if not actually spurious, then rather more nuanced and complex than propaganda would permit. One of these myths, and a persistent one too, is the exceptionalism of New Zealand being free from the convict taint that blights Australia.

The convict system has historically been used to berate Australians. Certainly it amounted to slavery, even when punitive justice was superseded by supposedly humane reforms, such as Bentham’s Panopticon prison, where enforced silence and separation arguably caused more mental disorders than moral reformation. At best, though, transportation could give the poor and unwanted a second chance in a new country. Many – the recidivists or the irrevocably damaged apart – lived longer and prospered better than they would have had they remained in England. In remaking their lives, emancipated ex-convicts often revised their origins, claming free-settler status or even erasing their names. It is only recently that these involuntary colonists have been viewed on their own merits – as tough and resourceful – and without the accompanying moral judgement.

Even in the nineteenth century convictism had shades of grey, with juvenile prisoners from Parkhurst and Pentonville exiled with conditional pardons upon stepping ashore in the Antipodes. They may have had useful vocational training but the penal taint made them undesirable immigrants.

On the Australian continent the proudly convict-free state of South Australia was quite unable to stop emancipists arriving, with nary a hint of nefarious origins. Some years ago I researched a newspaper hand-written from a prison vessel transporting Pentonvillians. The document was held in the collection of a prominent Adelaide newspaper family – they could not explain how, being indubitably free settlers. Crossing the Tasman was harder than crossing a land border, but ships were plentiful, and the seven Austral colonies had a healthy passenger trade.

Matthew Wright’s Convicts (2012) was a valuable examination of the many pre-Treaty Pākehā with emancipist origins. More would have arrived during the goldrush, such as the Maungatapu murderers. New Zealand family historians may wryly refer to convicts as ‘Australian royalty’, but such discoveries are hardly confined to Australia.

An intriguing twist on the convict tale is provided by this valuable book, which reveals that New Zealand itself was a penal coloniser, exporting over 100 prisoners to Tasmania. Writer Harman had her eureka moment in the archives, pure gold research, for this traffic had been quite forgotten. It was, in retrospect embarrassing, particularly as some of those so rudely exported were Māori. Harman is well suited to evaluate this raw and sensational data, having previously written on mainland Aboriginal convicts sent to Tasmania. Indeed, the convict records are so extensive they have been added to the UNESCO Memory of the World register. In examining these Australian documents, a significant snapshot of 1840s–1850s New Zealand is revealed.

New Zealand may have had emancipist settlers, but it was another matter to export criminals directly from the home country. When shiploads of young offenders from Parkhurst prison arrived in Auckland they were decidedly unwanted. Something of a moral panic ensued, and rather than dealing with the inevitable villains locally, England was emulated and the problematic citizens exported to Tasmania.

It was not a huge distance, but nonetheless it was a major step in the criminal code. That it was short-lived provides Harman with a series of case histories, suitable for a monograph. The men, and a lone woman, were transported for a variety of offences. The first, William Phelps Pickering, had been a free settler to Australia, and experienced his first imprisonment in a debtor’s prison. After crossing the Tasman he ventured into white-collar crime, fraud and misrepresentation, earning a seven-year sentence. However, he was intelligent and knew how to work the system as a ‘dog’: he informed on a plot to kill a gaoler. It could have got him killed by his cellmates. That act, and a petition for pardon from New Zealand, saw his sentence reduced. He returned to the North Island and became a wealthy businessman and a landowner.

Pickering was atypical. Those sent to Van Diemen’s land with him, the initial trans-Tasman transportees, were working-class, tending to petty thievery. Some had already suffered transportation. One, John Coghlan, claimed never to have been flogged, but scars on his body told a different story. If the men tried to abscond they suffered further penalties including being relegated to the harshest penal settlements, such as Port Arthur. Several died trying to escape; the rest tended to obscure, poverty-stricken deaths.

A majority of those transported from New Zealand were soldiers, the guardians of Imperial privilege, from guarding convicts to suppressing the indigenes. They may have been agents of order but this did not prevent them from disorderly behaviour themselves. Insubordination was punished severely. Harman identifies 51 cases of soldiers being transported, most of them young men whose offences ranged from desertion to petty crime to rape. Had they not enlisted they might have been transported anyway, not being so very different from their fellow inmates, whom once they might have policed.

One of the strengths of this book is Harman’s ability to compare and contrast between the treatment of indigenous people in Tasmania and New Zealand. Tasmania suffered a near-genocide, and elsewhere in Australia some 90 Aboriginals were punished within the convict system, often dying before release. Yet when a small group of Māori was transported from New Zealand, their treatment was starkly different. They arrived in Hobart wearing traditional dress, which drew a curious crowd to their disembarkation. The five were interviewed by a Hobart newspaper, where they proclaimed their status as fighters of the frontier; they also sat for local artists. They received privileges, were kept apart from other convicts for fear of corruption, and were sent to an island probation station. Already they had the status of ‘Ticket of Leave’, the penultimate stage before emancipation, for the authorities were under pressure to show leniency.

Most Vandemonians were sympathetic to their plight, regarding the Māori as a superior class of ‘natives’. Nobody mentioned Tasmanian Aboriginals Tunnerminnerwait and Maulboyheener, exported to Victoria for hanging, the first in that colony. Instead it was openly voiced that these Māori had been treated unjustly. When convict Hohepa Te Umoroa died of natural causes he was honoured with a headstone. The remainder received pardons, and were returned across the Tasman.

In contrast to the stories of Pickering and the Māori was the case of the one woman sent from New Zealand to Tasmania: Margaret Reardon. She was convicted for involvement in a triple murder initially blamed on local Māori. The actual killer was Reardon’s common-law spouse, against whom she informed after an incident of domestic violence. The case was singularly murky – stories changed – but she was likely an accessory, and therefore at risk of the noose. Instead, a perjury conviction saw her separated from her two young sons and sent to Tasmania. At the Female Factory she served two stints of hard labour for minor offences, and married a ‘free man’ while still under sentence. Although not supposed to leave Tasmania, she followed her husband to the Victorian goldrushes. She died an aged widow in 1890, and may never have seen her New Zealand children again. She had given their names to her twin sons, born in Tasmania, but both these babies died.

New Zealand’s experiment in colonial transportation was brief – a decade long – and soon abandoned. Tasmania was tired of transportation. As this book shows, the incident was significant. A land of Free Settlers (a term also applied to South Australia) could not tolerate deviances from its utopian ideal, and the response was, to use Harman’s term, brutal. It represented a fear of moral contagion still present in some of the worst current discourse on refugees. It was also unequal. The treatment of the transportees varied widely, depending upon factors of class and race. ‘Most dismal is our doom upon Van Diemen’s shore’ is a line from a surviving convict ballad, and for most it was. It is considerably to Harman’s credit that she has done her subjects justice, in print, when the actual justice they received was at worst dubious, if not inhumane.