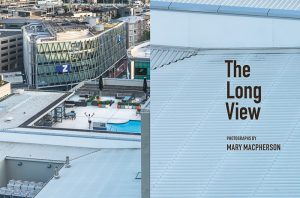 Designated as PhotoForum 89. Published to accompany the exhibition of the same name at Pah Homestead, TSB Bank Wallace Arts Centre, Auckland, 29 May to 22 July 2018 as part of the Auckland Festival of Photography.

The camera is an instrument that teaches people how to see without a camera.

Dorothea Lange’s famous quote comes to mind as I open the pages of Mary Macpherson’s new photographic book, The Long View: Auckland photographs 2014–2017.1 Modestly sized, it presents 25 superbly coloured photographs of the city, and an essay by Gregory O’Brien.

I am particularly taken with Macpherson’s project. It shows her characteristic care for a photograph’s visual synchronicities, as did her last project with which she traversed the entire country in search of uncommon moments of the history of an Old New World. But here, it is a contemporary Pacific Rim city that occupies my vision, as an entity of the photographer’s making-in-the-world. And for me it becomes part of a photographic history of ‘the city’ as gathered through the lens and the photobook over decades of photographers on the road and walking the street. From Walker Evans, Fred Herzog and Robert Frank to the ‘New Colour Photography’ of Stephen Shore, Gary Blackman’s Built in Dunedin2 and Macpherson’s Long View, we find a particular city framed over a course of years, with close attention to its moment as we might personally seek, and see it, on our feet.

In its many enmeshed details the city opens, like a constant puzzle of inhabitation and expansion. Macpherson’s work is a project of curious engagement with what we know to be the unstoppable, burgeoning contemporary city. Always in the process of visualisation, right from her very first image her city is the subject of our questions: of what a city is and what it might become, and what our experience of it might be. A man is on a hilltop standing, unusually, on top of a circular concrete lookout that presents, portolano-style, the surrounding land and sea. With his feet together, legs straight, hands at his sides, he is looking out to the distance, like a scout propped there by our own curiosity. Yet his figure is cropped at his elbow height by the frame. So he is, for me, the embodiment of an enquiry and its long view that (at once unlike, yet also following, the mapmakers) forms something of the contemporary city. Behind him, a blur of red, white and silver roofs follows a road to hazy city towers and the ever-present sea.

Turning the page to the next photograph takes us to the heart of the high-rise city. It is an image with its foreground centred on an old, yet made-over two-storey brick building, hyper-lit by sunlight. Emblazoned in a stack of boarded strips of red and gold signage, it is the ‘GOLD*HOUSE’ with its ‘24 HOUR LOANS AT 5% INTEREST; BUYING SELLING AND LOANING’. It is sandwiched between the gridded façades of two tall buildings, sitting narrow like Walker Evans’ 1934 License Photo Studio, which also carried its patterning of text.3 As the slice above it opens, ascending layers of variously clad buildings lead us to the background in which a roofline logo sits, centrally yet compositionally clipped. So we have Macpherson’s curious frame on relations of textures, and of text to yet more text. Off to the left, and part of the puzzle, a woman sits on her deckchair, perched on her apartment’s terrace, also hyper-lit. Catching the sun, she tips herself back, strapless at the shoulder, her arm flung up as her hand rests, light-kissed, on the balcony’s rail.

And then, only four pages in, Macpherson catches me in her net of visual relations, cues and clues with particular success. It’s a busy city intersection, as I can tell from the green spot-lit man in the crosswalk lamp that juts from the vertical pole not far from the right-hand side of the frame, and the man who hurries towards it, his apron askew. But to the left, and for most of the image, the photograph cuts a slice through the differently textured buildings of a construction site (being used as a parking lot), meeting with the everyday. Over this horizontal slice there’s the layering of different forms of graffiti, a draped and collapsing billboard skin of text on its side, and the awning and advertising board of the bar operating beside it all on the street. Behind this, there’s a massive advertising billboard almost centred among the surrounding verticals of glass-fronted buildings, and, opening above the crosswalk, a patch of cloud-smeared sky. It’s a tour de force of an image that condenses a textural and textualised cross-section of the city, as if in an archaeological latticework of its teeming urban life.

Indeed throughout, Macpherson’s visual intelligence carries us in and out and through each photograph that comprises its juxtapositions, rebus- and Rubik-like. Gathering in its text, and its kind of intertextuality that criss-crosses the surface of the city, is my memory of Evans’ success not only in his License Photo Studio but also in his Polaroids of the 1970s that play repeatedly with the clipping of text.4 Gathering also, is my memory of the horizontal and vertical set of visual relations for which Stephen Shore’s Beverly Boulevard and La Brea Avenue (1975) has become famous: of the poles and signs that criss-cross the image of a gas station at the intersection of two roads in Los Angeles.5 And here, the urban exists in Macpherson’s complex frame-world within which the viewer is continually ‘filling the pictures with attention’ (Shore), from one occurrence of sight to the next, and the next.6

But Macpherson also subtly makes the multifaceted into a scene of many perspectives. Sometimes seeing the city in its multi-planar grids of glass, she expands our perception of its space, in proliferate angles, rotations, repetitions and depths of field. One example is in her central image, where we see the city from above, down the wide ‘main street’ and, inevitably it seems, to the harbour. Mid-foreground, one of the two glass high-rises that stand as the photograph’s subject, multiplies itself by reflecting the buildings across the street onto its own (diagonally bisected, yet reflectively complete) lower-level roof terrace. Our view of the next steps us down to the city’s edge, into its cluttered office interior, and into its reflective flank that stacks small boats and a superyacht just beyond the frame. Bringing home, then, the expanding city’s link with the super-connecting sea.

Hyper-present in Macpherson’s photographs is the kind of urban location that exists not only in a local vernacular but also as a phenomenon of the ‘technological civilisation’ of an entire country. It’s something that photography historian Clément Cheroux has noted of Evans, drawing on the ideas of American scholar John Atlee Kouwenhoven.7 It is, as with Evans, a vernacular culture that is always collapsing into what it is always becoming, at its osmotic edge of production. For, the burgeoning city of Auckland in these photographs, is—as if representative of the character and claims of New Zealand as a whole—the nation’s city the most in flux, at the edge of the world’s largest ocean. It is the city always in flux with what it is tumbling into and what we might make of it for ourselves, into the future.

Even though the scholarly field of the photobook is nascent and a definition undecided,8 The Long View qualifies to be recognised as one. It is characterised by its artistically singular presentation of a sequence of photographs. And it continues the long relationship that the photobook has had with the city, as its form so well suits the act of traversing, and continuing, moment by moment, the time and space of the city itself.9 My sense of this photobook does falter, however, with the closing essay, which I find restrictive of Macpherson’s project. This is possibly a result of its exhibition catalogue style, which is unlikely to offer the same scope for the more creative rhetorical strategies that expand across photobooks today.10 But it is also a result of content, as Gregory O’Brien responds to the city as a blighted human project that alienates us and eclipses our own ideas of community and wellbeing. Yet Macpherson’s project, as the writer himself says, is open to being puzzled over in a more positive light, and embraces something of the energy of a city in flux.

For me, Macpherson’s photographs bring to the surface something of the contemporary city as it has recently been described by human geographer Tim Cresswell, for example. In their dense criss-cross of detail, they are a place of gathering that constantly weaves relations between its inside and its outside. So, they carry their texture, or patterning, of a given moment within their special ‘holding action’.11 And further, in their openness to experience on the street, they carry what spatial field researcher Fabian Neuhaus has discovered to be the special nature of people’s two-way relationship with the city, so that our daily lives are formed not only by the shape of the city but also by the way we move in, and upon, it.12

Macpherson’s own special sense of the city is embodied in the image repeated on the photobook’s back cover. It is the city in which our eye zooms down to the small figure of a man on top of a swimming-pooled roof, raising dumbbells upward with straight arms, performing shoulder-flies as if they are some sort of personal celebratory salute, while he is surrounded by a large urban patchwork of roofs, built façades and roadways. It shows a place in which we can, and should, ask ourselves far-reaching questions about what cities are and what they might become, but it is also one in which we can see ourselves, not as eclipsed, but as a part of it.

JODIE DALGLEISH is a writer, curator and sonic artist living in Luxembourg. She is returning to her own practice after over a decade curating within New Zealand’s Art Museum sector. She has been published online and in print in numerous arts-related publications internationally.