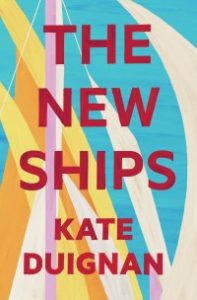 Seventeen years after her highly praised debut novel Breakwater, Kate Duignan’s second novel, The New Ships, explores very different territory. Peter Collie is a model of reliability and responsibility, a Wellington lawyer in his late forties, financially stable, cautious and dependable. As a young man he once dismantled great ships piece by piece, but as the story begins it is Peter who is being pulled apart. His wife Moira has recently died, his grown son Aaron has absented himself, and Peter’s career and reputation are spiralling downwards. As the three epigraph poems suggest, paternity and grief are present from the first page of Chapter One. But Peter also revisits his past. Abigail, the baby daughter he lost, and Geneviève, the woman he once loved and abandoned, both haunt his thoughts. In addition, Peter uncovers a secret that, within this place of grief and loss, forces him to question his marriage, his life and his sense of self. Set mainly in New Zealand, but with action that navigates India and Pakistan, the UK and Europe, The New Ships is the story of Peter’s re-examination of his actions—or inactions—and of what it is to be a father, husband and son.

Duignan completed her doctorate on first-person narrative and her expertise is apparent in her careful management of timing and detail. Peter’s voice is constant and methodical; nevertheless we are absorbed by his efforts to interpret, analyse and re-examine his life. It is a shock for Peter to discover his family have secrets. The way he approaches these involves a mixture of emotion and lawyerly reason: ‘It is human nature to look for patterns, to hold to the idea that behaviour has a logic.’ Duignan allows us enough subtle distance to gradually filter those things Peter tells himself to find what he will admit. There are the questions he asks, and those he clearly should have asked and didn’t. There is a mystery around the death of his first child, and his apparent apathy about this is at first perplexing. Later, we realise the extent of his denial about past actions and the regret he is now forced to confront. How long can a man prolong his excuse of good intention?

This choice of narrative technique allows Duignan to delicately write the ebb and flow of private grieving. At times Peter is so overwhelmed by pain he acts without restraint. At other times he is dissociated from experience, his grief apparent in measured descriptions of the mundane—going to the toilet, making coffee, eating (‘Around four, I ate a meal’)—and of the profound (‘Crying felt clean in the days before she died.’) Late at night, immobilised on his parents’ floor to the sound of Mozart’s Requiem, his wife’s favourite, Peter calmly tells us: ‘My parents’ carpet, when you lie on it, with your head hard up against the speaker, smells of cat piss.’

The New Ships explores the effects of revelation on memory. What has gone before is irreversible but still accessible. A person can return to memories and overlay them with hindsight. I don’t wish to spoil the plot, but one example is the holiday home that was a significant part of Collie family life. Early on Peter decides to sell it, creating more friction between himself and Aaron, but in proceeding with the sale he discovers that the bach, like his marriage, has secrets. The questions that grow as the story progresses are: Does it matter? Does it make a difference to the family, their memories together? What does it change?

People say parenthood is a job, but being a parent is both a thing you do and a thing you are. Aaron is grown now and living overseas, yet more than ever Peter remains on constant vigilance, returning often in his mind to the times Aaron went missing as a child, the anxiety he felt, and the urge to apportion blame. But Peter is also grieving a simpler time when his position as father was simple and certain. Now it is tenuous, the boundaries blurred. Once Peter was the steady provider, but now Aaron is grown up and has his own life. He has his secrets. He makes mistakes Peter cannot fix with words or money; his fatherly advice, love and physical presence are apparently no longer sought or required. Now it is Peter who needs reassurance and comfort. At the same time his sense of his own role as son has shifted. His parents are too frail to attend his wife’s funeral. Nowadays, he must care for them, yet he still feels that childish blend of love and irritation: ‘Bloody Dad and his bloody instinct for getting to the bloody heart.’ The New Ships asks how long do you remain a parent? When do you stop being a child?

Peter’s inner world parallels world events, for what is now can only be created on the back of what has gone before. Moira dies just after the 9/11 bombing of the twin towers in New York, and while Peter grieves his wife and worries about his son, the world reverberates with catastrophe. There is political unrest, tension between countries and cultures, and political activism both locally and abroad. Refugees are fleeing across the Indian subcontinent. But Peter’s once ordered life is also a scene of destruction. With the loss of Moira and the secret he discovers it is like a bomb dropping on his life, compounded by errors in the workplace, his son absent in a literal and emotional war zone, and his own decision to ‘Burn a bridge, cross a Rubicon. Set fire to things. Join the Angry Brigade, throw a bomb.’

Each character in The New Ships is believable and recognisable, in fact often deceptively commonplace. Peter himself could be any middle-aged businessman, but Duignan’s choice of a character who at first appears as grey as his suit is a point of interest. Beneath the corporate uniform is a man with a back-story and complex inner world. Without his suit of reputation and acquired titles, who is the man? Peter’s son Aaron, an aspiring actor, has enormous emotional issues to reconcile. Moira’s paintings enabled her to take a subject and strip it bare, but Peter’s wife remains for him an enigma; as Aaron tells his father, ‘You didn’t really get Moira at all.’ We learn of Moira’s complexity through Peter’s mixture of grief, betrayal, anger, frustration and ultimately love.

Supposedly minor characters such as the new female junior at the firm and her impulsive boyfriend, or the family in Pakistan whom we encounter only through phone conversations, are well crafted, and contribute significant story threads that help drive the narrative. There is no wastage.

Ships, boats and the sea permeate the story; repeatedly Peter returns to the memory of his younger years living on a boat, working at a yard in Amsterdam dismantling old ships, a sailing experience that had profound and negative effects on him, an encounter with a boat owner and purchase of the yacht Cronus, and a visiting warship, among others. The job in the yard foreshadows his future:

Lumbering out of the dusk, the wreck was stubbornly there. There were new gaps in the hull, and the line of the bridge had visibly lowered. But the prow was ship, still ship. It held its shape against the air, defying the work of the day.

Art, music and literature are another constant, such as the way every year Peter’s son gives him music, how Peter plays his wife’s beloved Requiem, and the frequent reference to classical stories such as the tale of Orpheus. Beneath the present day, the memories, and Peter’s attempts to make sense of both, flows the ancient love story of Daphnis and Chloe, as depicted by Chagall’s paintings, work that became a famous, beautifully illustrated book. A youthful Peter discovered and purchased the book in Amsterdam. He often returns to the story, Chagall’s life and the paintings, fascinated by how the artist chooses particular details and colours, dwelling on the characters themselves with a kind of intimacy.

If you are wanting a racy page turner this is not the book for you. Duignan has crafted a story that reads like music, like a requiem. Although the novel’s epigraphs signal paternity and grief, the vibrant cover art by Keely O’Shannessy implies brighter subjects: hope, looking ahead for what might sail in. The story examines how we all strive to navigate change, gazing at the horizon with hope and longing for what might appear—or reappear. The New Ships is a complex yet readable story about the choices and regrets that define us, about family ties and the intricacies of love.

HARLEY HERN has published fiction and nonfiction in numerous journals and anthologies including Flash Frontier, Hot Ink (Steele Roberts) and [your name here] (Massey UP). She has an MA in Creative Writing (Auckland) and is administrator for the Academy of New Zealand Literature, administrator for National Poetry Day, and senior editor for Geometry journal.