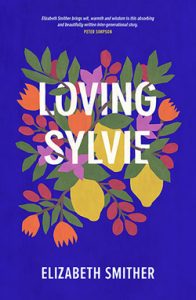 ‘She loved what others didn’t. Things aslant and odd, glimpsed from the corner of her eye.’ – Isobel in Loving Sylvie

Elizabeth Smither has published eighteen poetry collections, five novels and five short story collections along with memoirs and journals. In 2004 she received an honorary Doctorate in Literature from the University of Auckland, and in 2008 was awarded the Prime Minister’s Award for Literary Achievements in Poetry. Her most recent collection, Night Horse, won the Ockham New Zealand Book Award for Poetry. Her poems deliver an appealing mix of thought, feeling, economy and detail. I have found her fiction equally captivating: imbued with insight, layers, stillness and, conversely, intense movement.

Loving Sylvie is, as the title suggests, all about love: about being loved, not being loved, being capable of love. Sylvie gets married in the opening pages, and the first sentence foreshadows the cinematic qualities and melodious writing to come: ‘On the morning of her wedding, Sylvie Lehmann was rowed across a lake.’ Sylvie’s grandfather Kit rows her to a small wedding party that includes her grandmother Isobel. Her mother Madeleine, who has been absent most of her life, does not make the occasion. Her stepmother Cora also doesn’t attend the wedding because she is brimming with resentment and coldness towards Sylvie.

I love the way the effect of a novel can gradually rise in you like the slow fermentation process in kombucha. Smither’s novel moves unhurriedly, exquisitely so, accruing sharp visual images and everyday detail. She builds portraits of three women (four if you count Cora) through gradual revelations. Yet as much as the novel is an accretion it peels back to the hollow, the missing bits, the ache, the underneath. Here I am talking about an emptiness of self as much as I am referring to the material Smither withholds. This movement between hollow and presence contributes so beautifully to the primacy of character in the novel.

I want to share Grandmother Isobel with you. She is ill, her aging body renders her limbs powerless, but worse still, she feels powerless to intervene and influence Sylvie, to keep her safe and ward off danger: ‘The times in her life when she had not taken action were the times of the greatest suffering.’ Her grandmother role, which by default is also that of a surrogate mother, never ceases. Isobel fascinates me; she is both vulnerable and strong, she craves adventure, and she understands the ability of books to feed heart and mind, and to influence how we see and how we inhabit the world.

Through Isobel we get glimpses of Smither’s life as a prodigious reader. I love the scene where Isobel embarks upon a yearly ritual: the cleaning of her bookshelves serves to banish dust, to re-enter beloved narratives and to bring moments from the past closer. She wonders whether to reorder the books as though reordering her predilections and past:

She had imagined the task would refresh her but the opposite was true because each author had brought back memories of herself. The naïve enthusiasm with which her sixteen-year-old-self had read André Gide, feeling if she saw him in a coffee shop she would be propelled to his side. She saw now that she had recognised her innocence and wanted to despoil it, not in the real world but through the safety of a book.

Books – and for me this is a gold vein in the narrative – make various appearances throughout the novel. Isobel has fed both her daughter and granddaughter a diet of books, little ‘lessons’ that were so often ignored but occasionally took root like slow-release teachings. I am led to ponder the way we inhabit the narratives that we read and the way those narratives embed deep inside us. Herein lies the complexity of Smither. Yes, this a novel of significant human relations, of relations between the women in a family in particular, but it is also a novel engaging with the sovereignty of reading and writing. Isobel is overcome by ‘the labour’ of writers as much as she re-treads avenues of self that books have laid down.

In fact I am drawn to all the women: to the way you can view Sylvie in shifting lights when you view her through Isobel or Madeleine. As a child, Sylvie deliberately fractured her arm so she could wear a plaster covered in fairies and horses. She had not counted on the pain. As an adult there are distances and discomforts, vestiges of the turbulent years, the school expulsions and schoolbags flung against walls, the mother she wants to avoid at all costs. However, alongside the fractures and pain is her love of art, perhaps standing in for the fairies and horses, and most importantly her grandfather Kit, the steady anchor, a buffer against rages and emptiness.

Sylvie is an intense cipher written in the codes of love. How is she loved? Whom does she love? How does she love the women, her grandfather and her husband Ben? She lines up fruit that her landlord greengrocer has given her along the windowsill, each gift the possibility of nourishment and self-care. She regularly walks Mr Arlington’s dog Lovejoy and acquires a surprising inheritance. The dog becomes infinitely precious. There is a scene near the end of the book that resonates so profoundly. Sylvie attends her grandmother’s funeral in defiant red. Later she is standing in her bedroom when her husband Ben joins her. I weep at this scene and Smither’s ability to make the most intense moment physical, yet also intangible and empathetic, all in one narrative breath:

The dress presented a problem: its zip descended further than Sylvie’s hand could reach, however much she craned and twisted her back. Ben held her still, and the red dress slid from her or she slid from the red dress. And then Isobel was enfolded in it, a whole life of joys and disappointments, loss and longing, that could hardly be contained in a human frame. In one as frail as Sylvie Lehmann it was impossible. But to compensate she seemed to take something from the air around her, immediate things, like an aura, that her body touched. An exchange was taking place. She drew the energy she needed into her and bestowed it, so the process could continue, with him. He hesitated at first and then, whatever the cause – he knew he should not enquire – he joined her.

Loving Sylvie is an exquisite, heart-activating read. It draws you in close to maternal relationships, from Madeleine’s yearnings and epiphanies to Sylvie’s own disappointments and joys. It catapults you into how novels matter. The writing is euphonious, restrained and utterly revealing. Each character is scripted in chiaroscuro, the light and dark flickering as the women come into mesmerising view. Smither is one of my much-admired literary elders; I salute her ability to make narrative humane and to make me feel the world.

PAULA GREEN is an anthologist, reviewer, children’s author and poet with a doctorate in Italian women’s fiction. She has published 15 books including three recent arrivals: The Track, Groovy Fish and other poems and Wild Honey: Reading New Zealand women’s poetry. In 2018 she received the Prime Minister’s Award for Poetry and was made a Member of the NZ Order of Merit for Services to Poetry and Literature. She runs the blog NZ Poetry Shelf.