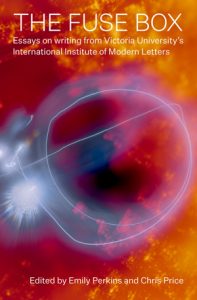 The blurb promises writing strategies and guidance for all stages of writing life from poets, dramatists, novelists and writing teachers, but essentially this is a book about creative survival and a survey of the private processes of storytellers. The essay forms are as eclectic as the subjects they address. There are interviews, poems as essays and poems within essays, chapters that read like manifestos, experimental moments of impact, and the more traditional essay of pages dripping in words. Some pieces feel like a good friend exploring their personal wisdom while others are more academic, detached and contemplative.

Traversing both worlds is ‘Awkward and Golden: On silence in writing’ by Emily Perkins, a clever chimera that revels in the unsaid. Chris Price’s ‘Mouth Music: Some proposals about listening’ presents the space in between – the source or spring from which we draw to create. ‘I don’t write a poem so much as I listen for it,’ Price muses. If you come across The Fuse Box and only have time to read one essay then dear goddess let it be ‘Continuing’ by Elizabeth Knox: ‘Perhaps what I know as a writer – after many novels – is that the one big thing can only appear as a dark place in the sky, discernible because of the otherwise – the myriad visible stars.’

Tina Makereti advocates for the unheard and the unpublished in her essay ‘The Story That Matters’: ‘Where are our immigrant stories? Our stories of poor communities? Our stories of growing communities of street people? Our queer stories?’ Of all the essays in this collection, Makereti’s is the most concerned with the story of New Zealand and the chapters we are missing. In her essay ‘I Go to My Sister-Artists and We Talk’, Tusiata Avia urges Pasifika women creatives to lean on their inner knowledge: ‘There is something deep inside you – you can call it spirit or DNA – that knows. There are all kinds of things you can do to nurture this knowing, to keep this knowing in good company, to grow this knowing.’ Both essays are achingly raw in parts. ‘Discomfort is the companion to having a voice and being given publication,’ writes Makereti. ‘My discomfort sits alongside anything I write that has associated risk.’ She resolves that in fact, pretty much anything worth saying has associated risk, but like Avia – the message is to write regardless.

Stephen Burt’s ‘Controlled Experiments (in Poetry)’ and ‘No Hugging, Some Learning: Writing and personal change’ by Damien Wilkins reward and delight with mercurial twists. ‘Poetry can proceed in all directions,’ writes Burt, ‘like a cladogram or evolutionary tree.’ Writing across decades, hemispheres; discussing Joseph Roth and Dennis McEldowney, Wilkins also wears the hat of teacher: ‘In teaching creative writing it took me a while – longer than it should have – to understand that the question of technique (‘How do I make this book?’) is also a question of value (‘What do I believe about the world?’).’

There are gentler waters for the awkward and anxious: ‘There are some writers for whom it’s easy …’ writes Ashleigh Young. ‘I’m here for the other ones. The mousey ones. The mumblers. The ones who trip up the steps or who notice halfway through speaking that they’ve got a hair stuck in their mouth.’ Victor Roger, Bill Manhire and James Brown all deliver electric compositions. Manhire’s ‘Deepest Blue by Accident’ steadily builds to ‘Red Horse’ – a poem that speaks to the happy accidents of the creative process.

Lloyd Jones discusses the role of playfulness in writing: ‘It’s a lightness in oneself, a sense that anything can go, anything can happen here. Don’t predetermine anything. Be prepared to be surprised by what just sails out of you onto that page and go with it.’ In her essay ‘Thinking from the Middle’, Stella Duffy cites Toni Morrison, Einstein and Maya Angelou as people who have lived with fulltime jobs and very full lives and yet still found time to create: ‘These people are not magic; they are not superhumans. They chose to make work.’

Ken Duncum’s treatment of the interconnectedness between a writer and their writing brings something golden to the book as he ponders the psychology of the rewrite: ‘Where are you in this? How does this character, this story, relate to your life? Because it will, and now is the moment (definitely not in the first draft) to recognise that.’ In ‘What to Write About’ Gary Henderson offers frank and fair advice on writing beyond your own experiences: ‘To try and deny anyone the right to tell any story is censorship of the most repugnant kind – censorship of the imagination … You have the right to tell any story, provided – and this is not a negation – that you establish an authentic connection with your material. It’s a moral obligation you have as a writer. If you don’t do it, you’re a fake.’

In conversation with Briar Grace-Smith, Patricia Grace discusses what has shaped her as a writer: ‘when we were children we were never introduced to writing that was familiar to us in our backgrounds in the country we lived in.’ She goes on to relay discovering the Kiwi voice at teachers’ college when she came across the writing of Frank Sargeson and Katherine Mansfield: ‘I started to realise that I had my own voice too, and that I would like to try that voice out.’

Nina Nawalowalo and Tom McCrory share their journey of touring the intergenerational production The White Guitar and the kaupapa behind their practice. The Write Where You Are collective (Pip Adam, William Brandt, Rajorshi Chakraborti and Gigi Fenster) in conversation with Emily Perkins discuss the important mahi of bringing creative writing to prison communities. ‘I think our classes are tiny drops in the oceans of coping with time,’ Chakraborti ruminates, ‘coping with the way life has turned out for them.’ The book finishes with Hera Lindsay Bird’s ‘Untitled 404’, a cocktail of provocations in response to a Cindy Sherman photo that is reproduced at the back of the book. It’s a perfect ending because it’s really a beginning and turns the pleasure and the work of ideas over to the reader.

It will be a happy coincidence if The Fuse Box converts readers to writers but the messages will reveal themselves best to those already invested in the page. One thing is for sure: if the risk-taking, experimentation and diversity of The Fuse Box is an inclusive movement to be led by the International Institute of Modern Letters, Makereti’s call for stories of the unheard and the unseen may very well be answered.

COURTNEY SINA MEREDITH is the author of Tail of the Taniwha and Brown Girls in Bright Red Lipstick. She has held various international writing residencies including the prestigious Fall Residency at the University of Iowa where she is an Honorary Fellow in Writing. Her first children’s book will be launched in 2018.