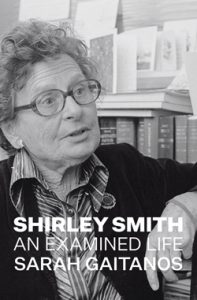 How long does it take to unravel a life? In the case of Shirley Smith, the answer is eight years. That’s how long biographer Sarah Gaitanos spent poring over the vast documentary archive left by the academic, criminal lawyer and social justice campaigner, talking to the people who knew Smith and then compiling her findings into a book. This undertaking was made possible above all by Smith’s own writings, chief among them the countless letters she wrote over her lifetime – from her teenage years at a boarding school in Marton to her travels in retirement. The author describes this output as the manifestation of Smith’s ‘prodigious engagement with the world’, and it wouldn’t be a stretch to suggest that this engagement is the true subject of the book.

First, however, we need to account for what makes Shirley Smith an appropriate candidate for a major biography. The most obvious answer would be to list her achievements and ‘firsts’: co-founder of the Human Rights Organisation and of the National Council for Civil Liberties, of which she was the first life member; first woman to be appointed to a law faculty in New Zealand; long-time national secretary for the Campaign for Nuclear Disarmament; first woman to successfully argue a criminal case in front of a jury in New Zealand; champion of the liberalisation of abortion, of homosexual law reform, of jury rights for women, of mental health reform and of the rights to justice of young Māori and Polynesian men, in particular in her long-time work as a solicitor for Black Power and the Mongrel Mob.

The catalogue is far from exhaustive but also provides us with a partial and ultimately flawed explanation: for all those achievements, that intellectual heroism, contained – like in those ancient myths of which she was so fond – an element of hubris. A hubris not entirely dissimilar, perhaps, to the one she saw in her famous husband, William Ball Sutch, and to which she sometimes privately attributed his very public troubles. Smith once observed, in a letter to her father: ‘one seems to have lived many lives in a lifetime’. But all that living exerted its toll, too, and Gaitanos’ willingness to account for it is what makes this book so compelling and profound.

Shirley Smith made an astonishing contribution to New Zealand public life, and her biography rightly celebrates it. But it does so without indulging in triumphalism or sentimentalism, nor by glossing over the personal costs that making those contributions incurred.

The daughter of lawyer and later Supreme Court judge David Smith, Shirley had the kind of upbringing one might be inclined to call privileged, were it not for the fact that she was orphaned of her mother when she was only three months old. The Smiths were Scots Presbyterians, and she inherited from them an ethos she would carry as much in her private as in her public life. As she herself put it: ‘I believe one must do what appears to be one’s work in the world, and do it with all one’s might, and do whatever one can, however little, against the world’s evils.’ To worry about one’s happiness in the face of such a mission, she continued, would be self-indulgent and ultimately futile.

Yet Smith certainly knew happiness, perhaps at no time more so than in the late 1930s when she was a student of classics at Oxford, had a number of lovers and joined the Communist Party (this also kicked off her life-long and very much one-sided relationship with Special Branch and later the SIS). Her correspondence from this period reveals a liberated woman of exceptional intelligence and spirit, even as she dealt with two bouts of lymph node tuberculosis.

Upon returning to New Zealand in the first months of the war, Smith taught classics first in Wellington, then in Auckland. In between, she met the writer and economist W.B. Sutch. The two of them married in 1944, after his divorce from his first wife Morva was finalised, and moved to Wellington. Here Smith was unable to find work, even at Queen Margaret’s College where she had been a star pupil and whose headmistress she was still close to. As it turned out, a master’s of arts from Oxford University was no qualification when set against the fact that she had married a divorced man.

Life with Bill Sutch wasn’t easy. Smith soon found that his enthusiasm for feminist ideas didn’t extend to how he expected the household to be run or their daughter Helen to be raised. Shirley Smith may have succeeded in keeping her name but she was to be a housewife after all.

The issue of Smith’s career became less urgent when the young family travelled first to London, then to New York – where Sutch was appointed head of the New Zealand mission at the UN and proved instrumental in saving the fledgling UNICEF – but it presented itself anew when they returned to Wellington, just in time to experience the 151-day waterside workers’ lockout of 1951. Against the backdrop of the anti-union laws passed by the National Party, Smith enrolled in a law degree at the age of thirty-five. In doing so, she went against the wishes of both men in her life: her father, who always wanted her to have a career, just not in criminal law (which he regarded as no fit environment for a woman); and her husband, who simply didn’t want her to have a career. Nor did becoming a lawyer relieve Smith of having to carry out the bulk of the housework. She was simply expected to do both things at once, along with fighting the world’s evils. In what is perhaps the wryest line in the book, Smith describes a ‘working evening’ at home in four words: ‘Bill writing I ironing.’

Then came the famous, magnificent house in Brooklyn that the couple commissioned from Ernst Plischke. Then came 1956, and Smith’s repudiation of the Communist Party as Soviet tanks rolled into Budapest. Then came a successful, trail-blazing law practice that didn’t make any money, because Smith worked for too many people who had too little money. And then, too, came 1974 and the trial of Bill Sutch on charges of espionage – a very public matter that would never be settled, not by his acquittal in the High Court nor by the scurrilous insinuations and partial revelations that continued to come in dribs and drabs for decades, each time forcing Smith into a new fight on behalf of her late husband. (Sutch died in 1975, mere months after the conclusion of the trial).

The final chapters of the book are decidedly bittersweet, as one might expect when dealing with the last chapters of any life, but in ways that I found quite surprising and touching. There is more than a hint of a suggestion that Smith grew to resent the house that Plischke built, which became a tremendous source of work in its own right – especially when part of the roof caved in due to a flood. All the while, the separate records of the lives of Bill Sutch and Shirley Smith kept swelling, threatening to engulf all: boxes upon boxes of artefacts and documents, as if two lifetimes of engagement with the world and public service were suddenly demanding to be reckoned with. That Gaitanos managed to deal so sensitively and elegantly with one half of this archive is no small achievement; a fine achievement, too, is the fact that the reader will leave with feelings of genuine fondness for Smith, whom Gaitanos successfully portrays as a full person and, for the most part, in her own words.

This is a book that will sit well on a shelf alongside Maureen Birchfield’s biography of Elsie Locke, and not just because Locke and Smith were comrades and friends. Rather, because in weaving the domestic sphere with the affairs of politics, the private with the public, they show us two women of their time as they struggled to assert who they were determined to be, against the demands and constraints of New Zealand society, and even in some cases against those of the people closest to them.

GIOVANNI TISO is an Italian writer and translator based in Wellington. He is online editor of the Australian literary journal Overland.