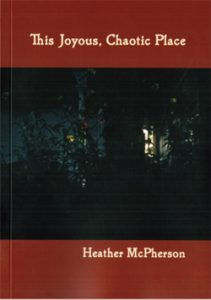 Heather McPherson was the first out lesbian published in New Zealand with A Figurehead: A face (Spiral), which appeared in 1982. Her ground-breaking role is something I cherish and consciously bring to my reading of This Joyous, Chaotic Place, McPherson’s posthumously published fifth collection. All the poems here have been carefully edited by Janet Charman, Lynne Ciochetto and Marian Evans, who formed a new Spiral collective to fulfil the request McPherson made before she died, that Charman edit what she called ‘the garden poems’.

The collection begins and ends at Rangiora’s Ashley Street Cemetery where the poet Ursula Bethell is buried. McPherson made the ‘pilgrimage’ to Bethell’s graveside twice, three years apart, before and after the destruction of the Canterbury earthquakes. Destruction is one of the main threads that runs through the poems – whether in its inevitability in the aging body, or through the metamorphosis of the natural environment surrounding McPherson in the years she lived in the garden flat at Aorewa McLeod and her partner Fran’s house, where many of these poem were written.

The body’s capacity to

do oddities like grow spurs is miraculous but not

as admirable as it turns painful – even lethal. Tree

roots like octopus arms do the same: their creeping

(from ‘The iconography of a tree’)

In ‘Poppies’ memories are opiate-filled. The poet meditates on the vapours and relationships that eased her physical pain and left her mind drowning in the ensuing serenity, a state achievable later in life through the blossoming beauty of poppies in her garden.

the fabric between veins – a fingernail

a web of life-lines in

smoke them now. But to stare oneself

However, it is not all destruction: with joyful humour McPherson cultivates the image of a sensuous, adept older woman in ‘A frosty morning with elated sun and ice crystals prickling the strawberry beds’, washing her delicate smalls in a blue bucket as her younger neighbour watches on. This short poem also comments on the careless attitude of people towards their possessions – treating them as disposable – an attitude that is also all too present in portrayals of the older woman. We need only think of images of Hillary Clinton during the 2016 US election, where she was depicted as frail and unfit for the candidacy. This poem takes the ‘smalls’ of a domestic chore and engages with much larger debates about beauty and aging in society:

How old-fashioned, says my young neighbour

I throw all mine in the washing-machine

Maybe, I say, your smalls are not the sort

that fall apart when agitated & spun

McPherson’s sensitivity to the orality of language demands the poetry be read aloud in the tradition of sharing poetry at women’s meetings. She combines rhyme with repetition, apostrophe and ellipsis in a juxtaposition of exclamation and retreat. These poems are a welcome addition to the archive of lesbian life in New Zealand, which has often been excluded from the Western poetic tradition. McPherson’s poetic voice fills the voids of herstory, especially notable in her poems about the lives of local poet Ursula Bethall and her companion Effie Pollen, but also in use of the cult lesbian icon Xena Warrior Princess in ‘April is the loveliest month’ (I was eleven when I first heard the word herstory and I laughed at the woman using it; I use it here intentionally in apology).

But while you were in Wellington

the grapevine on your balcony

It flounced across my deck like a leafy Gay Pride Queen

and knighting courtiers and gay-boy naughties

with her fairy wand and strutting

This Joyous, Chaotic Place ruptures the traditional singularity of the lyric voice. It is a polyphonic cacophony that shows McPherson’s eco-feminist roots and heralds the centrality of community to enable a flourishing lesbian life. 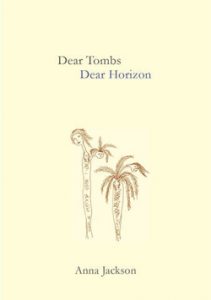 Anna Jackson’s Dear Tombs, Dear Horizon is a poetic essay that allows the reader a glimpse of her time as the Katherine Mansfield Fellow in Menton, France, in 2016. Written fragmentarily with the feel of diary entries, lyrical passages seep through the prose, and throughout Jackson muses on the crux of literature and contemporary culture:

to Martin Heidegger, our selfhood

resides not in what we can say

or think in language, but in our habits,

The collection emulates the style of the American poet Maggie Nelson, the fragments flowing unnamed through the white space, each separated by an asterisk. The reader is allowed the freedom to find connections, which further personalises the experience. This meld of poetry and essay is a form that has other precedents in New Zealand poetics, in collections like Jenny Bornholdt’s The Rocky Shore (VUP, 2008) or the essayistic stylings of Rachel O’Neill’s One Human in Height (Hue&Cry, 2013). In Dear Tombs, Dear Horizon Jackson pushes past the personal into historical and theoretical territory, with not only Catullus and Heidegger but Proust also appearing in the gardens outside the Palais Carnoles:

get up off this bed, believed gardening

a ‘transposition’ of painting,

colour arrangements inside, outside,

as if they were the same

A fragment on page 20 cuts with its startling honesty, as Jackson writes of how she wishes she wasn’t going on a trip to Cyprus to give a conference paper and a poetry reading, as she fears the aeroplane will crash:

only to think of the poignancy it will

give my Virgil poem if I am dead

when people read it, being as it is

about myself as the ghost of myself.

I share in another of Jackson’s fears depicted here: that of the instrumentalising nature of a writer’s life; how it can often feel as if one is living life with the intention not to experience it but to write about it. By combining forms and pushing beyond the purely lyrical, there is room for more direct language and unmasked autobiographical content. Jackson’s voice in this collection moves towards the confessional. The reading experience is almost voyeuristic in the raw exposure of the language. The poetic essay form is one way that women’s subjectivity can take up more space, which is vital to overcoming generations of erasure.

A ticket simply to go, or to go and to return?

to return, to return. I walk once again

the coast and the graffiti

I wonder how to turn the dream about the

tombs into a poem. I think of

starting the poem ‘Dear Tombs’, and

wonder whether perhaps I should

to pile into it everything I have got. 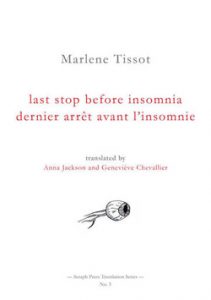 Repetition is prominent in the third instalment of Seraph Press’s Translation Series, Last Stop Before Insomnia/Dernier Arrêt Avant l’Insomnie by Marlène Tissot, translated by Anna Jackson and Geneviève Chevallier. When Jackson was Katherine Mansfield Fellow she met Chevallier, who was working on a translation of the portrait half of Jackson’s 2014 collection I, Clodia, and other portraits. Together they shortlisted six French poets before deciding to translate Tissot’s work.

The twelve poems in the collection are presented side by side in French and English. They are drenched in ennui, so much so that I found the collection difficult. Feelings like emptiness, lack and despair are often subject to suppression both within the self and within poetry, as they can fall under a rubric of angst and be shamed into silence. We all experience them, yet mostly we are wont to disguise them in lyrical language. There is bravery is Tissot’s unadorned directness, in her clarity of feeling.

The sentence, ‘One day, I had no sleep all night’ repeats throughout and across poems. The poems are consumed by this sleeplessness, they lack the energy, the vitality that sleep brings. They are restless but also content in the resulting darkness:

You see, I want to be difficult to love

(‘A contemplative study of a sentimental movement in an urban setting’)

It is a poetics of the interior mind, a litany of musings in simple language. The anxiety of feeling finds its way into the physicality of the form with line lengths varying, creating a discord in the shift from distraction to wonderment:

you haven’t taken off your shoes, now they are full of it

(‘The silence of emptiness ricochets off the expanse of nothingness’)

Seraph Press produces beautifully crafted books with unique boutique appeal and simplicity of design, all of which is a credit to the vision of founder and managing director of the press, Helen Rickerby. The translation series is an excellent way of exposing New Zealand readers to writers they might otherwise not have access to.

All three of these collections make a statement about prioritising women as subject, and in the range of identities these women have (lesbian, older, mothers, French or New Zealander, having moods depressed or joyful) all the poets enrich and complicate our ideas of gender.

EMER LYONS has poetry and fiction published in The Cardiff Review, Southword, Mimicry, Turbine, takahē, Queen Mob’s Tea House and more. She is a PhD candidate in contemporary queer poetry at the University of Otago.