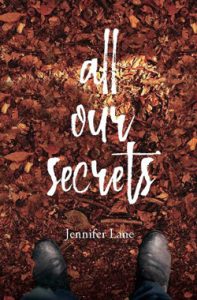 Ostensibly, All Our Secrets is a book about a series of murders, and about a religious commune that moves in to live uncomfortably alongside a conservative rural New South Wales town, Coongahoola, in the 1980s. There’s a mystery to be solved, and an eleven-year-old protagonist, Gracie, from whose perspective we hear the story. It defies genre: it could be young adult fiction for mature readers, or an adult novel rendered from a child’s perspective.

What sticks with me most after putting it down for the second time, though, is not the mystery but the portrayal of family life, and what this book has to say about love and parenting.

Mum never bothered to lift my mattress when she helped me make my bed. She didn’t even move the bed away from the wall like Grandma Bett did. It probably explained why the sheet always came untucked as soon as I lay on it, and why the first thing I saw every morning was the dirty blue and white stripes of my lumpy old mattress.

There’s so much in this passage: Gracie’s mum does love her, does want to help her, but is also desperately short on time, money, motivation. The best she can do is throw a sheet over the bed, but perhaps that’s not so bad. Gracie is loved, and sleeps in a bed; and does it really matter if it’s all a bit of a mess?

Parenting is fraught these days. We constantly hear versions of the old refrain, ‘In my day, we just ran outside, rode our bikes in the street until our mum called us in for tea … kids these days are too coddled.’ And so on. It’s true that the Coongahoola childhood that Lane depicts for Gracie, her nine-year-old brother Elijah and three-year-old twins Lucky and Grub is a far cry from what we know today. Kids do run around outside in this fictional version. When things go wrong and a safety notice is issued, the advice is ‘make sure your kids are home by 5pm’, not ‘don’t let them go outside without an adult’.

The novel is a curious mixture of nostalgia for that type of free-range childhood, and alarmist about the consequences: someone in Coongahoola is killing kids. Gracie’s parents, Nell and Robbie, are wrapped up in their own dramas. Through Gracie we learn that they were married at nineteen or so (because Nell was pregnant with Gracie), that they love each other, and that Robbie can’t stop running around with other women. Nell, frustrated, humiliated, for comfort turns first to the bottle and then to the charismatic leader of the cult that’s moved in down the road.

Unable to see past their own pain, Nell and Robbie pay scant attention to what their kids are up to. Holding things together is Robbie’s mum, Grandma Bett: the family lives with her. Grandma Bett is the real hero of the piece. She is staunchly religious yet spectacularly non-judgemental about her son and his wife who are barely more than kids themselves, as they thrash about in the confines of the life they’re living and the financial constraints of having four kids on one steelworks income, and no tools to tackle their problems together.

The plot turns around a fateful day nine years prior, not depicted in the novel, a day when the whole town had a picnic by the river and things went awry. Gracie, two at the time, remembers the sound of smashing glass and moaning. Nine months later a gaggle of kids was born in the town, some not looking like their dads. Now someone seems to be picking off these kids (known as the River Children) one by one. Gracie’s brother Elijah is one of them.

The second major plot point is the arrival of ‘the believers’, a cult of mostly American evangelical Christians who set up camp by the site of the infamous river picnic after a local woman claims to have seen a vision of the Virgin Mary there.

Small town conservatism and judgementalism, the legacy of that fraught night nine years ago, and the arrival of these unwelcome zealots and their sleazy leader ‘Saint Bede’, throw the town into confusion and division, and Gracie and her family find themselves in the thick of it.

When kids live through trauma, even when it has huge immediate and long-term consequences, they’re still kids. Lane conveys this extremely skilfully. We hear everything from Gracie’s perspective: still with a child’s naivete at eleven, but with the beginnings of adult knowledge creeping in. Grace can be flippant about the kids who have died. She sometimes has self-centred thoughts like wishing someone closer to her would die so that she can be grief-stricken like the other families. Mostly she’s preoccupied by Toby, the boy she has a crush on, and what he thinks of her. She does stupid things like not telling any adults when her brother Elijah goes off into the bush by himself, or setting off herself to try to hitchhike to Queensland despite the clear and present danger. You want to shake her, but of course, she’s an eleven-year-old girl. This is how she would respond. Yet we know the trauma is still doing its work on her through her physical responses – twisting guts, sleepless nights, wanting to throw up, bursting into tears, off her food, pale, stressed.

When they come, the denouements (there are two: the revelations of who’s been killing the kids, and what really happened at the river picnic) are not earth-shattering. In fact both are quite well signposted for the adult reader, if not for Gracie. There’s a (fairly hasty) final action sequence that changes the future landscape for Gracie and her family, signifying both the lasting impact of trauma, and growth and renewal for the family as her parents finally step up to their responsibilities.

The novel’s real achievement, I think, is in the loving depiction of family life in this place and at this time: rissoles with tomato sauce; toddlers with snotty noses; Mum taking time for herself with a glass of cask wine and the New Idea crossword; chain-smoking; dry-grassed front lawns; town gossip; kids’ talk at school; sibling relationships. Coongahoola and Gracie’s family home are rich, warm, alive places in Lane’s rendering.

It’s a powerful reminder of what it’s like to be a kid – or what it was like, back in a time when kids ran more freely than they do now. It was a time of greater independence, perhaps greater resilience, but also of grave risk.

HOLLY WALKER is a PhD student in creative writing at the International Institute of Modern Letters at Victoria University, and a writer, reviewer and children’s advocate. Her memoir The Whole Intimate Mess: Motherhood, politics and women’s writing was published by Bridget Williams Books in 2017, and her essays and reviews have been widely published. She lives in Lower Hutt with her partner and two daughters.