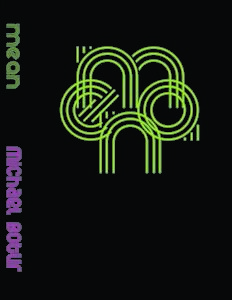 This second collection from the Whangarei writer Michael Botur contains fifteen short stories that are closely observed, energetic and original. With a wry humour, they depict people on the margins of society who are struggling to survive, people who are up against it in many different ways, who have difficulties with the system and its conformities. Some of this struggle is self-inflicted, but for others the choices are limited, the dreams difficult to realise.

Mean is subtitled ‘fables of bros, buds and bashings’, and there is no shortage of accounts involving drug use, sex, violence and lawbreaking. But this collection does include a wider range of people than just those involved in such activities. Botur is actually writing here both about the victims and oppressors, the powerful and those with less power. In fact, he has something for just about everyone who has experienced some form of bigotry, injustice, a sense of helplessness, or just running out of petrol. He writes about moral dilemmas, looking for a way out, the dream of a better life, dementia, sex of any kind, delusion over needs implied or created by the media, discrimination, anger and frustration. That’s a pretty wide canvas of issues and subjects, portrayed by people who live in this country, here and now. They are not necessarily like us, but all are seeking to find a place in that illusive notion we call ‘society’. These people may themselves be often mean, but then the forces of the society in which they live aren’t necessarily that kind either.

The ‘fables’ are dense, intense, requiring close reading to capture changes in plot or details necessary for the context of the action. Beginning with ‘Rubbernecker’, I was quickly drawn in and wanted to read more. The BMX-riding young men from a split family are well-described, the events plausible, the conclusion graphic, macabre, the lesson obvious. In ‘Stick It Up Your Arse’ there is an explosive blast of characters, all slightly larger than life. But they are also identifiable as plausibly real people, whose morality, like that of the sharemarket and marketplace, is merely one of taking the opportunity presented until someone else finds out about the taking whether they realise it or not.

‘Body Without a Head’ revolves around the life of twins growing up in a semi-fantasy world of nightclubs, music industry rip-offs, managers, travel and dislocation, and ending in pregnancy and isolation. Here, the dream of ‘making it’ is juxtaposed with, and in tension with, the reality. Big moments, important events or details disappear in a word or frenetic phrase, as if caught up in a racing tumult of images, experience, the hip language of the moment.

One story in particular stood out for me, halfway through the collection. This was not because it is about an older man with Dutch connections, but rather because it gripped me as a narrative; it was concise, clever, humorous, well-structured and simply told without vernacular artifice. An old soldier with dementia, wife dead, recalls his time in the army in Irian Jaya. He imagines his wife is still alive and someone – he thinks of them as vandals – is damaging the garden, leaving a casserole in his underpants, always leaving the pot boiling on the stove. In this tragic yet funny pattern of events, one cannot help but feel empathy for the central character. His delusions are apparently not self-inflicted – unlike in many of the other stories, where the use of recreational drugs and/or alcohol are a central prop to the storyline.

With a couple of exceptions, however, most of the characters in this collection are people I didn’t like. They are mean, really mean people. These characters carry out a full range of mindless violence against others usually more vulnerable or marginalised than themselves. They are often racist to boot, and Indians and Hungarians take the brunt of abuse here. In the story ‘Joker’, however, the target of a mindless attack ironically turns out to get a real break, the implication being that he used the experience as part of his own comedy show. The blurring of what is a joke and what is not, what’s on stage and what is not on stage, leads to further breakdowns in the relationships between the comedians.

Botur’s characters are often heavy smokers – there are no positive role models of people quitting smoking portrayed here. Frequently, too, they are deluded, stupified or out of it on various forms and quantities of intoxicants and drugs. They are deceitful, dishonest and often plain stupid, yet not always. A character in ‘Home D’ is making the most of his detention and he is studying in order to create a new life when the detention is over. Reference is made to university papers and study in R&R.

Some images stand out as memorable, shocking, absurd: the mindlessness of filling a microwave with a can of fly-spray, plastic cutlery, washing powder and spices, and turning it on high for ten minutes. Opening a fridge to find the only food is a bottle of nail polish. The desperation of Mr Impatient, stuffing himself full of pills as he drives himself and his son around through the traffic lights in a broken-down car looking for a bank that will give him an overdraft. These are powerless people living on the edge looking for some hope, some measure of self-worth, in need of some respect. They also need some petrol as most of the cars have just about run out.

The language used by this writer can be compared to that used by the Scottish writer Irvine Welsh: that is, it’s often a kind of idiolect – belonging to particular subcultures, and certainly not understood easily by all. There is a lot of slang and many abbreviations, and at times it is difficult to follow the course of the conversation. This is taken to an extreme in ‘Escape from Mr Hate’ where words have childlike double meanings dependent on how they are pronounced: Hejt = hate, Juice = Jews, Bear net = bayonet. Likewise in ‘R&R’, where Botur depicts a scene of single-design state houses painted in sad pastel colours and facing different directions, on streets with names with all the letters out of order – or not, depending on your understanding. But the quality of the communication is also being highlighted – for example the mobile phone and texting features in ‘Home D’. The mate visiting, still stuck in a groggy world of drugs and alcohol, evading child support responsibilities and forgetting that the ankle bracelet also serves as a surveillance tool, didn’t read the text about the police looking for him.

Such grotesque characters do have a strong sense of reality to them, even though they are often deluded and inebriated. These are recognisable as people living contemporary lives in New Zealand cities or, in one story, in Australia, who form some sets of high-profile social statistics: some of their antics will be familiar to many via court reports. But would such people be inclined to read these fables or stories, to gain an insight from the mirror that is being held up? I doubt it.

Perhaps these stories would be better portrayed as short films, with powerful, graphic characters, blackly humorous and quite possibly very popular. To quote novelist Alan Duff in his endorsement of Mean: ‘There wasn’t a line, sentence or even a paragraph that jarred. In my humble opinion you have definite promise and I’d never say that lightly.’ Many of these stories have been published elsewhere. It would be interesting to know where.

PIET NIEUWLAND is a poet, writer and visual artist who previously worked on conservation strategies for Te Papa Atawhai. He lives near Whangarei.