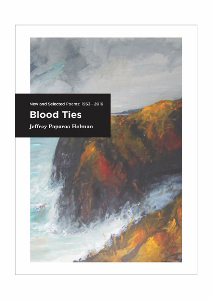 Jeffrey Paparoa Holman’s Blood Ties: New and selected poems 1963–2016 is a career-spanning collection, the earliest poem being one that Holman wrote for his teacher while still at school. For readers unfamiliar with Holman’s work, it shares many of the preoccupations that the late John O’Connor spent his life’s work writing through: the lives and loves of the working class; the spicy patois of the racecourse and RSA; the strained dignity of the disenfranchised; dilapidation and neglect of the past; the anger, tenderness and loss of family, especially those affected by war. Where these two writers diverge, though, is more telling than their similarities: O’Connor wrote often and tenderly of women; they are seldom mentioned by Holman, who populates his poems with men who labour under terribly Spartan tempers. Holman vents in a traditional prosody not dissimilar to the angry leftist neo-Georgian poet Tony Harrison; O’Connor was ebulliently experimental. O’Connor seldom pointed the finger at those wielding power for their own ends, preferring to give his undivided attention to those with whom he was concerned; Holman not only points the finger, he sometimes wags it for entire poems. O’Connor was a consistently urban (or perhaps suburban) poet; Holman often populates his poems in a self-consciously blokey milieu, one which is mapped out on the wide-open yet claustrophobic landscape of the South Island Myth supposedly formulated by poets such as Curnow, despite Holman’s mixed feelings about him in the alternative history poem ‘The secret life of Arana Kohu Rau’, and Glover, whose Arawata Bill wouldn’t be out of place in a pub or two in Blood Ties.

Holman’s tendency to generalise about and make caricatures of the bad guys results in his weakest poems. It is terribly difficult to be angry in a poem and keep things focused and personal. It is easy – too easy – to indict, say, ‘Tory ministers’ and ‘do-nothing Lefties’ (‘Check inspector’) and much more of a challenge to write a poem about Massey, as much a man as Holman, as inscrutable and complex and equally deserving of the care and attention Holman gives to those he loves. On one occasion Holman goes so far as to poke the borax at Death, the biggest, meanest bad guy of all, who comes out looking pretty capricious and far from even-handed. In ‘Death flags down’ the eponymous character picks on people, particularly nice and gormless ones:

Death flagged down a London taxi

and watched the cabbie stiffen.

Just back from a tour of Asia

And in his pocket

He listened to muzak in McDonald’s

The most confident customer.

Death on this reading is a broadly drawn and tasteless bastard. As are capitalists, politicians – and the rest of the list is entirely predictable.

If Holman is at his worst when kicking against caricatured pricks with abstractions, generalities, and clichés, he is very much better when he trains an engaged eye on the world of sensuous particulars, such as in ‘Toroa feeding – Taiaroa Heads’:

and wait, outwitting winter on Taiaroa’s

broad back. Feather mounds atop this bunker

instead and took the headland. Someone cries

and there they are: artists carving a life

out of air, albatross, falling

at speed, to stall, to fill my eye’s belly

and the chicks maw. Squid purée boils out.

This, I think, is Holman at his best: the political shorthand of lines 3–6 is strikingly well conceived; the poem’s facets shift and interlock with remarkable subtlety; the word-music is adeptly handled, the line-breaks adroitly chosen. It is a very good poem. And there are many other good poems in Blood Ties. Holman is not afraid of tenderness or vulnerability and he eschews the irony too many poets rely on to squeeze love poems past their internal censors, which makes him an effective and tender memorialist: ‘Mine’, written for the Pike River miners who died on 19 November 2010, strikes the difficult balance between personal loss and public memorial.

Blood Ties contains a great deal of good work and is a worthy testament to Holman’s dedication to his craft and vision, though I would gladly trade the Jeremiads-by-numbers ‘I meet Mr Hiroshima’ or ‘Entry to the Empathy Museum is free’ for more poems like the loving and clear-eyed ‘Sunderlands, Hobsonville’ or ‘Memoir – For W.G. Sebald’, which, happily, make up the bulk of Blood Ties, a book well worth readers’ time and attention.

The book itself, it pleases me to note, is far more than a text-delivery device. Readers, writers and publishers of an ilk are increasingly interested in what ink, paper and purposeful design can offer that other, more democratic mediums, cannot. However, book design and typography, the latter integral to the former, are demanding and specialist vocations. So far as poetry goes, the demands and specialities are even more particular. University of Canterbury School of Fine Arts’ Ilam Press, which designed and printed Blood Ties, though to be commended for making an effort to make the book something special, has let innovative design get in the way of the reading experience. The poem titles are bright scarlet and set in the text font, a ploy that distracts the eye from the poem. The paper stock is too delicate to bear the weight and heavy black of the ink. The book is 167 pages, but almost all the versos are blank. I look forward to seeing how Ilam Press reconciles novelty with readability in its future productions. 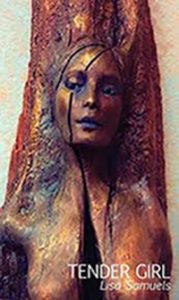 Tender Girl, published by Dusie Press in the United States and distractingly pitched as a novel, is Lisa Samuels’ fifteenth book. The only work of Lisa Samuels I have read, apart from poems in journals, is her terrific critical edition of Laura Riding’s Anarchism Is Not Enough, which came out sixteen years ago. Samuels’ productivity and my lack of familiarity with it mean I am unable to position Tender Girl within her oeuvre or to use this book for gauging her development – this is meant as a disclaimer, since no book is an island, and my reading of this one I’m sure is hampered by my lack of acquaintance with Samuels’ sizable body of work.

However, Samuels’ book is strong enough to make a case for itself. It follows the titular amphibious Girl as she gads about on dry land, making her way through a series of picaresque encounters, which add up to a kind of polyvalent Satyricon, albeit without the naughtier bits. The tone of Tender Girl is at once celebratory and oppositional – like Whitman’s ‘anti-disgust’, which is a paean to the ‘lung-sponges, the stomach-sac … The thin red jellies within you or within me … these are not the parts and poems of the body only, but of the soul’. Tender Girl also seems to enact American philosopher Martha Nussbaum’s argument for emotion as cognition, as a source of knowledge almost identifiable with thinking, and perhaps even superior to it.

There is a narrative, of the kind familiar to readers of David Markson, but Tender Girl is more episodic than, say, Wittgenstein’s Mistress. Sentence by sentence, the text accretes, but the trajectory is fatalistic and the progress is inexorable: Girl has a point of origin and a fixed destination, and everything between points A and B is a preordained experience to get her to where she’s going. At no point can the reader imagine her making another choice and taking another path, such as eschewing motherhood in favour of higher education – Girl seems to have no volitional agency whatsoever and struggles to differentiate or evaluate her experience beyond what feels good and what doesn’t: ‘Girl is a true regarder, slack in the troth but fulsome in particulars …’ She is a semi-liquid chimerical nervous system thrumming with emotion, which is shaped and stimulated by sensory data. Even when Girl is at her most purposeful and cogent, she seems more than mildly Asperger’s. ‘Girl’ isn’t even really a character. It (or she) functions as a locus that attracts certain qualities to itself: bodily un-differentiation; incompleteness of ego formation; empathetic deficiency; a surfeit of fecundity; irresponsibility.

Given the milieu and characteristic of Samuels’ anti-hero (for that is surely what she is), the book that most often came to mind when I was reading Girl was Ed Dorn’s Gunslinger. Samuels’ book, which stars a ‘visceral Little Mermaid’, seems like the antithesis of Dorn’s, the latter a hyper-hard-bitten and masculine post-modern Western, in which the most fully fleshed women are whores or madams. But both of them are, to my reading, anti-Westerns: polyvalent yet single-minded protagonists wandering through a mythologised open-ended landscape, generating Americana-tinted surrealistic bon mots during a series of discrete encounters with weirdos, leaving bodies in their wake as they move towards an ambiguous self-fulfilment: self-fulfilment which shades annihilation.

Surrealism’s intense misogyny – and that of its 19th-century progenitors, usually written by narcissistic scions of privilege, such as Isidore-Lucien Ducasse (Comte de Lautréamont) – casts a pall over Samuels’ book, which, it must be stated, is certainly better than its sophomoric source material. Taking its point of origin in Comte de Lautréamont’s phantasmagoria of a bestial rape by his ‘hero’ of a female shark, the trans-species evolution-straddling Girl is born of violence, and Samuels’ account of her terrestrial odyssey is a sustained mediation on violence, especially its transformative potential as a means of self-making, much like Dorn’s Western epic and Cormac McCarthy’s Blood Meridian. It may well be that such ostensibly hyper-masculinist texts are my points of comparison because my own reading is implicated in them. I did begin to get worried when Ted Hughes’ Crow started muttering his attraction to Girl. But I have read Tender Girl with care, and Dorn and McCarthy echoed in my mind, but not, for instance, Djuna Barnes’ Nightwood, another novel of female becoming. Girl is violent and Man is violent to her:

He held her down and pushed and made her voice turn into nothing tangent; of a sudden she could sing she sang she on the floor sange troubadour beloved fell apart.

He was a cleverer, he adapted, he wrote her words to go with his thrust in her sticky substance salty pushing

‘til a day I picked triumvirate and blew myself away, the eyes looked once at my own death impossible to feign the happiness they both surmised.

Ambiguous, but not too ambiguous. Tender Girl is an unusually single-minded book, not experimental as it is often described. I suspect Samuels knew exactly what she was doing: making a text that for all its sticky, watery, ooziness (largely an effect of diction not syntax), has strong bones and conveys strong and sometimes disturbing ideas about the body (and that of the law), its vulnerability, and how its vulnerability and fecundity, whether transgressed or trespassed upon by oneself or another, is the ground of transformation. Tender Girl, in the end, spoke to me as an Ovidian episode slowed down and sustained across 190 pages, rich in associative potential, an enactment of its theme of self-begetting.

ROBERT MCLEAN is a poet, short-story writer, critic and reviewer. Born in Christchurch, he lives in Featherston and he works in Wellington for the New Zealand Government.