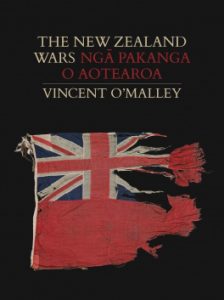 Much of New Zealand history lies as yet untouched, and a topic once covered may sit for a generation before another historian picks through the archives again. New Zealand’s nineteenth-century colonial wars are a notable exception, with Vincent O’Malley’s The New Zealand Wars: Ngā Pakanga o Aotearoa now added to a long list of titles, some of which are still in print. If, as suggested in the New Zealand Herald (6/12/2018), our ‘violent colonial past’ had been forgotten, this surely is hardly the fault of New Zealand historians.

But many New Zealanders remain stubbornly ignorant, and recent calls have been made for schools to add the New Zealand Wars to their core curriculum. The New Zealand Wars is designed for this purpose, with O’Malley himself stating his hope that it ‘could be used as a resource to kickstart the process’ (NZH, 18/5/2019). Certainly this volume will be attractive to high school students; it is written in accessible language, and its many images, mainly photographs and paintings, with a few maps, tables and graphs, are presented appealingly on glossy paper. School librarians should also be pleased; the book feels well constructed, bendy enough to sit comfortably in one’s hands without falling apart after a few readings.

Vincent O’Malley is a respected scholar who successfully bridges the academic and professional historical fields. His recent tome, The Great War for New Zealand: Waikato 1800–2000, is a comprehensive investigation of Tainui’s colonial experiences. The New Zealand Wars: Ngā Pakanga o Aotearoa, in contrast, follows a quite different style and format. It is a deliberately shorter text, designed for easy consumption, and beautifully illustrated. In covering a large swathe of history and events, the book’s brevity and the profusion of images has left insufficient room to address the topic fully. The chapters amount to 250 pages; almost 15 per cent of these are purely image and caption, and over 60 per cent of the remaining pages sport a picture, more often than not occupying half or more of the page. The main text alone equates to about 138 full pages at most, somewhat less than most other histories that have attempted to cover the full scope of the wars from the 1840s through to the 1870s. The small size of the main text also means less room to explore wider historical contexts, nuances, arguments, personalities and motivations.

The lack of an index and a paucity of endnotes seriously restricts the book’s usefulness for university teaching or scholarly work. Chapter Three, for example, on the Wairau, Hutt and Whanganui conflicts between 1843 and 1847, has just two endnotes. The reader must take assertions on trust, or wonder what sources have been consulted. For example, one might agree that the statement ‘It has been suggested that government determination to assert sovereignty … was the overarching cause of the wars’ (p.27) is correct, but who made this suggestion? As the most recent offering on the New Zealand Wars, the book has been able to access the latest scholarhip, including Waitangi reports; it is a pity that, in most cases, the author has not referenced these for readers wanting to investigate further.

Given the antagonism between combattants, archival lacunae, differing agenda and lingering bitterness, it is hardly surprising that historians have produced various interpretations and arguments about the wars. O’Malley engages in a fairly brief historiographical discussion in the introductory chapter on the causes of the wars, and how authors have subsequently portrayed them, using mainly classic works by authors such as James Cowan, Keith Sinclair, Brian Dalton, Alan Ward and James Belich rather than more contemporary competition, such as Danny Keenan or Matthew Wright. O’Malley correctly asserts that no one cause can explain the violence, and that the old chestnut – was it land or sovereignty/rangatiratanga? – holds little relevance when both sides believed you could not have one without the other.

Military history buffs would be expected to comprise a good chunk of the potential consumer base for this sort of book, but they are likely to be disappointed. The book provides a short account of almost every military engagement that occurred, but in most cases these lack the kind of detail the enthusiast craves. The scale and layout of the book constrains these accounts to short definitive sketches, which in turn gives little room for alternative interpretations. For O’Malley, Colonel Despard was a bumbling fool at Ōhaeawai (rather than merely deceived by superior Māori military engineering, as some other historians posit); Governor Fitzroy refused to repond militarily to the Wairau affray through a ‘principled stance’ (rather than lack of personnel); the Kīngitanga abandoned Ngāruawāhia in an attempt to facilitate peace (not because the location lacked any strategic value). The unsuccessful Pai Mārire attack on Sentry Hill, according to O’Malley, is disputed, and they were likely following rational military tactics; most historians suggest that it was a rash frontal attack. A more expansive text would have provided space for evaluating these sorts of historiographical differences.

Apart from its book-end chapters, The New Zealand Wars: Ngā Pakanga o Aotearoa is organised geographically. Because the campaigns tended to be localised, it is roughly chronological, with only the occasional jump back or forward in time. However, this can sometimes lead to important factors being elided from the discussion. For example, discussion on the emergence of the Kīngitanga sits in the chapter on the Waikato Campaign (1863–64). The first two wars in Taranaki (1860–61 and 1863–64) precede this, meaning O’Malley deals with the involvement of Waikato and Ngāti Maniapoto in Taranaki as iwi actions rather than in terms of the movement’s overall aims and principles.

Organising the book according to military engagements also provides less opportunity to discuss overaching themes. We get little appreciation of the impact of pre-Treaty developments, such as missionary Christianity, or the inter-tribal musket wars. The latter was particularly relevant to the Waitara dispute in 1861, which arguably was the spark for the following twelve years of war. Waikato raids in Northern Taranaki in the 1820s had led to considerable population dispersal through the removal of prisoners north, or migration south. The return of captives and exiles resulted in a less cohesive tribal structure, which fed into iwi divisions over whether to sell or hold on to land. The return migrations, coinciding with an influx of settlers at New Plymouth, fed tensions between Māori and Pākehā. Knowing this would have given the reader some context to the factions within Te Āti Awa, Te Teira’s offer of Waitara for sale, and the subsequent outbreak of war. There are other themes that are skipped or lightly treated, such as the complexity of ‘loyalist’ Māori motivations for fighting alongside, or on behalf of the Crown, Te Kooti’s objectives towards the Kīngitanga (did he desire to usurp the kingship?), or the machinations and power struggles between Governor Grey and the elected executive, or between parliamentary factions.

If there is a central theme to The New Zealand Wars: Ngā Pakanga o Aotearoa, it is that the wars came about due to settlers’ hunger for land and the government’s determination to impose its sovereignty in the face of Māori resolve to maintain rangatiratanga. There is little doubt that these conflicts would not have occurred without settler colonialism. It is no longer acceptable to justify the wars on the basis of a colonial predestination, native savagery, or chivalrous contest. The wars were nasty, brutal and devastating for those Māori communities it affected. O’Malley is clear where the fault lies, and would like these histories to be more widely known. Last year, Chris Hipkins, the education minister, rejected a call to make the the history of the New Zealand Wars a compulsory part of the school curriculum, stating that schools needed ‘flexibility’ to determine what history they teach (Stuff, 13/9/2018). There are no doubt many New Zealanders reluctant to confront the dark past upon which our nation was founded, and I suspect that the government fears that compulsion might generate a culture war in which this base is agitated by dog-whistle calls from prominent reactionaries.

What The New Zealand Wars: Ngā Pakanga o Aotearoa does well is give a good, straightforward account for school students, or others wanting to find out about the wars. Its format means it is easy to read and understand. Those schools that do choose it as a resource will surely find their students end up better informed on the wars than the general public in New Zealand. The hope is that students will be enthused in the topic and start to dig deeper into our country’s histories.

LACHLAN PATERSON is a professor at Te Tumu, the School of Maori, Pacific and Indigenous Studies at the University of Otago. His most recent book (co-written with Associate Professor Angela Wanhalla) is He Reo Wāhine: Māori women’s voices from the nineteenth century (Auckland University Press, 2017).