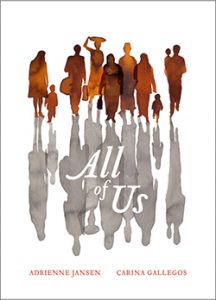 Writing migrant stories can turn into a perilous crossing. How do you empower without assuming? How do you give voice to people who have been taught by experience to stay silent? How do you know you are pulling out their real thoughts and not just something they think you should hear? And what are the implications of asking them to write in a language they are just learning to use?

These are issues I grapple with every time I sit down with writers who are migrants. It was therefore fascinating to walk around in these two sister volumes, soaking up the beautiful poetry but also pondering the decisions made on voice, editing and theme.

All of Us is a poetic correspondence of sorts. Authors Adrienne Jansen and Carina Gallegos, both seasoned poets, together weave elliptic connections between lived migrant experience and stories they have been told. More of Us is a mirror-sister: Jansen and Gallegos have gathered, and in some cases seeded and grown, a harvest of poetry from writers with some connection to Aotearoa. In most cases these are migrants to Aotearoa, but at least one is an expat Kiwi living and working in Spain. Some writers lived here for a while but have now moved on. Many are new migrants; others have been here long enough to raise children and grandchildren. In More of Us, fifty-two writers – some experienced and known names, most first-timers – speak specifically on the migrant experience. They have been gathered through networking, a call-out, and direct mentoring in schools and ESOL classes.

I’ll admit I approached these books with initial trepidation. Aotearoa does not always deal well with the voice of the ‘other’. In the early part of my writing career, I was constantly asked to display my migrant trauma – I’m New Zealand-born, but my parents were migrants and ex-child refugees. This makes me a second-generation migrant, I guess. But walking around in a skin like mine makes me prone to being asked to ‘teach’ people all kinds of things about my culture, even if I don’t know it that well myself.

Happily, More of Us is not at all patronising. Indeed, it’s a delightful anthology – generous and thoughtful in what was included and how it is said. In their introduction, editors Adrienne Jansen, Clare Arnot, Danushka Devindra and Wesley Hollis state that they wanted to include a range of experiences and voices, and also that they wanted the poems to be accessible, ‘[able] to be read by a wide range of readers’. They also admit to a prolonged editing process, ‘going back to the writers time after time, shaping, editing, suggesting’. The hand of the editor can perhaps be seen in a few of these poems, but for the most part, the poems are polished to just the right degree of rough beauty.

Here are poems laughing wryly at the communication pitfalls of learning a new language, as Charles Olsen does in The Chess Game. Here is a still, quiet poem about poetry as connection between generations, poetry as memory. Nicole Wang – her hesitant, yet eloquent voice in English beautifully preserved by the editors – writes:

The poem card was always in his pocket.

He thought about every word over and over.

The happiness in his face was so clear,

(‘Reading Poems with my Father’, by Nicole Wang)

The simplest poems are often the most effective. The words seem to get out of the way so that the feelings are just left, standing quietly. I was moved by ‘The Garden’ by Maha Al Mansour:

Seven months before we came to New Zealand

I went with my friends to our favourite garden.

We walked, we played, we laughed together.

Maybe this poem spoke to me because of the stories my grandmother told me of her time running away from the Japanese, during which she seemed to spend a lot of time laughing in lychee gardens. Maybe I enjoyed the poem because it’s so open and fresh. But it reminded me that the resonances we feel reading poetry are best when they are unexpected.

In other poems, the apparent childlike simplicity of the words is supported by repetition, or quick little twists of detail: an English husband giving away his Samoan wife’s ancestral mats in Anne Hollier Ruddy’s ‘Song of the Islands’; the green army jacket of a lost husband in Asaid Eshaq’s ‘The Colours of My House’.

There are many scenes of family gatherings, over shared meals, television or football (so much football!); there are tables groaning with food and food metaphors. I enjoyed Mere Taito’s clever ‘Bobby is the Name of a Boy’ in which she equates migrant workers to imported fruit:

bound for a lunchbox

There are also many arrivals, departures, longing – subjects that are expected in a collection of migrant poetry, but still moving to read. These moments, although specific, touch on the universal. Wes Lee writes of a moment on a beach many of us have had:

but here was the wild and the wind

sometimes so strong it filled your mouth

I rest my head on the window,

listening to my mother’s song.

She is singing, ‘My Sediqa

why are you too far from me?

When is the day you are coming?

When is the day that I can see you?’

Although many of the poems describe happy domestic scenes, loss often seems to be just below the surface. More than one poet describes a sense of confusion and New Zealand not being what was promised. I find this a welcome departure from the established tradition of migrants divulging how they were ‘saved’ by the host country; the reality is that the struggle to adapt, to learn, to figure out new hybrid identities is just beginning. In ‘The Weekend and the Carnival’, Anni Pinedo Bone, a student now in Porirua, expresses boredom in typical teenage fashion:

In Columbia, it’s the carnival.

There is music everywhere.

In New Zealand, it’s the weekend.

Meanwhile, in ‘Tears’, Joselyn Khor and Khor Lay Ping are brutally frank about their reception in our ‘no, of course we’re not racist’ country:

Grounded in the land of the long white cloud.

Is it a home if you’re unwanted?

The country of your birth also seeks to erase you. 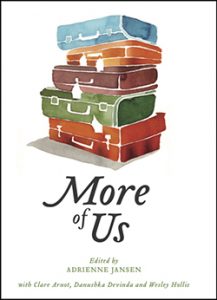 And so we come to the politics. For the most part, the poems in More of Us are restrained when it comes to commentary on the politics driving migration. Even when events are mentioned they are subtle: echoes of trauma rather than full-frontal depictions. This rings true: I was brought up with my mother counselling me to keep my head down and to never speak up against injustice, especially injustices done to me. There’s a fear among migrant groups that speaking up will agitate the locals, and that hard-won ground in acceptance will be lost. Younger people – especially writers and creatives – often come under pressure to put a sunny spin on things. But in an era of increasing nationalism and outbursts of racism, the time for pleasing acquiescence is long over. I cheered every time someone actually said what they thought.

In contrast, the poems in All of Us are more familiar to Western readers: boldly calling out inequalities and cultural assumptions. This is because Jansen and Gallegos are not only more experienced, but have privilege on their side. This is something they are acutely aware of. Jansen says in the introduction, ‘I didn’t want to take on the voice of the migrant or refugee. I might be recording the stories and experiences they’ve told me, but I’m not taking on their voice.’

To solve this issue of representation, Jansen and Gallegos experimented with perspective: thinking about what they experienced doing daily activities compared to what somebody from a migrant background experienced. Says Gallegos:

when you work with people or communities from refugee backgrounds, you hear these stories over and over again. The stories go on for days and people experience them in their heads every day, and to tell them in a poetic context brings them alive in a more succinct way. [B]ut we don’t get to experience the ‘there’, we only experience the ‘here’.

The authors stress that they are ‘retelling’ stories on behalf of others, a kind of documentary in poetry. For the most part, this approach of showing rather than telling works well. Both writers are good at hanging out in the background, letting their ‘characters’ speak for themselves. The arrangement of the poems in the collection is not thematic, more a scattering of thoughts, like skipping from one seabright pebble on a beach to another. But every now and then, author commentary slips through. In ‘Mary’, Jansen seems to berate us for colonising language:

You smacked her for talking

in her own language.

You made her language a sin.

You stole her words, changed them

and made them your own.

In other poems, the authors’ perspectives take over, describing their point of view as they take a stroll in a market, or teach an English class. As in all documentary forms, objectivity is an illusion. The writers control what we see and help us frame our reaction.

All of Us is, indeed, a window into another world, a window framed by people on our side of the wall. As a stand-alone volume it might be criticised for still being from one perspective, but More of Us provides a satisfying counter-balance. I would recommend reading the two together: one the real voices; the other saying what those voices cannot, at least not yet. Jansen and Gallegos bear sympathetic, warm witness to their subjects, and it’s evident that this level of trust has taken years of hard work and communication to build up.

I enjoyed the poetry in All of Us and More of Us, both in terms of craft and content. It felt as if I could sit with each poem, breathing it in, holding for a while and then letting go to breathe in the next poem. Sometimes I nodded in recognition; sometimes I frowned at having something shown to me in a new perspective. There were poems I carried with me to work and out to lunch, and this to me is a measure of their success.

Having so many voices in these books ensures a richness and authenticity, and I think these books are a valuable addition to literature in Aotearoa. Most exciting, to me, are the talented new voices in the More of Us line-up. We cannot survive without more voices to tell the story of who we are and where we are going. More work from these writers, please.

RENEE LIANG writes poems, short stories, plays, operas and musicals; collaborates on visual arts works, film, music, computer games; and runs community events such as The Kitchen, bringing neighbours together with writers to share food and stories. In 2019 she launched When We Remember to Breathe, a correspondence of motherhood with Michele Powles, and a children’s play, Sofija’s Garden. In 2018 she became a Member of the NZ Order of Merit for Services to the Arts, and won Next Woman of the Year in the Arts and Culture category.