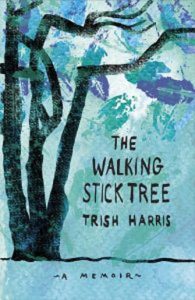 Trish Harris’ The Walking Stick Tree is the story of the author’s life with pain. The reader follows her progress over some 47 years, from her childhood home in North Otago to her current home in Plimmerton. The narrative is punctuated by essays on various subjects – chronic illness, identity, spirituality – and Sarah Laing’s illustrations are a pleasant addition, providing light-hearted pictorial asides.

Harris was diagnosed at six with juvenile rheumatoid arthritis, a condition that just seemed to arrive one day, with its pernicious swellings, fevers and rashes. Over a matter of weeks, a child who had been active and physically able became schooled in the many things she could no longer do. A testament to her character and resilience, however, much of the memoir depicts the exceptional desire for inclusion and independence that drove her to find ways around seemingly impossible activities.

The first part of the book chronicles the narrowing of a young girl’s world: the changing of her appearance, her growing understanding that she will have to endure pain, or, at the least, discomfort, doing things that her peers take for granted. To counter the often-heavy mood, though, there are several moments where others’ compassion and humour are described beautifully – schoolmates carrying Trish upstairs to class, her brother teasingly helping her to put her socks on, a friend helping to get her medicine:

Deborah was getting a glass of water for me and came back stirring the dissolving disprin with her finger.

‘Don’t put your finger in there,’ I said.

In terms of structure, Harris’ memoir is very linear, despite the insertion of the personal essays and Laing’s drawings. Yet, although it is chronological by nature, the book is uneven in its treatment of different time periods. I found that mid-life Trish was not as well-drawn as the young Trish – the story of her experiences of studying at university, getting a car and buying of a home felt skipped-over in comparison to the previous two-thirds of the book, which were devoted to childhood and adolescence. Some of the essays, too, had a voice that was very similar to that of the main narrative, and this in turn alerted me to how uninvolved, sometimes, the author seemed in her own story. Weighty topics like religion and spirituality, for example, were distantly related in sentences full of abstractions. This was surprising, given the large part that the Catholic faith, and then a more self-evolved spirituality, has played in the author’s life.

That criticism aside, for its valuable insights into chronic pain (which, thankfully, to a large degree has ‘burnt itself out’, in Harris’ case) and the impact it has – not just on daily life, but on concepts such as identity, self-esteem and human rights – the book is a very worthwhile and intelligent first-person account of life lived creatively despite pain.

The Case of the Missing Body, while also on the subject of living with pain/disability, is an entirely different book to The Walking Stick Tree. It contains scientific writing, poetry and, predominantly, prose, to tell the story of a woman regaining the capacity to connect with herself physically. 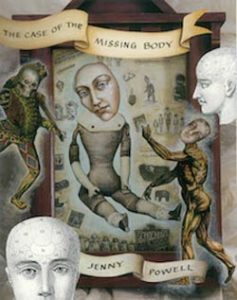 Powell uses the pseudonymous Lily in the prologue of the book to introduce us to the central character (who will be ‘I’ throughout the book). From childhood, Lily has had a proprioceptive deficit and joint hypermobility syndrome, which, combined, and not properly identified or treated in her youth, have caused her considerable pain and distress. Now in mid-life she is anxious, lacking in confidence and, admirably, desirous of change: she joins a gym and employs a personal trainer.

It is lucky for Lily that Patrick is her trainer. He has a great deal of knowledge, a warm manner and a willingness to read up on her conditions. He also has endless patience. Lily is the sort of client who likes to email her personal trainer. A lot. And not just about gym-related matters:

I think about how to explain the body part of my childhood to Patrick. I can’t talk about it but I could email him. Patrick is amazingly tolerant of my verbal difficulties around anything to do with my body. He lets me communicate in the only way I can. I don’t expect it always to be like this, and I do realise how unmanageable it would be if all his patients did this.

Powell’s book is memorable and affecting for a few reasons. One is its very good characters. Patrick is not too good to be true. He is a recognisable type of health professional who actually cares. Fortunate readers may have encountered one such person: the sort who will recognise a struggling soul and put in some extra time to help him or her; the sort who knows that they shouldn’t really let someone like Lily email them all the time – that they should tell her it is not in their job description to answer all of her questions – but who answers all of her emails anyway.

Lily, herself, is a fantastic character. All the more so because of Powell’s brave admission in the Introduction: ‘Here is Lily’s story. Her story is my story, but in order to write it I have to step back, and examine it from a distance. There is no other way I can tell it.’ Lily is uncoordinated. She is impatient with herself and others. She is new to lycra. She could not be more awkward, physically or socially. At times, comedy arises from this:

Patrick said to do a 10-minute warmup on the cross-trainer. I get on. Same old story. Can’t make it go. Green button. Press the green button. Nothing. Oh please. I mean, green for go. How basic is that? I’ve had enough. This is totally ridiculous.

I go back to my corner. His first question: ‘Have you done your warmup?’

‘Fuck.’ I don’t mean to say that and it comes out quite loud.

At other times, Lily’s anxious oversharing or panicked overreactions are excruciating. The reader is embarrassed for her and empathetic towards her in turn. This is a woman who had a punitive childhood, underwent electric shock treatments and spent time in a psychiatric hospital. This is not just a programme of personal training to Lily; it is a way to reclaim her body–mind connection and her identity. It is a way out of pain. As the memoir progresses, we come to understand that these sessions are probably the most positive and helpful medical intervention Lily has ever experienced.

This is a moving and involving book that aligns with the growing fields of the Health Humanities and Disability Studies. Powell is able to shape a narrative that communicates the bare humanness of physical and mental suffering and the need that people in pain have for a Patrick-figure. In Patrick are all of the attributes of a practitioner who sees the person who embodies the condition he is treating. Patrick helps his client, body and mind, by listening diagnostically, then by applying his special skillset to the problems as they present. He helps most of all by paying attention to his client’s narrative and perceiving how aspects of her life story have left impediments, physically and mentally, that he might remove or improve.

Powell’s The Case of the Missing Body is an amalgam of the lyrical, the diaristic and the scientific. It has tender spots throughout that make the reader wince for the main character, and then shout Brava! The rawness and unashamed sharing of human vulnerability is refreshing in a literary world that can sometimes be posturing, and too concerned with the glowing presentation of the autobiographically based main character.

JOHANNA EMENEY is a tutor of creative writing at Massey University. Her second book of poetry, Family History, has recently been published by Mākaro Press. She is currently working on a chapter about disability and contemporary poetry for the forthcoming Routledge Companion to Literature and Disability.