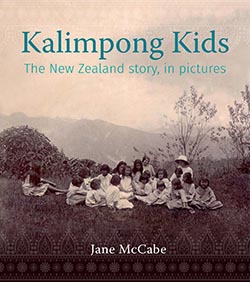 I have been struck by the silence that was common to our family histories, and by the role that photographs played in keeping curiosity alive.—Jane McCabe

Kalimpong Kids begins with a photograph that author Jane McCabe was handed by her father before her first journey to India, when she enquired about her deceased grandmother’s Indian origins, which were rarely spoken of. Akin to an informal school photo, it shows girls in bright white pinafores, their matching bows and headbands in stark contrast with the colour of their skin and long, plaited hair. The author’s grandmother, Lorna, is there, and through this McCabe learned that Lorna is one of the Kalimpong Kids. The misty hill station of Kalimpong becomes one of her destinations when she travels to the sub-continent.

The book tells the story of the journey to and settlement in New Zealand of a number of the Kalimpong Kids—young men and women who, like Lorna, were born of interracial relationships between European planters and Indian women. Many of the women were indentured labourers from nearby states who came to work on the Assam and Darjeeling tea plantations. Their children, born from liaisons with their plantation superiors, were often admitted to and lived in Dr Graham’s Homes, from as young as two through to eighteen. The schools were set up in Kalimpong by the Scottish Missionary Rev. Dr John A. Graham during British rule of India. Graham was intent on finding a place for these Anglo-Indian children who, within the British or Indian communities of 1900s India, had none. Upon graduating, 130 of these children were again ‘saved’ by Graham when they were forced to leave India and placed with Presbyterian families throughout New Zealand as either farm hands or domestic help.

The schooling and subsequent organised emigration scheme for these young adults, aimed at assimilating them into society in New Zealand, was thought of as a means to offer these children ‘independence and education’. But it was a Western and religious orientation, one that ultimately ruptured them from both their parents and their Indian heritage. Their banishment was made evident by their constant and unchanging ‘outsider’ status.

The photographs presented here by McCabe are a celebration of the unique lives of these Anglo-Indians, who assimilated into New Zealand culture as best they could. It is also a celebration of their descendants, who in recent years have begun to explore their ancestors’ often secret histories. The array of photographs is testament to the efforts of committees formed in each of the main city centres, for the original Kalimpong Kids. These committees provided the kids with a network to keep in touch with each other, and those connections have in turn created bonds strengthened by their descendants. The photographs have become the very things that in some cases connect the people—shared and handed down generation to generation. This is an important part of the story: some descendants had no idea of their ancestors’—even sometimes of their parents’—Indian heritage.

Kalimpong Kids documents a particular span of history when children born of interracial relationships held a liminal societal place; it reveals a time when photographs took pride of place on a mantelpiece, and when secrets could be, and were, well kept. But it also documents the ability that descendants now have, made possible by technology, to discover their relatives’ histories, to explore their own genealogy. Amazingly, Dr Grahams Home in Kalimpong still holds the original registers of pupils’ names: those descendants who have made the journey to Kalimpong have been able to find their ancestors’ details there, written in ink on paper.

What is surprising to me about many of the photographs is how similar some of them are to the few that have been handed down to me: photos of my Indian ancestors, working as indentured labourers on sugarcane fields in Fiji, sent there by the British who had colonised both the land they came from and the land they were sent to. In all of these photos, everyone wears the same starched white anglicised clothes—not the brightly coloured silk or turbans that epitomise Indian cloth. White pinafores, shirts, petticoats, trousers and sometimes sarees, made even whiter by the black and white photography, immediately tell and us which style of dress, which culture and which education system was more ‘valued’.

The beauty of Kalimpong Kids is the black and white photographs of a bygone era illustrating a largely unknown, forced emigration scheme that few have seen—revealed, for example, by a brother and sister astride a rickshaw in Edwardian dress in simmering Singapore, or a British tea planter brandishing his gun with a tiger, the bounty of his hunt. Well-categorised one-page sections inform the reader chronologically about the historical significance behind the photographs. We learn about the mores of society of the time and the immigration policies that accepted the Kalimpong Kids, as well as world events such as the World Wars that affected both the scheme and the kids who became veterans of it. We learn how acceptance of these Anglo-Indians came and went with the political policies that shaped New Zealand: initially the country seemed egalitarian enough to accept mixed-race people, but by the time the scheme finally ended in 1938, the government of the time found mixed race people ‘undesirable’.

The importance of Kalimpong Kids lies in this accessibility. But with each turn of the page questions arise. Apart from the inclusion of an excerpt from William Beaton’s memoir containing lush descriptions of the tea plantations and the heart-breaking dislocation he felt when he was placed in the Homes and then was sent to rural New Zealand, any descriptions from the Kalimpong Kids themselves, descriptions that might include their transitions throughout their journey, are lacking—one guesses, perhaps, due to missing or discarded historical records or the shame that surrounded these stories. The gap is noticeable, for we are left wondering: how did the children feel when they came to New Zealand? How did they feel growing up in an environment that excluded them from their origins? How did they feel about not being able to communicate with their mothers for such a long time?

In the end what becomes the biggest shame is that, because these stories were never allowed to be told, descriptions of history from those who lived it have been forever lost. Without these original voices, we must now allow their stories to be told by others. It is up to the descendants to speak for their ancestors. I hope McCabe’s research into her grandmother’s life will serve as inspiration for others to try to tell their own ancestors’ stories, from their perspective, to record more of those lost voices.

Without McCabe’s excellent efforts, few people would know of this slice of history. And here it’s important to emphasise that this story, though little known, is not uncommon. For over a hundred years Indians have been migrating and merging into New Zealand society. I recently watched the BBC production of Eleanor Catton’s The Luminaries and saw Himesh Patel play one of the main characters, and it felt ground-breaking to me to see someone of South Asian descent embodying a main character in a period piece without it being a central focus, their ethnicity unexplained within the narrative. However, articles on the series took a different perspective, calling Patel’s character ‘an inspired piece of colour-blind casting’.1 But I did some research and found out that, though Catton did not write ethnicity into this character in her 2013 novel, Staines had every right to be of Indian descent. It was an Anglo-Indian from Goa who discovered the first gold in Otago, which in turn led to the rushes of the 1860s, the era in which The Luminaries is set.2

This is why stories like those in Kalimpong Kids need to be uncovered and heralded: to show on screen and page that diversity has always been with us, though racism or shame around it has meant the people of the past have been poorly represented, or not given a voice at all. As McCabe points out, the Kalimpong Kids emigration scheme ensured the children ‘continued to be sent to diverse locations to ensure low visibility’. If more of these stories had been told, if ‘low visibility’ had not been favoured, then diversity on our screen and page may look different today. This book holds up a mirror to the shame of our past, the shame of a society that saw disgrace in interracial relationships and illegitimacy. It also honours those who managed to survive it. Let’s hope we can see there was really no shame at all, and let’s hope we’ll not silence others on those grounds again.

SHANA CHANDRA is a New Zealand freelance writer of Fiji-Indian descent, currently based in France, who works in the magazine and digital publishing industries world-wide, engaging with fashion, art, design and culture. Having completed her MA in creative writing in Sydney, she is currently working on her debut novel, Banjara, a fictional account based on her indentured ancestors. www.shanachandra.com