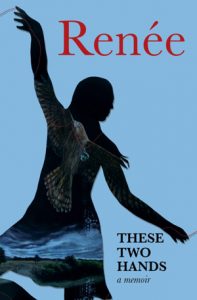 How perfectly form and content marry in this warm, sturdy, enveloping and deeply personal memoir by Renée. Choosing a quilt as her structural guide, Renée tells the story of her life in 88 ‘patches’, one for every year lived.

Freed from the chronological plod of a straightforward journey, she jumps through time and from place to place at will, and a pattern emerges as characters, themes and experiences recur like repeated colours. This feels both confident and gracious, allowing the reader to pick out threads to follow without any overt authorial insistence on what is most important. The stories unfold one by one, both real and fictional, to create the larger whole – the life of a writer, mother, sister, daughter, gardener, lover, friend.

Renée’s vivid ‘patches’ about her childhood make it plain that her journey has been extraordinary – no one would have expected this girl to become a writer. Her family hit by tragedy before she was five, raised in financial hardship by a fiercely proud solo mother, carrying big responsibilities for childcare and housework while still a child herself, denied secondary schooling so she could help pay for the younger ones to have it – these stories are told without self-pity, but the picture emerges of an early life that demanded hard work and self-reliance. There was no privilege – it was hard scrabble, hard work, and emotionally tough. But the good times sing out too, with fun and community, music, Labour party picnics, amateur dramatics, family jokes and legends, bone-deep loyalty, and loving celebration of working-class values of solidarity, grit and humour – all the ingredients Renée has used in her work, and that instantly characterise that work as hers.

Like the dramatist she is, Renée introduces her cast straight up and gets down to business with striking economy – in the very first paragraph we have time, place, the entrance of the main character, natural disaster and stark tragedy, and by the end of the first page, we have met the woman who will shape her life more definitively than any other.

This is Rose, the mother who raised her firstborn to be a hard worker and non-complainer, and gave her one of life’s greatest gifts by teaching her to read. Rose did this before Renée was five, despite being violently widowed and left with three small children and no resources but her own. It’s an arresting opening that sets the tone and establishes the voice – bold, vigorous and dynamic, with no-nonsense humour and a telling way with imagery and dialogue. Uncle Cliff’s joke, Rose’s ability to hold a grudge, the kids’ places at the family table – bang, the scene is set and we’re straight into the kitchen, location of most family dramas. We also know we’re in the capable hands of a writer who puts family, especially families lead by staunch straight-talking women, right at the heart of her stories.

Who else but Renée would have put these families, these stories, on our stages? Who else would have told these secrets – tellingly, the title of Renée’s first professionally produced play? Patch 51 contains an extract – a middle-aged woman is cleaning the men’s toilets in a theatre. As she takes the audience into her confidence – easily, humorously – we hear about her boss, Mr Foster, who expects the job done well but wouldn’t dream of doing it himself, and about an unnamed girl she found once in these toilets, in the middle of an abortion gone wrong. Such a brief vignette, so everyday, but containing so much about hidden female lives, about class, about work, about expectations, about who carries the can and who cleans the loo.

You come to realise that this quilt is double-sided – that not only do all these patches combine to make a whole, and a whole life, but that all of Renée’s life is in every patch. Every scene contains the essence of the drama; every chapter has within it the meaning of the novel.

I read this memoir out of order, making the most of the piece-by-piece telling to start in the middle and end at the beginning, and go anywhere I felt like in between. There’s no right or wrong way to do it, it all adds up and meaning shines out of it without needing to be directly spoken of.

The ‘patches’ that come from life aren’t named – their title is just how they begin, their opening words. It’s an alluring table of contents, as tempting as the card that comes inside a box of chocolates. What do I choose – hard centre or soft, nut or crème? Suddenly, a memory: my grandmother, Vera Broome, only liked hard centres, so she poked in the bottoms of all her chocolates and left the runny ones in their dark brown cellophane trays to ooze quietly until the grandchildren came to visit. That kind of evocative flash happens again and again as you read the ‘Contents’ page, drawing you to sample the patches in any order that appeals and driven by what speaks to you – using your own life to construct your reading of someone else’s.

Titles like ‘When I was a kid’, ‘Being old. What’s it like? How does it feel?’, ‘My political views were formed very early’, ‘The year 1992 didn’t start off that well’, ‘I have always liked visiting cemeteries’, ‘We got into gear’, ‘I must have made a million meat loaves’, and the compellingly mysterious ‘It has come to this’ pulled me all over the place, but as I read in this higgledy-piggledy way I never felt lost or confused. There was no flipping back through the pages, no effort to construct a traditional ‘this-leads-to-that’ narrative – a picture emerged, piece by piece, not as it was laid down for me but as I chose to find it. This is how we get to know people in life – it’s never straightforward and it takes you by surprise.

Themes and people recur, and assert their importance by recurring. Reading is very important – Patch 12, very moving, centres on a key event in the development of this life-long love affair. The friendship of women is very important – many patches sing in praise of its comfort and complexity. Intimate partnership, the building and sharing of a life together, is also very important – two deep loves, one male and one female, are to be found among the patches. Theatre, both professional and amateur, is important, bringing life-affirming joy and indelible relationships and travel and laughter and opportunities and never enough money. Family is important – the bedrock, where we come from, the source of ourselves. Gardening is important – to make our everyday lives more beautiful wherever we find ourselves. Teaching is important – passing it on. Your body and its health is important, food and who you eat it with is important, telling the truth and looking things in the eye and not flinching are important.

The 88 patches of Renée’s life tell us this, whether taken from her experience or from the work she’s written. Her plays, novels, poems and stories make up patches too – what Renée has created is indelibly part of the life she’s lived.

It all adds up to an honest and arresting portrait, like the author photograph by Claudia Latisnere that engages you from the back cover. Here is Renée, looking straight at you with an undimmed gleam in her eye, taking you for a co-conspirator and fellow traveller on the journey of a lifetime.

This feeling of comradeship and connection is one of the things I love most about Renée’s work, and about this memoir. It rewards you however you approach it, especially if you come with a desire to more fully understand your own story in comprehending someone else’s. As a lifelong reader, Renée knows this is what readers do – she has given us a feast, a garden, a community hall, a sing-along, a comfy sofa, a kōrero, a very fine quilt.

FIONA SAMUEL is a writer and director, playwright, actor and Arts Laureate, awarded for her original body of work for television, radio, theatre and film. Her television drama Piece of My Heart, adapted from Renée’s novel Does This Make Sense To You? won Sunday Theatre’s highest ratings of the year. Fiona also wrote and directed Bliss: The beginning of Katherine Mansfield and wrote the screenplay for Consent: The Louise Nicholas story.